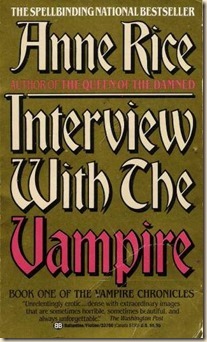 I have been a fan of Anne Rice’s Vampire Chronicles ever since I picked up Interview with the Vampire in 1999. I was living in New York at the time, and I went to Barnes & Noble on 51st & Lexington (in the CitiCorp Building), and came across the series. Even though I hadn’t read any of the novels, by this point I had seen the movie, starring Tom Cruise, Brad Pitt, Antonio Banderas, and a scene-stealing Kirsten Dunst. I really enjoyed it (and still do), so I thought I’d give the series a try. I proceeded to read all of the volumes then in print, and then bought each new book on day of release.

I didn’t think the first novel was perfect, and I found the fact that it was written as a conversation slightly strange – I was young and not very well-read or refined at the time. Nevertheless, it planted the seed that has had me eagerly await any new book by Anne Rice ever since. I consider the first two sequels, The Vampire Lestat and Queen of the Damned, as one of my five favourite novels of all time (I can’t read one without immediately reading the next, so I consider them as a single book).

Time to get to the point of the post: I have also been reviewing books for almost seven years, and movies and music for a few years more than that. I therefore found this post on Anne Rice’s Facebook feed, attached to a link, rather interesting:

Interview with the Vampire was actually a flop when it was published, severely hurt by a negative New York Times review by Leo Braudy. I’m not sure a review can kill a book today. But this was 1976, a different world. And a first novel, especially a very unusual one, was I think tragically vulnerable to the power of the Times… Now 37 years later Interview is (I’m grateful to say) an unqualified success and is still in print in hardcover as well as in paperback… 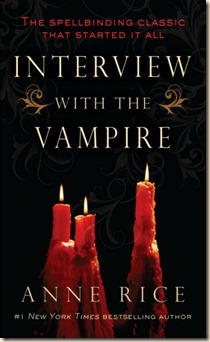 Sadly, the review is behind the New York Times pay-wall (which I still couldn’t read, despite supposedly having access to a specific number of articles per month…). Nevertheless, and perhaps a little strangely, Barnes & Noble’s listing for the book has the following quotation from Leo Braudy, apparently from “Books of the Century, The New York Times, May, 1976”:

“Anne Rice’s publishers mention the Collector and the Other, but it is really The Exorcist to which Interview with the Vampire should be compared, and both novelist William Peter Blatty and filmmaker William Friedkin, whatever their faults did it much better... The publicity tells us Rice is a ‘dazzling storyteller.’ But there is no story here, only a series of sometimes effective but always essentially static tableaus out of Roger Corman films, and some self-conscious soliloquizing out of Spider-Man comics, all wrapped in a ballooning, pompous language.”

I thought it was interesting that Rice said she’s “not sure a review can kill a book today”. I think she’s probably right. Not only is the internet allowing critiques, criticism and praise to spread all over the world, but also the fact that negative reviews only seem to generate extra interest in books. Take two (admittedly unusual) examples: 50 Shades of Grey, or Dan Brown’s The Da Vinci Code (which got, effectively, a bad review from the Vatican = publisher’s Holy Grail).

I also think Braudy is wrong his statement that “there is no story” in the novel. There’s quite a lot, actually. Yes, it’s “static”: it’s a book-length interview. What was he expecting? I don’t understand the Spider-Man connection, but it stands out, no? I don’t know the other references he presents, so I can’t speak to those. The connection to The Exorcist is an interesting one, but I don’t know either the book or movie version of that story well enough.

I’m sure this would have been a more interesting post if I’d had access to the review, but there we go [and if I hadn’t been writing it during a bout of insomnia, at 3:30am]. I’ll keep trying to get the text, and see if it adds anything to the discussion. Or, at the very least, offer some interesting quotations from it as/when I find them.

What do you think? Can negative reviews kill books today? If not, why not?

Posted by Civilian Reader at 3:38 AM

Email ThisBlogThis!Share to TwitterShare to FacebookShare to Pinterest
Labels: An Aside, Anne Rice, Can Reviews Kill Books, Interview With The Vampire, Leo Braudy, New York Times, Not a Review, Vampire Chronicles