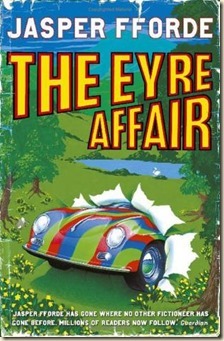 The first Thursday Next novel

There is another 1985, where London’s criminal gangs have moved into the lucrative literary market, and Thursday Next is on the trail of the new crime wave’s Mr. Big.

Acheron Hades has been kidnapping characters from works of fiction and holding them to ransom. Jane Eyre is gone. Missing.

Thursday sets out to find a way into the book to repair the damage. But solving crimes against literature isn’t easy when you also have to find time to halt the Crimean War, persuade the man you love to marry you, and figure out who really wrote Shakespeare’s plays.

Perhaps today just isn’t going to be Thursday’s day. Join her on a truly breathtaking adventure, and find out for yourself. Fiction will never be the same again...

It has certainly taken me a long time to get around to this series. I’ve always hesitated as a result of my general ignorance when it comes to many of the “essential” classics, fearing that many of the jokes in the series will just be over my head. However, as part of the Hodderscape review project, I finally got my hands on a copy of this novel. It’s pretty good, but also suffers from some debut issues.

I’m going to keep this review relatively short. First of all, because this is an old novel that has been written about at great length elsewhere. But also because I’m not sure if I was the best audience for it…

There is plenty in here that is whimsical, fun, and very clever. Fforde clearly has a love for reading and the classics, and especially the idiosyncrasies of his subjects. His writing style is brisk and uncluttered, making this an enjoyable and easy read. Thursday is a great protagonist, with a varied and interesting past, and an engaging and endearing voice. Her supporting cast is, likewise, fun to spend time with. The villain is genuinely sinister and creepy (indeed, maybe one of the best villains I’ve read in some time). The myriad special departments of investigation are amusingly delineated, also with a Harry Potter-esque variety for the more supernatural investigations and crimes. 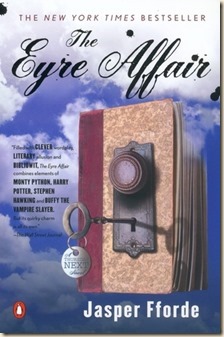 Despite all these positives, for me The Eyre Affair is also filled with literary references that, sadly, went over my head. I always seemed to be in the “experimental” year at school, when it came to picking set texts for English Literature classes. This has resulted in a complete ignorance of some of the greatest works of literature, including Jane Eyre. (Unless there was a film, in which case I come perilously close to being like Cher in Clueless...) Naturally, this has also given me a considerable inferiority complex…

Thankfully, though, Alyssa was on hand to fill me in on the particulars. I imagine, therefore, that the more literature you have read, the more you will get out of this novel and, one supposes, the series as a whole. That being said, don’t let this put you off if you haven’t read Jane Eyre or other literature that is mentioned herein. There is plenty on offer that is in a similar humorous vein as Terry Pratchett’s novels, so you won’t be adrift in a sea of allusion and references. The story is strong and stands on its own, I think.

As I mentioned at the start, the novel suffers a little bit from debut-itis, in that Fforde comes across as rather self-consciously clever, not to mention stuffing the early pages with a lot of new and whimsical information and nuggets of altered history and literature. At first, I was worried I wouldn’t like this much at all, or at least as much as I had hoped.

However, I persevered, and ultimately rather enjoyed the caper and characters. Will I pick up the next in the series? Probably, as I have it on good authority that they get better and better.

This is a fun, clever, slightly silly novel that will appeal to lovers of literature and reading. For those people, I would say this is a must read.

The Series: The Eyre Affair, Lost in a Good Book, The Well of Lost Plots, Something Rotten, First Among Sequels, One of Our Thursdays is Missing, The Woman Who Died A Lot, Dark Reading Matter (forthcoming)