An Interview with DAVID TOWSEY 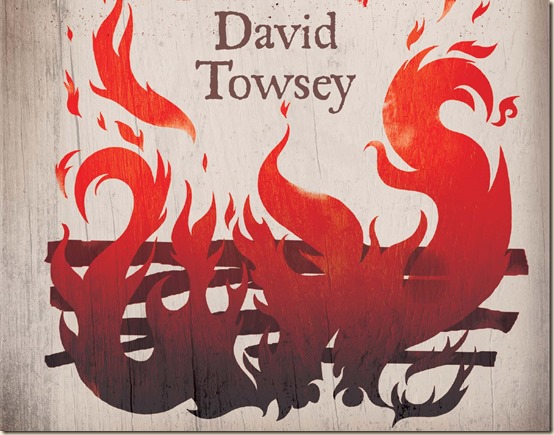 David Towsey’s debut novel, Your Brother’s Blood caught my attention a few months ago, and ever since I have been eagerly awaiting my chance to read it. Thankfully, I recently got my mitts on a copy, so I hope to start it sometime next week. In the meantime, his publisher has set up this interview, in which I quiz David on his writing, how he got into genre fiction, and more. If you wanted to check out the novel for yourself, be sure to read this excerpt.

Let’s start with an introduction: Who is David Towsey?

I’m twenty-eight. I’m finishing a PhD in Creative Writing at Aberystwyth University – where I’ll start lecturing full-time in September. I guess you could say I’m a geek or nerd – if such labels are helpful. I play computer games, specifically MMOs, which I’ve been a regular player of since I was fourteen and first got hold of Ultima Online. I also enjoy playing Magic: the Gathering at a fairly competitive level. But between all that gaming and writing I try and keep active by playing squash and swimming at least twice a week.

Your latest novel, Your Brother’s Blood, was recently published by Jo Fletcher Books. How would you introduce the novel to a potential reader? Is it intended as part of a series?

When people ask me about the book I tend to see if they’ve read or seen The Road. If they have, I say it’s a lot like that. Except Your Brother’s Blood follows a father and daughter. And the the father is a “zombie”. If they haven’t, it becomes more difficult. It’s a novel that sits somewhere between a road-movie and a zombie-western. For me, it focuses on family relationships that come under strain – sometimes through normal situations and sometimes because of more extreme circumstances. Your Brother’s Blood is the first part of a trilogy that follows a central family, the McDermotts. 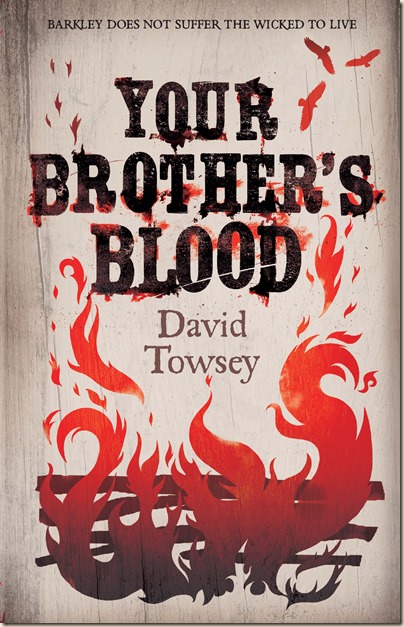 It’s always a bit difficult to pinpoint where a novel starts for me. That said, a few years ago my girlfriend joined a group in our town called “Transition Town”. It’s an organisation that, as I understand it, wants to prepare communities for a major change in our lifestyles, such as oil running out. This got me thinking about how the modern era might end, not in a fiery apocalypse like many novels suggest, but a slow winding down. Not sure why that had to involve the undead, but still.

More generally, and this is a totally corny answer, but my girlfriend is a constant source of inspiration. We’ve been together for ten years. She’s a novelist and poet. We read each other’s work and bounce ideas off each other. When I think writing is awful and I hate it and it’s too hard, she’s there to help. Bleurgh, right?

How did you set your novel apart from other zombie apocalypse novels available? And, why zombies?

Firstly, I never set out to write a zombie novel. Once I figured the western element I just wondered what it would be like to live forever. That makes for slightly less exciting characters – no tension if no one can die. So I decided on the Walkin’ – a kind of suspended animation where a character is in exactly the state they died in but are able to think and talk, and finally die. This is what makes Your Brother’s Blood different. The reader really gets inside the head of the Walkin’ characters to see what they want, what they’re scared of, and how they form and maintain relationships. This lets me play with different themes and ideas in a way that a traditional zombie narrative might find difficult.

One thing I’ve noticed about zombie texts such as The Walking Dead is that the zombies are arguably plot devices that increase tension. Need characters to move to a different setting? Zombie horde. Need a punchy way to end an argument? Zombie attack. Need a powerful emotional moment? A character has to kill a now-zombie-relative. I’m not knocking it, it’s gripping stuff. I just wanted to do something different. I wanted to bring the zombies into the emotional content. To do that without generating humour (like Warm Bodies), I felt I had to change the rules of the zombie. 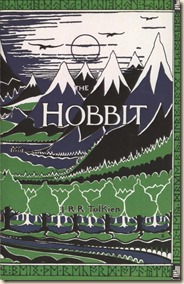 My introduction to genre isn’t a very original story. I was on a family holiday where I was the only child and extremely bored by lots of driving and visits to cathedrals, etc. My mum gave me The Hobbit and I devoured it. I was annoyed whenever my family forced me to go on walks or eat meals that meant I had to stop reading.

Being a writer is okay. I find it difficult to agree with people who say it’s the most amazing thing ever, or a painful and traumatic experience. I get to decide when I wake up. I can wear whatever I like “to work”. I try and keep myself fairly disciplined to a 9-5 working day, but I’m flexible. I don’t beat myself up if I miss a morning due to a dentist appointment.

As for practices, I always write to music. I blogged about why recently on my website. I find cups of tea too distracting – I have to do one or the other, or one suffers. I have a seventeen button mouse, but that doesn’t really help me write. Research in a creative sense is mostly reading a lot. Reading is key – plenty of better writers than me have said that. 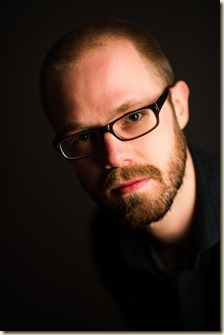 I first thought about seriously trying to become an author at the end of my undergraduate degree. My friends were all talking about what they wanted to do, jobs they were applying for, etc. I was kind of at a loss. I’d enjoyed the writing part of my degree and wanted to avoid a real job at any cost. I worked some dead-end jobs, like everyone does, and then went back into academia to do a Masters degree. Being an author was always the goal, but I didn’t really believe it would happen. These days there’s no shortage of people telling you have difficult it is to become a published author. And then you have more people telling you how difficult it is to live off your writing. They’re right. I kept going back to university, hoping that the combination of more qualifications and more time to learn about writing might help. It did, a little. But like every published author I needed my share of luck.

The start of my undergraduate degree was my first foray into writing. I didn’t write as a kid – which makes my “story” less Disney-appropriate. I started out writing horrendous fantasy short stories. Thankfully, a lecturer pointed out that many fantasy texts were a thousand pages, not a thousand words. With this revelation in mind I tried realism, got bored, and ended up in SF. SF seemed more appropriate for the short form. I still have many of the stories I wrote during these years, some of which I managed to place in small magazines. I do think of them fondly – they were an important part of getting where I am now.

I think SF/F is in a great place at the moment. The high profile successes of recent times have made more publishers keen to expand their lists into genre. It’s easy to be cynical about moves like that, and it is probably healthy to maintain some level of cynicism, but it’s hard to argue that the genre is suffering due to more interested publishers. Your Brother’s Blood was taken on by a relatively recent imprint, Jo Fletcher Books, and I was fortunate enough to find such enthusiastic and professional people to handle my début. New imprints such as JFB have a real drive to find new and diverse voices – which to me sounds like a basis for a healthy genre.

I like to think my work fits into a tradition of considered experimentation within SF/F. The genre and its readers seem to be more tolerant of less successful experiments than work that plays it safe and sticks to a formula. With Your Brother's Blood, I’ve tried to blend two distinct genres in the Western and the Zombie novel, and I’ve tried to do it with care and respect. A lot of “mash-ups” lean towards the comical – generating humour from unusual juxtapositions and playing with expectations. I wanted to avoid that comedy; not because there’s anything wrong with that kind of work, but I relished the challenge of tackling ideas in a way that might surprise a reader. It seemed to me that SF/F was the perfect genre for this kind of work.

I’m currently working on the third book of the Walkin’ Trilogy. The second is in the editing stage, which is really when the hard work begins. I’m also organising my PhD novel for publishers, which is a bit different from the Walkin’ books. There’s certainly plenty to keep me busy.

My reading time is all tied up by my PhD at the moment. Fiction-wise I’m reading books by the authors who will be my external examiners. I just finished George Green’s Hawk, and I’m about to start Gerard Woodward’s Nourishment. I’ve also recently finished Before the Legend: The Rise of Bob Marley by Christopher John Farley – also PhD related. There’s been a lot more reggae played in our house of late... 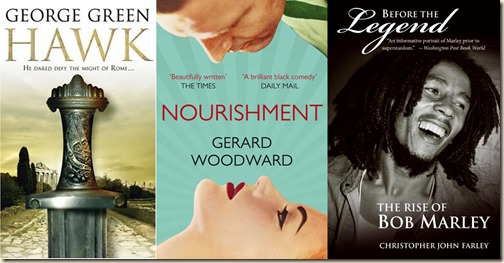 I’m pretty much addicted to ice-cream. It’s a bad day when I don’t have any. But it’s been a good year with Ben & Jerry’s introducing new flavours to the UK market. I’ve been to the States and the pictures of me in front of a freezer stocked floor-to-ceiling with different flavours are... surprising.

It’s a close call between my girlfriend and I buying our first house and season four of Game of Thrones. I’m pretty sure she’s looking forward to GoT more…

Your Brother’s Blood is published by Jo Fletcher Books on August 29th 2013. For more updates, news and whatnot, be sure to follow David on Twitter.