First up, a hat-tip to Abhinav for sharing the link on Facebook, which is where I spotted it [everyone should check out his reviews on his blog, on Founding Fields, and follow him on Twitter].

Sophia McDougall has written a very good piece for the New Statesman, with an attention-grabbing headline: “I hate Strong Female Characters”. It’s an interesting article, and addresses what a lot of society views as a ‘Strong Female Character’, and the double-standards that exist when characterising a hero or heroine as ‘strong’. The whole article is well worth reading, so off you go and read it…

One paragraph in the piece got me thinking. Not really about the topic of the article, but something related to an example McDougall used to make part of her argument:

“Is, say, Sherlock Holmes strong? In one sense, yes, of course. He faces danger and death in order to pursue justice. On the other hand, his physical strength is often unreliable – strong enough to bend an iron poker when on form, he nevertheless frequently has to rely on Watson to clobber his assailants, at least once because he’s neglected himself into a condition where he can’t even try to fight back. His mental and emotional resources also fluctuate. An addict and a depressive, he claims even his crime-fighting is a form of self-medication. Viewed this way, his willingness to place himself in physical danger might not be ‘strength’ at all – it might be another form of self-destructiveness. Or on the other hand, perhaps his vulnerabilities make him all the stronger, as he succeeds in surviving and flourishing in spite of threats located within as well without.”

This made me wonder if there were any female characters that I’d read (recently or otherwise), who maybe adhered more to this archetype of (anti-)hero. And, I actually think I’ve come up with a speculative-fiction contender for the modern successor of Sherlock Holmes. There is, after all, a female character who can be described similarly to McDougall’s Sherlock. To reiterate:

Who am I talking about? Chess Putnam, from Stacia Kane’s Downside Ghosts series (published by Voyager in the UK and Del Rey in the US).

Chess is an addict, she is a gifted (supernatural) detective, she can be alternately abrasive and vulnerable, she can handle herself in a fight (against ghosts and against corporeal antagonists). She sometimes manipulates those around – on the job, but also as a way of hiding her substance abuse. She’s certainly brave, charging ahead into situations that would make me bug out, screaming like a petrified kitten. Even regarding the more ‘mundane’ elements in the above description, Chess can tick them off: Bohemian (she lives in a converted church on the wrong side of the tracks), vain, neurotic, untidy, and fastidious (in her spell-making, for example). I haven’t yet seen anything that suggests Chess is quite a “polymath genius”, but she has a considerable breadth of skills. At the same time, sometimes Chess needs help from “sidekicks”, and has a couple of her own Watsons – most notably Trouble Terrible,* who she does not always treat well or fairly.

So. There we have it. Chess Putnam is our contemporary Sherlock Holmes. Anyone have any other suggestions who could fill that role?

* Update: The original version of this post got the name wrong. Apologies to Stacia!

Incidentally, Sophia McDougall is the author of the Romanitas trilogy – Romanitas, Rome Burning, and Savage City (published by Gollancz) – which you should all be sure to read, as well. 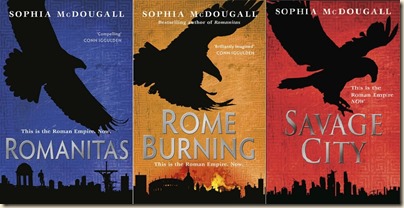