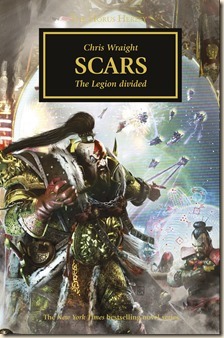 This is a review of the first quarter(-ish) of the 27th Horus Heresy novel, which is being serialised through Black Library’s website. Reading these, one is left with a bit of a conundrum: how do you review the first three-of-twelve parts of a novel? What constitutes a spoiler, for example?

I’ve decided to approach the installments as if they were the first quarter of a novel, which means all the content is fair game for discussion and mention (although, I have addressed each episode individually, which has made this a rather long review).

I wonder if it might have been better to organise some kind of forum, in which fans of the series could discuss the episodes and novel? There’s so much in these three parts, and given the week-long gaps between each new episode, I think it lends itself quite well to forum-style engagement and discussion.

Anyway, back to the review. First up, here is the synopsis for the full novel:

Jaghatai Khan and his White Scars Legion must choose – the Emperor or Horus? Fresh from their conquest of Chondax and the discovery of Horus’s rebellion, Jaghatai Khan’s warriors stand divided. Long considered one of the less trustworthy Legions, many of the White Scars claim to owe their loyalty exclusively to Terra, and others still to the Warmaster and his warrior lodges. But when a distress call from Leman Russ of the Space Wolves brings the wrath of the Alpha Legion to Chondax, the Khan’s hand is forced and the decision must be made – in the great war for the Imperium, will he side with the Emperor or Horus?

The first Episode was not the strongest start to a novel. It didn’t fully grab me, like most other Heresy novels have – this is, perhaps, a real danger when serialising a novel that has not been specifically written for this format. (Although, it should be stated from the outset that the first three episodes have been chopped up rather well.) It’s also tricky, though, to address: taken as an individual read, it wouldn’t have left me 100% convinced that I wanted to read on. Because I had the next two episodes, though, I can say that Scars could shape up into one of the strongest Heresy novels.

The story opens with two Astartes aspirants, Tamu and Haren. The two characters are going through trials for what I had assumed were the White Scars. It took a few pages to realise they weren’t both trying out for the same Legion, though, which at least explained the different types of name (Haren Svensellen didn’t sound particularly Asian-influenced, as most White Scars’ names are). Haren, it turns out, had been marked for selection by the Luna Wolves, but is reassigned to the White Scars at the last minute. It’s a little bit muddled, if you haven’t memorised the Legion numbers (as opposed to names), but it quickly sorted itself out.

The mix of ‘Asian’-style terminology (“an owlish Khitan from Choq-tan named Jeldjin” – a bit of a clunky example) seemed at times to be rather heavy-handed or excessive. Wraight throws out a lot of new jargon without the best integration. Less, or a more gradual introduction, would have been better. Interestingly, we learn through Haren’s experiences, the White Scars prefer recruits from the Asiatic hive cities, and he finds their “archaic customs, their introversion, their exceptionalism” irritating. The first episode, then, offers an interesting, if truncated, alternative induction story. I liked this a lot, as it suggests that inductions are not always as harmonious or clear-cut as we may have been led to believe.

To make things a bit more confusing, at the end of Episode I, Tamu changes his name as he is inducted, to Shiban. Haren becomes Torghun.

There’s some foreshadowing, as Tamu asks if Terrans are as tough as Chogorians:

“I am glad you are a poet. Only poets can be true warriors.”

“Do the Terrans think the same way?”

Not difficult, therefore, to spot that Tamu/Shiban and Haren/Torghun are fated to meet. 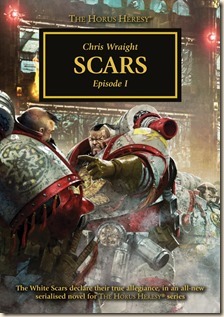 In Episode 2, the story’s scope widens, and we are introduced to a number of other key characters. Ilya Ravallion, a General in the Departmento Munitorum, for example, who is charged with handling the White Scars’ logistics. Through Ilya’s eyes, we get some good commentary on the White Scars’ style – both martial and temperamental.

“They were the elusive ones, the Legion who roamed too far, the ones who had almost broken away entirely, rampaging outwards from the thrust of the Crusade and angling off into the deep void. Prodigal, her superior had called them.”

Assigned to the White Scars, Ilya feels she’s been given a surprising final assignment: “organising the unorganisable, imposing some sense of discipline upon a Legion that treated warfare like a kind of carefree, joy-filled art form.” In the third episode, discussed below, this theme is revisited, and we learn that Ilya “had come to find the White Scars’ amiable indifference to Imperial edicts more endearing than exasperating.”

And finally, we get some examination on Jhagatai Khan, in relation to his brother Primarchs:

“They said Horus Lupercal was the finest commander in the galaxy. They said that the Angel Sanguinius was the mightiest in combat, or maybe Russ of Fenris, or maybe poor tortured Angron. They said Guilliman was the greatest tactician, the Lion the most imaginative, Alpharius the subtlest. None of them gave the Khan a second thought. But then, they hadn’t seen him [in combat].”

We learn a bit more about Shiban and Torghun, and also start to get a glimpse of a rift between Terran-born White Scars and Chogorian-born Astartes. Torghun, for example, is a member of a Lodge (which haven’t featured much in recent HH fiction), which is made up exclusively of Terran-born Astartes. I have a feeling that the rift within the Legion is going to be borne of these hostilities. It’ll be an interest addition to the canon, too – despite their obviously aggressive, homicidal approach to non-humans, none of the Heresy (or WH40k) fiction has dealt with human racial tension. If handled well, this could be very interesting indeed.

The second episode also gives us more idea of the time-period for the novel – the Space Wolves have already burned Prospero (the events of McNeill’s excellent A Thousand Sons and Abnett’s Prospero Burns), and also after the Isstvan Dropsite Massacre. The final portion of this part focuses on the Space Wolves, who are chaffing at having been sent away to discipline Magnus’s Legion – thereby ensuring their absence from Isstvan, which in turn likely helped sway the conflict in favour of the traitors. Their task also prevented them from coming to the aid of their now-fallen brother Legions. Then, while preparations are underway for the Legion return to Terra, an Alpha Legion fleet appears out of the warp...

One of the most interesting scenes is at the start of Episode III. It is set in the Observatory of the Imperial Palace on Terra. Malcador the Sigillite, Primarch Rogal Dorn and Commander Valdor of the Legio Custodes are discussing the state of the galaxy and the newly-erupted Civil War. Through their discussion, we learn just how thin information is.

“I never asked you how it felt, Constantin, to see Prospero burn. Did even your callous soul blanch at that?”

Valdor didn’t miss a beat. “No. It was necessary.”

“Was it?” sighed Malcador. “I did not give the order. I wanted Magnus censured, not destroyed. What was it that made Russ do it? You never could give me an answer.”

Dorn exhaled impatiently. “You know all of this, Malcador. You know all that happened there, just as we do.” He was coldly furious. “Does this need repeating? The Warmaster is at the heart of it, poisoning everything we do, and now he has the blood of three more Legions on his hands.”

This chapter expands once again our understanding of the rivalries and loyalties between the Primarchs. It also re-iterates the strange, almost lonely position of the Khan. The Khan was only really close to two of his brothers: Horus and Magnus. Naturally, this produces some concern among the leaders of the Imperium. As Valdor states, “So there it is. The Khan’s known allies, Horus and Magnus, traitors both.”

As with the aforementioned novels by McNeill and Abnett, Wraight ties in the treason to the events at Nikaea, when the Emperor decreed that all Legions must disband their psychic corps (the Librarians, etc.). As Malcador laments,

“As I said at the time, Nikaea was the root of this. We should have explained things better, though there were reasons, some of which we could never disclose, not there... We were too caught up in what needed to be done. That may be the tragedy of it all – we did not explain.”

Thankfully, we finally meet the Primarch Jaghatai Khan. He had felt rather absent up to this point… As it turns out, Khan has no idea what occurred on Nikaea, hoping instead that Yesugei (who appears to be his second-in-command?) was successful in helping keep the Librarius alive in the Legions.

The Space Wolves and Alpha Legion also face off in the void.

“I wondered if it would become easier,” Bjorn mused.

“If what would?” asked Godsmote.

To return to the pending rift within the Legion, we see a little bit more of the Terran-born Astartes’ frustrations.

“As was typical, the White Scars straggling Legion structure made coordination difficult... The Chogorians seemed happy enough with that. They were used to their inscrutable primarch and his impulsive decision-making. The Terrans took it harder, at least those who hadn’t long resigned themselves to the Legion’s haphazard methods of command and control.”

Given that we’re told the process can take well over a decade, I find this a little strange. It’s an interesting development, certainly, and one I haven’t seen in other Heresy fiction. Therefore it is welcome, not to mention also providing the motivation behind the Legion split easier to swallow, but at the same time... They were made into Astartes, elevated to become super-humans. So they didn’t become Luna Wolves – we’ve been led to believe that all humans see all Space Marines as the pinnacle of supra-human evolution, and are in complete awe of them. It seems almost petty that the friction effectively arises because some of them weren’t pick for the right ‘team’.

All in all, despite the weaker first Episode, Scars is shaping up to be a pretty interesting addition to the Horus Heresy series. Wraight’s writing is well-crafted, and the story moves at a brisk, smooth pace. I hope we get some more White Scars background, though, and perhaps some of their Primarch’s history. I haven’t read much about the Legion before (and have read neither Wraight’s previous novel Savage Scars, nor the limited edition novella, Brotherhood of the Storm).

I do, however, think I would have preferred to read this as part of the complete novel, so I’m not sure if I’m going to continue reviewing the episodes in collected chunks, or just wait for the novel to be complete. Part of this is just down to my own personal impatience with reading in small chunks – I much prefer to devour a novel in a relatively quick period, rather than in slow, weekly drips. It’s an interesting experiment, at least.

Posted by Civilian Reader at 4:41 PM