Guest Post: And Now For Something a Little Different - James Lovegrove on AGE OF GODPUNK 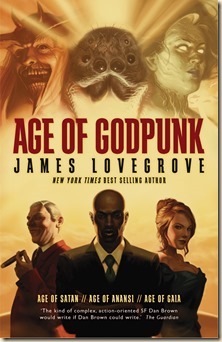 My latest Pantheon book, Age Of Godpunk, is not like the others. For a start, it’s an omnibus of three novellas, not a novel. But it isn’t military-SF either. If anything, the three tales are urban fantasy. The themes are the same, though: gods and men and the interaction between them; the nature of belief; acceptance of and/or rebellion against divine authority.

I have to say that all three novellas are pretty personal, too.

They have a setting in common: the city of London. Now, London is a place about which I am more than a little ambivalent. On the one hand, I love to visit our capital and avail myself of the many cultural, culinary, retail and social amenities it has to offer. On the other hand, I’ve lived there at various periods of my life and never felt truly at home or comfortable. I’m from East Sussex. I belong near the south coast, in a county with hills and trees. After any trip up to the Big Smoke, I’m always happy – relieved, even – to return to fresh air and vistas.

So the Age Of Godpunk novellas reflect my mixed feelings about London. They also reflect my mixed feelings about belief, faith and religion. Each of them can be read on two levels. You can take the appearance of the various deities in them at face value, the metaphysical manifesting as real, literal beings. Or you can view them rationally and empirically, with the gods existing only in the minds of the protagonists, phantoms, fantasies, delusions.

More specifically, each novella touches on themes drawn directly from my own life. These are the most personal stories I’ve written in ages, if not ever. 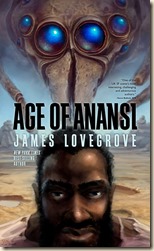 The first of them, Age Of Anansi, is about storytelling, which is the thing I try to do for a living. Anansi is the spider god of African tradition, a liar and a trickster, a woefully inept would-be adulterer, and more often than not the hapless victim of his own schemes – ensnared by his own webs. The tales told about him crossed the Atlantic in slave ships and came to America, where they mutated over time and metamorphosed into the Br’er Rabbit fables.

In Age Of Anansi, his spirit apparently possesses a stuffy London-based barrister who is then cajoled into attending a once-every-generation contest among trickster gods in California. In many ways the contest is like an SF convention, but with every attendee attempting to outsmart and outshine the others. So, just like an SF convention, in fact. 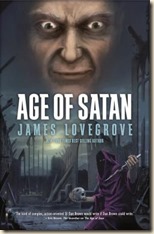 Age Of Satan sketches the life of a young man from school in the late 1960s to the present day. He believes he has sold his soul to the Devil, sort of by accident, but gradually learns that there’s more to the Lord of the Flies than the Bible would have us think. Although the character, Guy, is born about a decade and a half before I was, he attends an all-male boarding school, as I did, and he travels to Thailand, as I did. He’s kind of an avatar for my younger self, sharing many of the passions and anxieties I had while growing up.

As for the third novella, Age Of Gaia, it may be regarded as a sequel of sorts to my 1999 novella How The Other Half Lives, which was one of the first titles to be published by the wonderful boutique imprint PS Publishing. That tale was about a plutocrat who keeps a man locked in his cellar and brutally abuses him in order to ensure himself continued good fortune and enhance his already obscene wealth. Gaia features another plutocrat, Barnaby Pollard, who has made his billions from oil and coal, heedless of the environmental damage that fossil fuels cause. He meets a woman and develops a relationship with her that directly affects both his business and his attitude towards Mother Nature.

There’s a scene in the story which reimagines an event from my own childhood. I was perhaps twelve years old when a bypass was built, circumventing my hometown. The road was driven straight through a patch of countryside where I and my friends regularly played. We had regarded this place as ours, a rural sanctuary, a wild spot where we, too, could be wild. The people of the Highways Agency (or whatever it was called back then) didn’t know that, nor would they have cared if they had.

I took the road building as a personal insult and mourned the fact that fields and woods had been bulldozed and two lanes of tarmac laid down in their place. When something similar happens to the young Barnaby Pollard, however, I show him celebrating the event, applauding the arrival of speed and progress and not giving a damn about any lost greenery. It’s a formative moment in his life, a pivotal experience, which has ironic echoes later on in the story.

As a rule I try to avoid bringing myself into my fiction. I don’t consider my life to be that interesting, and anyway I prefer to write about the unreal and the fantastic, the things that aren’t as opposed to the things that are. Somehow, though, with these three novellas I just couldn’t help it. The personal crept in, almost without my realising. With hindsight, I think that’s one of their great strengths.

Age of Gaia will be published on September 12th 2013, by Solaris. For those of you in reach of London, Blackwells on Charing Cross Road is holding a launch event a week earlier, on September 5th. Jared Shurin, of the cult genre website Pornokitsch, will hold an evening in conversation with the author.

Be sure to check out James Lovegrove’s website for more information on his novels and so forth.

Posted by Civilian Reader at 9:04 AM