It seems like Chris Wraight is having a very good, busy year. Alongside his Space Wolves and Horus Heresy work, he has a couple of Warhammer fantasy novels coming out, too. Today, I want to highlight Master of Dragons, part of the Time of Legends series, which is due to be published by Black Library in November 2013. Here’s the synopsis…

The epic war between dwarfs and elves continues.

For millennia, the elves of Ulthuan and the dwarfs of the mountain realm have been friends and allies. Now that time is over and the War of Vengeance has begun. Prince Imladrik, master of dragons and Ulthuan’s finest warrior, is ordered to leave his beloved homeland and lead his host in a war he does not believe in. Facing the fury of the dwarfs, the jealousy of his brother and the ever-present threat of Malekith’s dark elves, Imladrik must balance his love for his wife and home with the thrill of battle.

I’ve read a fair bit of Wraight’s work, now, and I’m really looking forward to this novel. After all: dragons! I really must catch up with his Space Wolf novels, too (Blood of Asaheim and the upcoming Stormcaller – both of which I’ll post about tomorrow)… If you want a taste of his work with the High Elves, be sure to check out his novella, Dragonmage. 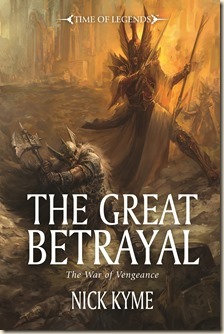 I think the novel is a sequel (of sorts) to Nick Kyme’s The Great Betrayal, which is also getting a re-issue in the same month. Here’s the synopsis for that novel…

The war between dwarfs and elves that shaped the Warhammer world begins.

Thousands of years before the rise of men, the dwarfs and elves are stalwart allies and enjoy an era of unrivalled peace and prosperity. But when dwarf trading caravans are attacked and their merchants slain, the elves are accused of betrayal. Quick to condemn the people of Ulthuan as traitors, the mountain lords nevertheless try to prevent conflict, but the elves’ arrogance undoes any chance of reconciliation and war is inevitable. At the city of Tor Alessi a vast army stands against the dwarfs. Here Snorri Halfhand, son of the High King of the dwarfs, will meet his destiny against the elven King Caledor as the first blow is struck in a conflict that could bring about the fall of two great civilisations.