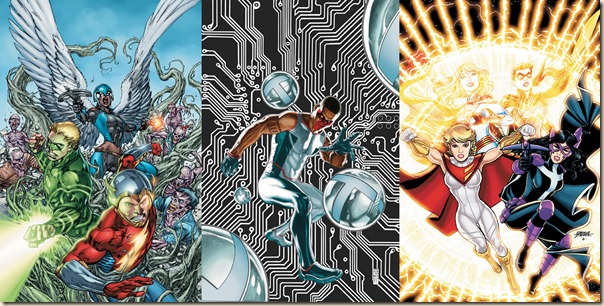 There are three series in DC’s New 52 that feature inter-dimensional travel shenanigans, so I thought I’d compile a joint review of all three: Earth 2, Mister Terrific and World’s Finest.

Mister Terrific actually travels between these dimensions, too, so he has a way of anchoring the series together (although, he features more in later issues of World’s Finest, which are not reviewed here). I’m not sure if I’m reading too many New 52 titles, now – I seem to have a shorter fuse when it comes to quality, and am finding myself more inclined to drop series quicker. Or, equally possible/likely, I’m more of a traditionalist, and just prefer the ‘core’ characters that make up the Justice League and their solo-series. Certainly, I’m finding myself really liking Geoff Johns’ series (Justice League, Aquaman and Green Lantern).

Anyway, back to these three series… I had very mixed feelings about them all, and was quite disappointed with two of them. I’ll keep these reviews short, therefore, otherwise I’ll just feel like I’m flogging a dead horse. Also, as with most books I read and don’t connect with, there are some spoilers below. 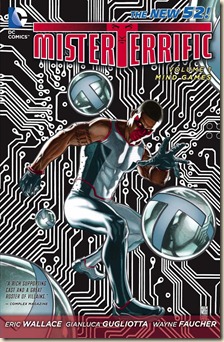 Introducing the electrifying new villain Brainstorm, who is determined to bring Los Angeles to its knees – beginning with Michael Holt!

I picked up all eight issues of Mister Terrific during one of ComiXology’s sales. I read the first three. I’ve not read the rest of them, and each time I open up the fourth to start reading… I just give up before I turn a single page. This is my first DNF of the New 52 series collections (the panel, below, from issue #2 was just too apt to ignore and not include – it perfectly reflects my own feeling when reading this series). I’d be happy to put some of this down to a complete lack of familiarity with the character. But really, I just think this series wasn’t up to scratch.

I’m always amazed when a comic book, a visual-dominated medium, has more telling than showing in it. It’s littered with pseudo-science, cliché terminology, and frankly sub-par writing. I can understand fully why it was cancelled. Even the revelation at the end of #3 felt forced, where it should have had a huge impact on the story and reader.

The artwork’s not bad, though, and I think the premise has (or, at least, had) a lot of potential. But from what I read in the first three issues, I just can’t generate the enthusiasm to finish it – even though there are only about 100 pages left of the entire series.

If someone can tell me that it got better before the ending, I’ll get back to it. Otherwise… 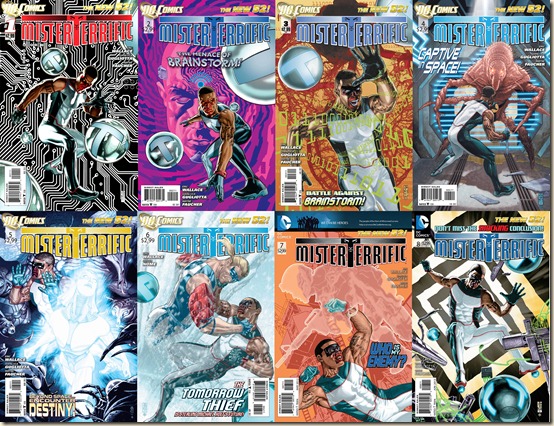 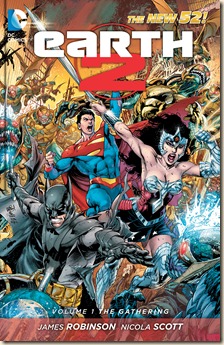 Who are the heroes of Earth 2? When the Batman, Wonder Woman and Superman of Earth 2 fall in battle, it’s up to a new breed of heroes to come together to combat the returning evil of Apokolips!

I read and rather enjoyed the first issue of this series, when it came out. As with so many series, I decided to hold off until the first collected volume/storyline was available, and on the strength of the debut issue had pretty high hopes. Sadly, these expectations were not met. The premise is interesting, certainly, and I like the idea of alternative versions of these heroes fighting their own battles, completely removed from the ‘normal’ DC Universe heroes and storylines.

However, despite the strong start, this series is riddled with irritating storytelling. For example, the Green Lantern of this world: before he is the Green Lantern, he’s some high-flying celebrity. He proposes to his partner, and we get a good idea of how devoted they are to each other. Then, a handful of pages later, there’s a train crash. His partner dies, and he… moves on rather quickly and easily. I’m not sure if this was an editorial decision, just a way of quickly providing the character with a motivational life-tragedy (in itself, rather cliché). Certainly, given that the character was trumpeted as the first(?) gay major DC character, the quick dispatch of the love interest (whose name I can’t remember) smacked of tokenism.

The storyline itself was just rather flat, and didn’t compare favourably with Robinson’s other stories and series that I’ve read. Given that he’s broken with DC under not the happiest of terms, I can’t help but wonder if this series suffered from overbearing editorial control. In many ways, it’s playing it safe – great, big bad-guy, terrorising Washington, killing everyone (he’s some kind of death creature, Grundy). Instead of getting a sense of any real peril, the threat posed by this big bad ends up forming the crux of a team-building exercise.

The artwork is rather good, I must say, which only makes the lackluster storyline all the more disappointing.

If I’d taken any notes while reading this, I probably could go on at greater length about the things that niggled, but I don’t really think there’s much point. Overall, this was disappointing, leaving me rather nonplused and uninvested in the characters. Will I try the next story-arc? Well… perhaps. A couple of other comic fans, whose tastes are often similar to my own, enjoy this series quite a bit. So… maybe. But not in the near future. And only if I can find Volume 2 or the individual issues on sale. 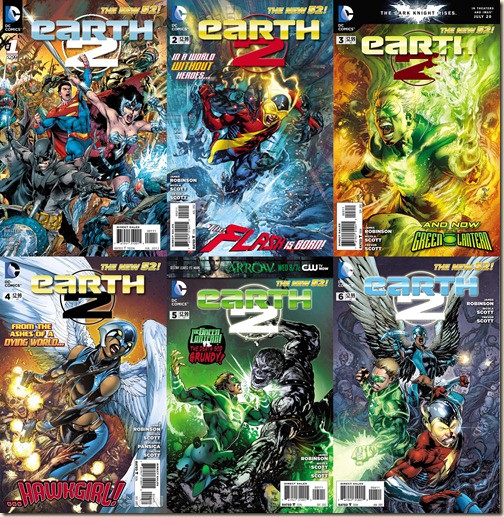 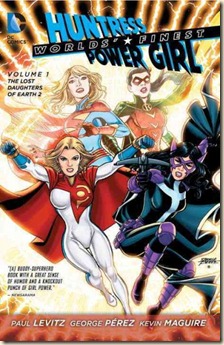 Discover why these two heroes are stranded on our Earth – and what it means for the heroes of the DC Universe.

The #0 issue (which originally came out mid-way through this story-arc) takes place two years before the events of Earth 2 #1. We’re introduced first to Helena of Earth 2. She is Bruce Wayne and Selina Kyle’s daughter. She is also the Robin of this universe. We meet her on the hunt, shadowed by her mother, and afterwards we learn that Bruce is not at all happy that she went out without him.

Then we meet Superman, who is trying to train Supergirl, while mourning the death of Lois Lane. It’s a much quicker introduction than Helena’s, but it gives us pretty much everything we need to know.

The rest of this chapter tells us of how they met, and the tragedy that brought them together (though Supergirl still wishes to keep her identity a secret). 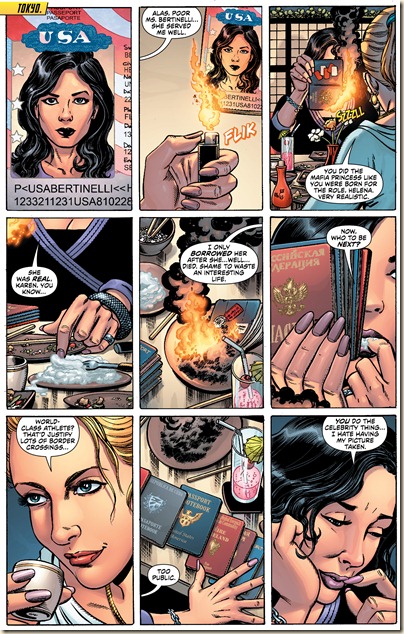 The first story-arc, then, takes place on the main DC world, is pretty good. The first chapter has a fun nod to Huntress’s past identities in the DCU (Bertinelli, the “mafia princess”, for example – above). I’d already read #1 before picking up the rest of the first issue volumes, and rather enjoyed it. The pair of heroines, who have very different approaches to their vigilantism are nevertheless fast-friends. They end up in Japan, and confront Hakkou, the irradiated man. Each issue also contains flashback sequences, which tells us of the first two years Helena and Supergirl-now-Power Girl spend in their new home. It’s a nice balance of action and a twist on a coming-of-age story (a “coming-to-terms” story, perhaps?). 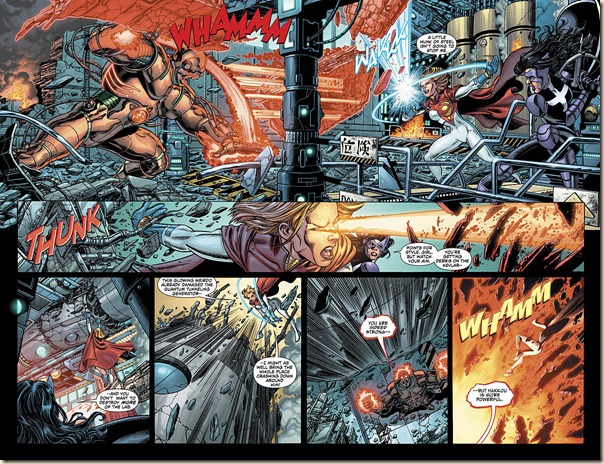 There are clear connections between this series, Earth 2 and Mister Terrific – both of which, as mentioned above, were not as good as I’d hoped they would be. This series is more fun, but it also feels like it’s not quite settled, and a bit thinner than it could have been. We’re still learning about the characters, their dynamic, and so forth, so at least Levitz gives the impression of not being in as much of a rush as Robinson to establish this new team’s dynamic. It is pretty good, and I like the characters, so I have no doubt I will read some more. Given the slight shakiness, though, I’m not wholly sold on this – it does bear more examination, though, and I hope things will take off better in the second story-arc.

In terms of the artwork, I really like the style for for the ‘present’, but the flashback art seems much more inconsistent, with characters sometimes deformed or distinctly different in appearance than they should ever be (faces change shape, rather than expression, for example). There were a few emotional moments that were robbed of their punch because the artwork/pencils looked cartoony (especially the tragedy at the end of #0). Both styles feature nice, bright and sharp colours, though. 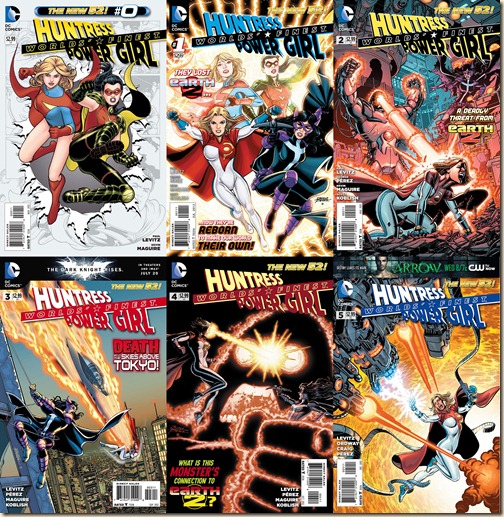