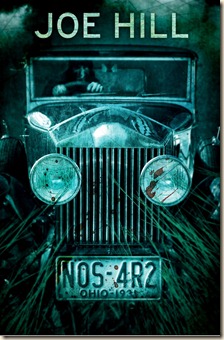 An old Silver Wraith with a frightening history. A story about one serial killer and his lingering, unfinished business.

Anyone could be next.

I’m not a big reader of horror. I’m not really sure why, though, as I tend to be attracted to darker and more twisted tales. Nevertheless, I have enjoyed some of Hill’s previous writing, and after reading a little bit about NOS4R2, I eagerly awaited its arrival.

Despite that, and perhaps inevitably, I was not really in the mood for horror when I first started to read NOS4R2. Rather than letting this ruin it for me, I decided to put it aside and got back to it recently. I’m glad I did this, too: this is a pretty solid suspense/horror novel, sure to appeal to his existing fans and also new readers (with caveats). The novel is also, frustratingly, very difficult to review – and doubly so if I want to avoid any form of spoiler.

Once again, therefore, I find myself at a loss for how to review something by Joe Hill. Seriously. I’m completely stumped. His other work that I struggle to review is his Locke & Key comic series, a story that shares some similar sensibilities and aesthetics as NOS4R2. Both are heavily character-focused, with a slow-burning plot that allows for great tension and suspense to build brilliantly. It’s not action-packed (though there is some conflict), there are a fair few surprises, and some really creepy scenes.

I must admit that I did find the start a little slower than I would normally like, and this maybe influenced my decision to put it aside for a short while. Given how long the book is (the ARC is 700 pages, or there about), I think some people may not have the patience for Hill’s pacing. When I was about a third of the way through, even I couldn’t help but think, “When are things going to kick off?” However, when I allowed myself to just sit and read (recently, life has been very disruptive and stop-start), I found myself swept up by Hill’s prose and story, drawn on through the novel. 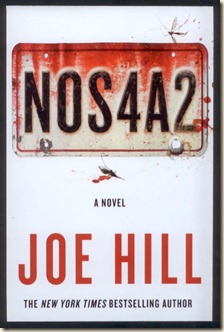 The author manages to make the mundane fascinating – the little details of these characters’ lives, their thoughts and every-day concerns… In many authors’ hands, this attention to detail would be suffocating and perhaps tedious, giving the novel a bloated feel. Not so for Hill; when added to the creepy goings-on related to Christmasland and its master, Charles Manx, he spins a fascinating, engrossing, suspenseful tale.

I found his characters all too realistic, in a way. This is, in my opinion, Hill’s greatest talent: despite writing creepy, weird, oft-supernatural stories, his characters have a vividly real feel to them. Victoria McQueen, the protagonist, feels complete, fully realised and familiar, and in some ways we grow up with her over the course of the novel: first meeting her as a child, when she first gets her special bike and stumbles across her strange ability. Then time jumps ahead to her rebellious adolescence and onwards, as her childhood brush with information of the Silver Wraith and Manx, and her confrontations with him later.

As I said at the start, I have no real idea of how to review Hill’s work. Nothing I try seems to convey the atmosphere and feel of the author’s work appropriately.

Needless to say, if you have any interest in classic, literary horror fiction, then NOS4R2 is for you. Recommended.