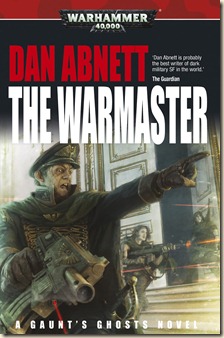 Dan Abnett’s Gaunt’s Ghosts is one of the best sci-fi series, in my opinion. Not only has it been running for so long, but it has (with but one wobble) maintained a very high quality. Each novel has built on the last, the characters develop naturally. A good number of them have died. I just love it.

Alongside the Horus Heresy and the Gotrek & Felix series, Abnett’s was one of the only Black Library series I rushed out to buy on day one (or read ASAP, if I got a review copy).

Anyway, it’s been a couple of years since Abnett’s last Ghosts-related fiction (the novel Salvation’s Reach and a short-story), so I am very much looking forward to getting reacquainted with the characters.

Here’s the synopsis for the 14th book in the series, The Warmaster…

After the success of their desperate mission to Salvation's Reach, Colonel-Commisar Gaunt and the Tanith First race to the strategically vital forge world of Urdesh, besieged by the brutal armies of Anarch Sek. However, there may be more at stake than just a planet. The Imperial forces have made an attempt to divide and conquer their enemy, but with Warmaster Macaroth himself commanding the Urdesh campaign, it is possible that the Archenemy assault has a different purpose - to decapitate the Imperial command structure with a single blow. Has the Warmaster allowed himself to become an unwitting target? And can Gaunt's Ghosts possibly defend him against the assembled killers and war machines of Chaos?

The Warmaster will be published by Black Library in December 2013.