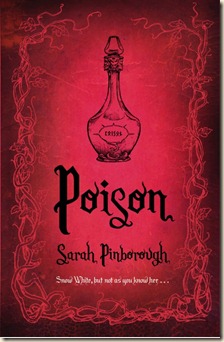 An intriguing tweaking of the classic Snow White Fairy Tale

POISON is a beautifully illustrated retelling of the Snow White story which takes all the elements of the classic fairytale that we love (the handsome prince, the jealous queen, the beautiful girl and, of course, the poisoning) and puts a modern spin on the characters, their motives and their desires. It's fun, contemporary, sexy, and perfect for fans of ONCE UPON A TIME, GRIMM, SNOW WHITE AND THE HUNTSMAN and more

This book isn’t very long, so it’s a little tricky to review at any great length without ruining the whole story. Pinborough has taken this classic story and approached it with a modern sensibility, tweaking the tale here and there to make it a little more edgy and fresh. I must admit that I’m not the greatest fan of fairy tales to begin with, which probably makes you wonder why you should care about my opinion on this book. My lack of familiarity with the source material will also have had an impact on how much I got from this novella. I can see why people will enjoy this, though. I liked it a fair bit, too.

Poison is basically a story about two young women: one an evil step-mother (Lilith) and the other a princess (Snow). They are the same age, more or less, with the King having decided on a younger model after the death of Snow’s mother. They are also, of course, very different. Snow is carefree, confident, and quite fun (she can often be found drinking and hanging out with the dwarfs, pulling practical jokes), and she’s a bit of a tomboy. Lilith, on the other hand, is cold, calculating, self-conscious, surprisingly insecure, and highly resentful of the male-dominated world in which she lives (understandably – she seems to be better suited to ruling than her warmonger, imperialist husband). She yearns for power and the ability to wield it, and takes her husband’s latest campaign abroad as an opportunity to wield it in his name.

Pinborough’s characters are interesting – they are clearly identifiable as those in the original, but updated and a little more modern. At times, the dialogue and writing felt a little archaic, which was at odds with the contemporary feel I think the author was going for. Nevertheless, they’re all pretty interesting. Lilith controls a psycho-Aladdin, for example! That was a very cool development, I thought. That’s also all I’m going to say about it, lest I ruin that darkly delightful character for you. Lilith’s grandmother, the old crone of the story, is as wicked and devious as the Queen. She’s also a bit dotty, which added some extra levity (she mothers Lilith a bit, and her first scene made me chuckle). The Huntsman seems to be the typical manly-man of fairy tales (who seems to have some magical stud-powers…).

Despite not being the biggest fan of fairy tales, I thought this was a pretty interesting, quick read. I didn’t love it, unfortunately, and there were a couple of fleeting lulls in the narrative, but it was still a good read. If you’re looking for a new, fresh and modern take on this classic fairy tale, and enjoy the swathe of fairy-tale-related reinterpretations (Grimm and Once Upon a Time in particular, I think), then Sarah Pinborough’s Poison will be right for you.

A quick, fun, diversion; an intriguing contemporary take on one of the all-time classic stories. I’m looking forward to seeing what the author’s done with Beauty and Charm, the other two novellas in the ‘series’ (also published this year by Gollancz).

Posted by Civilian Reader at 2:11 PM