I haven’t been very good at keeping up on upcoming releases of late. At least, I haven’t been as investigative about it, waiting instead for information to filter its way to me. (Bit lazy, but there we go.) Anyway, I first saw the cover for T.L. Costa’s upcoming novel in a press release from Strange Chemistry, and it’s really stuck in my mind ever since. It’s a pair of powerful images in a simple composition, that really grabs the attention… 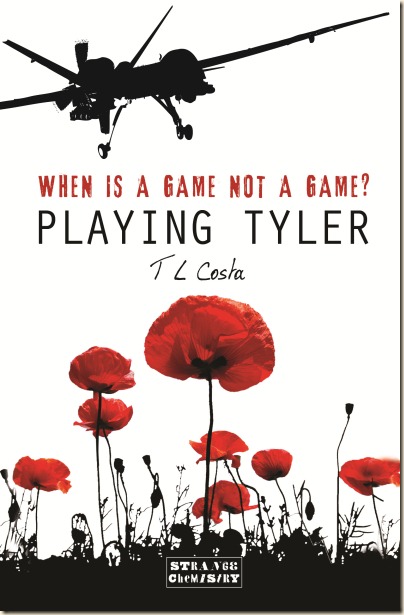 I just really like that. Will I like the novel? Not a clue. But, I will be giving it a try pretty soon (I was lucky enough to get an eARC). Strange Chemistry has managed to hire some pretty great artists of late. Here’s hoping they keep up this string of strong cover images. (It’ll make all of our shelves look nicer…)

When is a game not a game?

Tyler MacCandless can’t focus, even when he takes his medication. He can’t focus on school, on his future, on a book, on much of anything other than taking care of his older brother, Brandon, who’s in rehab for heroin abuse… again.

Tyler’s dad is dead and his mom has mentally checked out. The only person he can really count on is his Civilian Air Patrol Mentor, Rick. The one thing in life it seems he doesn’t suck at is playing video games and, well, that’s probably not going to get him into college.

Just when it seems like his future is on a collision course with a life sentence at McDonald’s, Rick asks him to test a video game. If his score’s high enough, it could earn him a place in flight school and win him the future he was certain that he could never have. And when he falls in love with the game’s designer, the legendary gamer Ani, Tyler thinks his life might finally be turning around.

That is, until Brandon goes MIA from rehab and Tyler and Ani discover that the game is more than it seems. Now Tyler will have to figure out what’s really going on in time to save his brother… and prevent his own future from going down in flames.

Playing Tyler will be published by Strange Chemistry in the UK, US and as an eBook at the beginning of July 2013. For more, be sure to check out Costa’s Facebook page and follow her on Twitter.

Posted by Civilian Reader at 8:16 PM