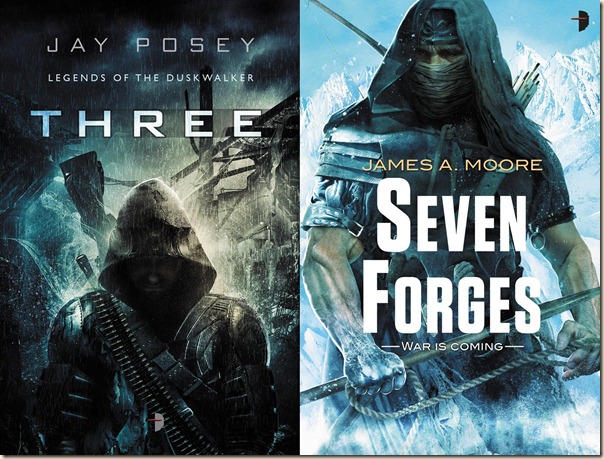 Ok, keeping with the Angry Robot theme, here are two more covers for upcoming books, both of which share a feature with each other and so many other fantasy and sci-fi books of late: the Hooded Man on the cover. Personally, I find the conformity rather amusing, and some of the covers are pretty great. These two are two of the better examples of Hooded Men Covers. Here are the synopses and details for the novels…

Jay Posey’s THREE, book one in the Legends of the Duskwalker, published in August 2013 (cover by Steven Meyer-Rassow):

The world has collapsed, and there are no heroes any more.

But when a lone gunman reluctantly accepts the mantle of protector to a young boy and his dying mother against the forces that pursue them, a hero may yet arise.

File Under: Science Fiction [ Three For All | Apocalyptic Wasteland | A Journey Home | Fear the Weir ]

The people of Fellein have lived with legends for many centuries. To their far north, the Blasted Lands, a legacy of an ancient time of cataclysm, are vast, desolate and impassable, but that doesn’t stop the occasional expedition into their fringes in search of any trace of the ancients who once lived there… and oft-rumoured riches.

Captain Merros Dulver is the first in many lifetimes to find a path beyond the great mountains known as the Seven Forges and encounter, at last, the half‐forgotten race who live there. And it would appear that they were expecting him.

As he returns home, bringing an entourage of the strangers with him, he starts to wonder whether his discovery has been such a good thing. For the gods of this lost race are the gods of war, and their memories of that far-off cataclysm have not faded.

A brighter cover, less brooding. There’s something about it that reminds me of the cover for Gail Z. Martin’s Ice Forged. Maybe it’s just a connection made by the cold climate and snowy mountains in the background portrayed… Colucci also did the cover for The Red Knight by Miles Cameron (Orbit US).