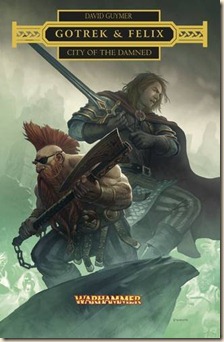 I’ve been reading the Felix & Gotrek series ever since the very early Games Workshop Warhammer anthologies (the first I bought was Wolf Riders). When Black Library was formed, and William King started releasing regular novels, I was very happy. Then Nathan Long took over the series, and he maintained the quality very well, taking it to the next level. Now the series seems to be more of a team-effort, with multiple short stories by different authors, and now novels by different people – this latest one by David Guymer, and also Josh Reynold’s Road of Skulls (which I really need to read… Maybe I’ll read it this coming week).

It’ll be interesting to see how these new installments add to the expanding Gotrek & Felix canon. Especially as they seem to be diverging from the timeline set out by King and Long…

Gotrek and Felix: unsung heroes of the Empire, or nothing more than common thieves and murderers? The truth perhaps lies somewhere in between, and depends entirely upon whom you ask... Legend tells of the City of the Damned - a dark and forbidding place destroyed in a previous age by the wrath of Sigmar. Long have its fallen towers remained undisturbed by the people of Ostermark, but now an ancient evil stirs in the depths, gathering its strength once more. Gotrek and Felix are swept up in the crusade of Baron Gotz von Kiel to cleanse the city, and as the ruins are torn from the passage of time itself, the Slayer’s doom appears to be approaching more quickly than either of them would like.

City of the Damned will be published in September 2013.