I just caught this over on BookSworn, and thought I’d share it on here as well. I’ve only read the first novel in Williams’ series, The Emperor’s Knife, and do intend to get to the second, Knife Sworn, as soon as time permits. 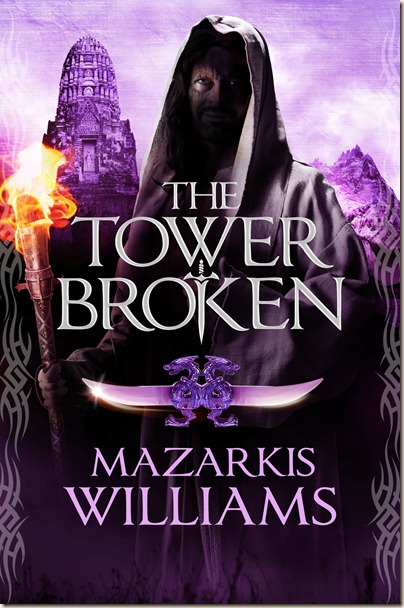 Is it just me, or does the fellow on the cover have a bit of a cheeky smile on his face…?

The only synopsis I could find of the novel was this single-sentence from Rising Shadow:

“Cerana faces down its historical enemy while a greater threat creeps through the desert towards the capitol city of Nooria.”

And over at the above-linked BookSworn page, Mazarkis Williams had this to say about the plot:

“Govnan gets a point of view in this final book, and the Tower is the focus of the story. When faced with the prospect of its utter ruin and the destruction of Nooria, Govnan must make some tough choices.”

I’ll keep my eyes open for a proper synopsis, and update this post as-and-when something more concrete becomes available.

UPDATE! [May 10] Here is the publisher’s synopsis for the book:

Nooria is at breaking point. The nothing bleeds out the very essence of all, of stone, silk – and souls. Sarmin thought he had stopped it, but it is spreading towards Cerana – and he is powerless to halt the destruction.

Even as Cerana fills with refugees, the Yrkmen armies arrive, offering to spare Sarmin’s people if they will convert to the Mogyrk faith.

Time is running out for Sarmin and Mesema: the Mage’s Tower is cracked; the last mage, sent to find a mysterious pattern-worker in the desert, has vanished; and Sarmin believes his kidnapped brother Daveed still has a part to play.

The walls are crumbling around them...

The Tower Broken will be available in “Late 2013”, published by Jo Fletcher books in the UK on November 7th 2013. (US details still pending confirmation.)