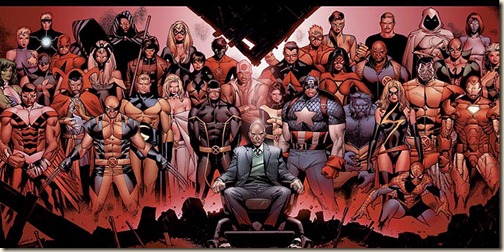 Another dual-review, this time for two Marvel Events. I’m always wary of Marvel Events – they have a tendency to disappoint or prove a little pointless for those who are not devouring most/all of Marvel’s ever-expanding line of titles. The end of Avengers vs. X-Men at least had the benefit of shrinking their overall line, at least. It doesn’t appear that any of the big events that came before did. (I’d still like to read Siege, I think…)

Both of these two titles were included in a Marvel sale on ComiXology (which is pretty much the only way I buy Marvel titles, now, actually), so buying them and catching up with this Marvel backstory didn’t prove too costly. One of the titles was very good (much better than expected, certainly), and one just mediocre (and just a little bit of a struggle to keep reading)… 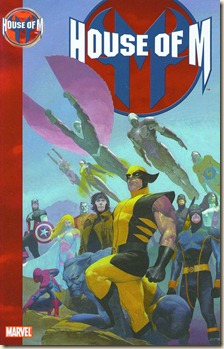 The Avengers and the X-Men are faced with a common foe that becomes their greatest threat: Wanda Maximoff! The Scarlet Witch is out of control, and the fate of the entire world is in her hands. Will Magneto help his daughter or use her powers to his own benefit? Starring the Astonishing X-Men and the New Avengers! You know how sometimes you hear the phrase: and nothing will ever be the same again? Well, this time believe it, buster! Nothing will ever be the same again!

The book starts with Wanda Maximoff, also known as “The Scarlet Witch”, in a happy setting. Sadly, as Professor Xavier wheels in, we learn that it is not real – rather, a manifestation of Wanda’s power to bend and alter reality at will. What makes her power so deadly, though, is her mental instability. She’s clearly been spiraling into a much worse state, which forces the Avengers and X-Men to meet to discuss what is to be done about her. Some call for her termination, others call for restraint and understanding. A compromise is reached: they will go to the devastated land of Genosha to assess her state of mind, despite neither Prof X nor Dr. Strange able to help her retain (or, perhaps more accurately, attain) a grip on reality. 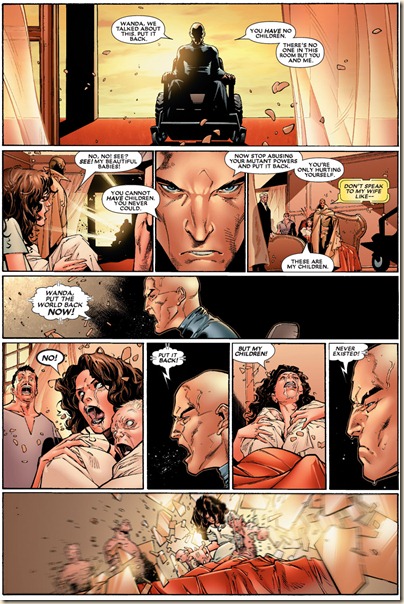 At the end of the first issue, Spidey walks off and wakes up... Only, nothing he sees is the same as it was… For one thing, there are a lot more apparent-mutants, too: they’re pretty much everywhere. They seem to be as numerous as humans, if not more so (later, it becomes clearer).

There are a number of funny moments in the book, too – not laugh-out-loud funny, but at least enough to make me chuckle. Here, for example, is Kitty Pryde, teaching a history class: “Who was the first mutant?” she asks her class. “And don’t say Moses or Jesus. I’m talking officially.”

Over the course the series, we are taken through this new reality for all the key players (too many to go through individually in a review, though). It’s pretty good, actually, and Bendis has chosen very well for most of the characters.

The spanner is thrown into the works, though, after Wolverine wakes up and knows something ain’t right... As Wolverine remembers his entire life in the “real” Marvel reality/timeline, he starts to seriously freak out. In a stroke of bonkers logic, he decides to launch himself off the Avengers’ Helicarrier... He flees from his former team-mates on the “Red Guard” (an elite S.H.I.E.L.D. unit), and gets scooped up and taken in front of the Human Resistance. And so begins his recruitment drive, collecting mutants and others to his side, as he realizes what Wanda’s done: given mutants what they always wanted, acceptance and a place in the world. The chapters have a brief prose intro that is rather info-dumpy (I read this as individual issues, so I’m not sure if this is the case in the collected book). This is also probably because there were a lot of tie-in issues across Marvel’s titles at the time, all of which fed into and effected what happened in this book. I wasn’t prepared to buy and read them all, though (even with comiXology’s 99c sale).

In the sixth issue, we get this statement from Cyclops:

“I’ve – uh – I’ve been team leader of the X-Men since I was a teenager... And in that entire time, I’ve prided myself on my tactical restraint. Taking a moral high ground where violence is concerned.”

This from the mutant who will bring the world and community of mutants and super-heroes into a war so costly and devastating, that it will forever mess up the Marvel universe. What difference a couple of years make, huh?

At the end, we learn of what really happened, wrapping things up rather nicely. But then Wanda says those now-immortal words that forever changed the Marvel Universe… 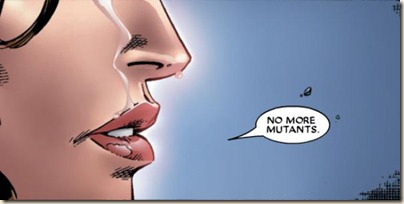 After the pleasantly strong start, the book maintained its quality and pace. The artwork is also excellent throughout. Although, in an unusual twist: while the women are the comic-book ideal, it is the men who look deformed, as if their all suffering some steroidal gigantism. Sometimes, in the less-sharp or more-busy panels, it looks really wrong… On the whole, though, it was quite well realised on the page. Some of the pages were a touch too busy, which could make them unclear, and a handful of panels were sadly indecipherable. This didn’t have much of a negative impact on the book, however, as Bendis’s writing was strong and quite gripping.

This book was, therefore, much better than I had expected. I’m always wary of the Marvel Events, but this was well-written and fun. I would certainly recommend this to fans of any/all Marvel titles. 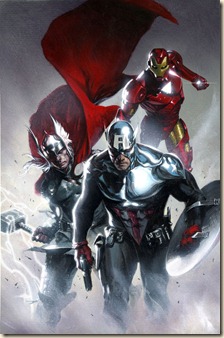 SECRET INVASION IS HERE The shape-shifting alien race known as the Skrulls has secretly infiltrated every super-powered organization on Earth with one goal – full-scale invasion In this collected edition, page-after-page unveils reveal-after-reveal and shocking moment-after-shocking-moment Brian Bendis and Leinil Francis Yu leap off the pages of mega-hit New Avengers and deliver a story that will change the Marvel Universe forever.

This ‘Event’ collection was a bit of a disappointment. I read it after House of M, and only because I rather enjoyed that book. Something about the rapid-fire dialogue made me wonder if Bendis had been watching a lot of The West Wing in the run-up to writing this. Sadly, though, the dialogue in here has nothing on Sorkin’s style, and instead just felt choppy and rushed.

The story in general felt simplistic, overloaded with telling-rather-than showing (which has been a frequent complaint of mine lately, I know). The book then becomes a riotous mess. I had a vague inkling of who the Skrull were, but had difficulty following what was going on and, as a result, never really came to care.

I would not recommend this to people who haven’t been following the overall, web-like Marvel chronology and story. There are a lot of hints and allusions to what has come before, but without knowing much of the back-story, I imagine I missed a lot. I include myself in that group. I was lost and, despite Yu’s excellent artwork, ultimately bored.