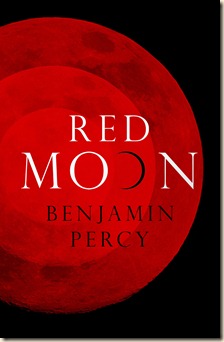 Every teenage girl thinks she’s different. When government agents kick down Claire Forrester’s front door and murder her parents, Claire realises just how different she is.

Patrick Gamble was nothing special until the day he got on a plane and, hours later, stepped off it, the only passenger left alive. A hero.

President Chase Williams has sworn to eradicate the menace. Unknown to the electorate, however, he is becoming the very thing he has sworn to destroy.

Each of them is caught up in a war that so far has been controlled with laws and violence and drugs. But an uprising is about to leave them damaged, lost, and tied to one another for ever.

The night of the red moon is coming, when an unrecognizable world will emerge, and the battle for humanity will begin.

Red Moon is one of the best novels I’ve read this year. It’s long, but never felt like it dragged. I savoured every chapter. A near-perfect literary horror novel.

There’s so much to this novel, too: it’s part coming-of-age, part tale of prejudice and segregation (mirroring some of the Civil Rights movement, more recent prejudice against Muslims, and then creates another violent thread of anti-lycan prejudice). It’s also partly a love story (new love and old), and a story of redemption. All of this is overlaid with politics, secrets, and certain characters’ pasts catching up with them. The third part of the book feels more dystopian, too (won’t spoil why or how…). It’s a story about family, too, and how even those of us who might grow up with none of our own, or lose our loved ones, can create a new family.

The events move pretty fast, but the story is epic in scope, so the characters’ situations are forever changing and developing. It makes it a little tricky to delve too deeply into the plot or story, without ruining any number of twists and turns Percy takes us through. The author has great narrative discipline, never deviating for too long from the main thrust of the novel, unveiling revelations and important information in a steady, natural way. There is a dark humour running through the story, too, which was certainly welcome and prevented the novel from becoming too dour. The allegory and allusion is great, though some people might find it a but blunt and unsubtle at times. Nevertheless, I think Percy’s done a great job of taking real-world issues of persecution and alienation, and blending them with character-focused anxieties and personal struggles.

The novel is character-driven, so we don’t often get the perspective pulling back for a wider, macro-view; but Percy still manages to keep us up-to-date and well-informed on the subtle historical differences, the lycan history, the societal changes and differences, and so forth.

The novel features werewolves, as a substitute for every persecuted group in America (with added teeth and sometimes violent tendencies, of course). In many ways, though, the real horror in the novel comes from what people are willing to do to each other, and especially those who are considered different (in both big and small ways). For example, what the “patriotic” anti-Lycan group “The Americans” do, fulfilling the role of this reality’s white supremacist skinhead-analog. In these situations and environments, as one character states, it’s not just people who die, but also our humanity.

Percy’s prose style is immersive and engrossing, filled with great turns of phrase, sometimes portraying the mundane in almost poetic or lyrical ways. It never felt over-written, which was a nice surprise from such a long novel. From the start, I was hooked and drawn into the narrative, always eager to get back to it when real life would intrude on my reading-time. His characters are realistic, engaging, each reacting and developing in realistic ways to the sometimes brutal, soul-destroying, fantastical situations and people they encounter.

With a superb ending that is neither a disappointment, nor a Bruckheimer/Bay action extravaganza (in fact, it’s almost understated), I found this to be an absolutely satisfying read. Red Moon is an engrossing, nuanced novel, and I highly recommend it.

Red Moon is published by Hodder in the UK and Grand Central Publishing in the US.