What started out as a rather distressing page in DC’s New 52 I, Vampire grew into something rather amusing. [Warning, there are some spoilers for the series, so don’t read ahead if you don’t want anything ruined…]

First, Andrew Bennett (who at this point is a badass, evil-as-hell uber-vampire) had a snack…

Luckily, we learn later that the dog has been turned! (Vampire dogs – something I’ve been seeing a bit more, lately… Amusing memories of Blade: Trinity: the cross-bred vampire Pomeranian. Heh.) Good ol’ Mishkin gives the good guys a hand. 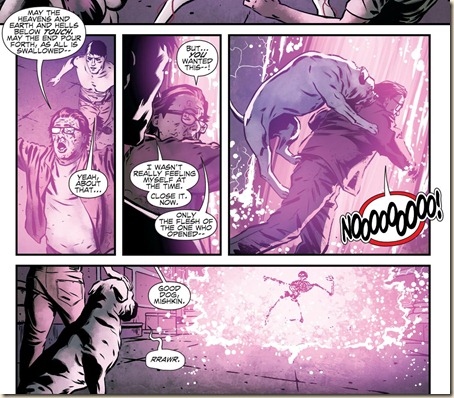 Of course, in true apocalyptic-horror-fun, Bennett is no longer a bad-guy, and is fighting for the light side again.

I, Vampire ended with issue #19, sadly. It was written by Joshua Fialkov, with art by Andrea Sorrentino and Fernando Blanco. I think it was a pretty good comic: the artwork was perfectly suited to the horror and atmospheric storylines, and Fialkov’s writing was top-notch. I’ve read all 19 issues, and none of them were bad. There were moments that were a little cheesy, but I get the feeling Fialkov was aiming for Buffy-esque humour (especially towards the end).