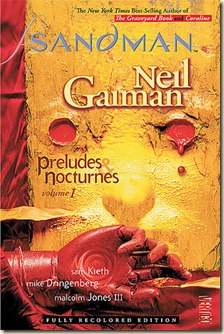 The Start of the Classic, Hugely Popular Comic Series

An occultist attempting to capture Death to bargain for eternal life traps her younger brother Dream instead. After his 70 year imprisonment and eventual escape, Dream, also known as Morpheus, goes on a quest for his lost objects of power. On his arduous journey Morpheus encounters Lucifer, John Constantine, and an all-powerful madman.

This book also includes the story “The Sound of Her Wings” which introduces us to the pragmatic and perky goth girl, Death.

This book starts with a great, century-spanning first chapter/issue, as Morpheus is summoned, trapped, and held captive for generations. The atmosphere and writing is superb, and it’s not difficult to see why this series grabbed so much attention when it first started. I was absolutely sucked into Gaiman’s story.

The first storyline is, effectively, a quest tale. After the first chapter, Morpheus is freed (that’s not really a spoiler), and sets out to reclaim three precious, powerful items that were taken from him. These are the items that make him who he is, allow him to perform the role of the Sandman. Gaiman has, however, populated his story with so many weird-and-wonderful creations and characters from mythology, literature and fable. At first, he must relocate his pouch of sand (in this chapter he meets Constantine – a very dark story towards its end, and very cool); then his helm (which requires a trip to a very twisted Hell to see Lucifer), and finally his ruby amulet (a really twisted story about a serial-killer with mind-control powers). 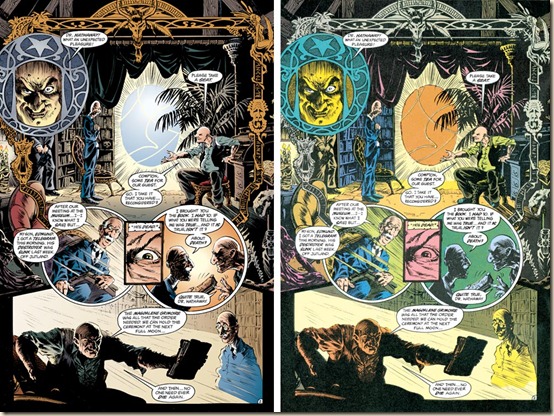 The series was re-coloured, recently.
Here are two examples of the re-done pages (above and below): new on the left. 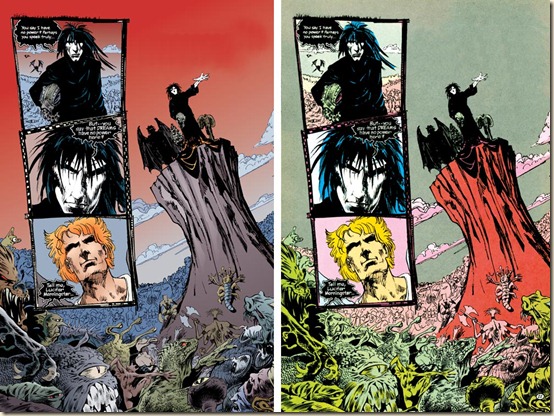 I was surprised to see some other DC characters appearing: John Constantine, Etrigan (that most garish of DC demons), and some members of the Justice League. I had always been under the impression that Sandman was a wholly original title and character, taking place in a new setting. The book and story don’t suffer for these cameos, though. I was just surprised. Maybe I should have investigated it a little more beforehand…? 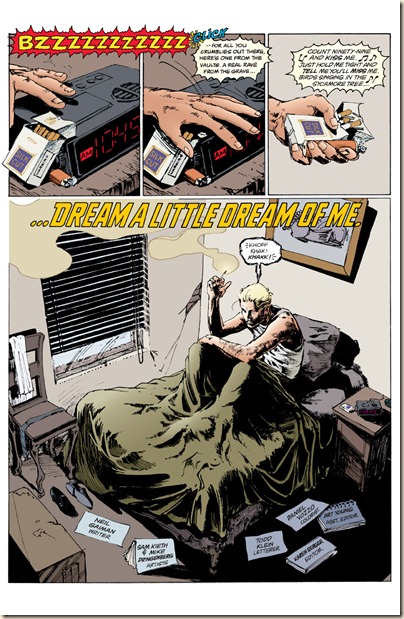 The story is, as I’ve mentioned, quite superb to begin with, and I found myself almost immediately hooked. “One more chapter” became three, and then all eight. I lingered over so many pages and panels, and got completely sucked in. Things change mid-way through, a bit, and got much weirder. Not bad-weird, just… weird. (Minus one for Eloquence…) The artwork also shifts to something often less clear and inconsistent. There's a rawness to it, though, that I can certainly see appealing to many people. Would I have preferred something a bit more conventional? Certainly, but it can’t be denied that the artwork packs a good amount of punch as well. 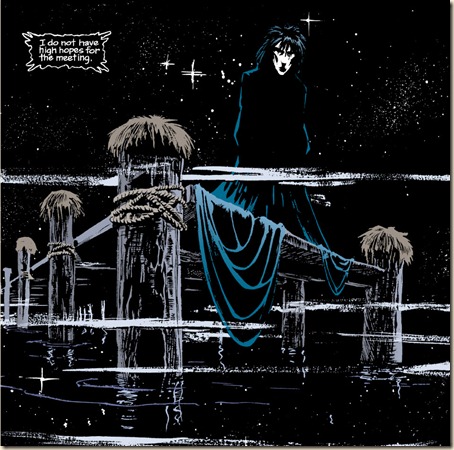 The Sandman prepares to go to Hell… [#4]

Not bad, but not as amazing as I had expected. This shouldn’t be a surprise, though, given just how popular this series has become. I really like Death (quite looking forward to getting around to reading her mini-series). Despite the couple of minor niggles, I’m really interested in reading the rest of the series, as well as its various spin-offs.

A classic of the genre and medium, this is certainly recommended. 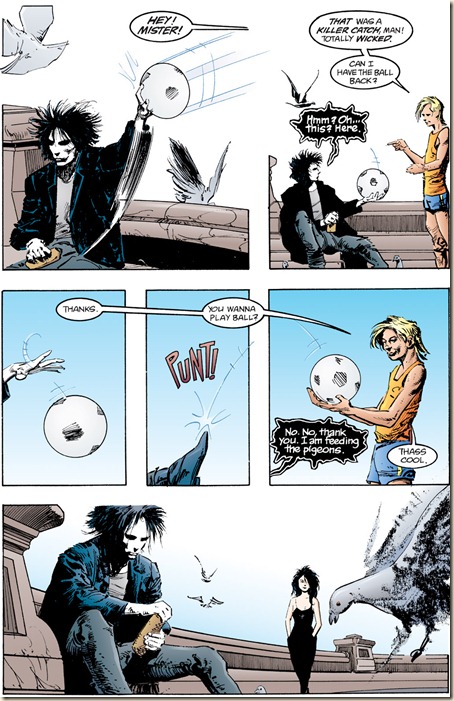