Upcoming: “The Cambodian Book of the Dead” by Tom Vater (Exhibit A)

Exhibit A, the crime/thriller imprint under the Angry Robot banner, is still relative new (only three titles published so far, I believe). They seem to have a pretty good eye for stories, though. I haven’t had a chance to read any of the new novels, but I think that lapse is going to change, and soon. Today, I nabbed an eARC for Tom Vater’s intriguing-looking novel, The Cambodian Book of the Dead, which has the pitch, “where Apocalypse Now meets The Beach”… 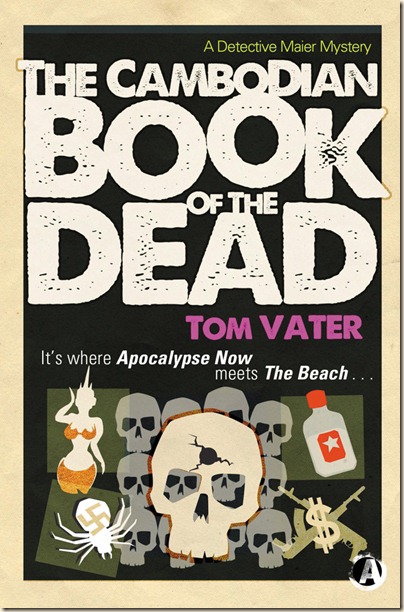 Was I swayed by the cover? Well… yes, I admit I was a little bit. It certainly helped grab my attention. Then I read the synopsis, and my interest was well-and-truly piqued. I been meaning to read more thrillers, too… Here’s the synopsis:

Private eye and former war reporter, Maier is sent to Cambodia to track down the missing heir to a Hamburg coffee empire.

His search leads him into the darkest corners of the country’s history, through the Killing Fields of the communist revolution, to the White Spider, a Nazi war criminal who reigns over an ancient Khmer temple deep in the jungle.

But the terrifying tale of mass murder that Maier uncovers is far from over. And soon Maier realises that, if he is to prevent more innocent lives from being destroyed, he will have to write the last horrific chapter himself.

The Cambodian Book of the Dead will be published by Exhibit A at the end of June (North America & eBook) and the beginning of July (UK).