On the Road Reading (& News) 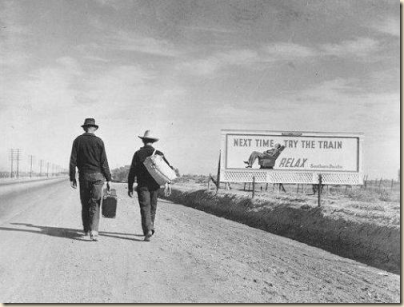 As I have mentioned before on the blog, from the middle of September until the beginning of January I am basically going to be homeless (I will still have a UK address, though), and therefore travelling an awful lot – as luck would have it, I’ll be in LA, New York and Peru. By no means does this mean Civilian-Reader is going to suffer (at least, not much; depending on internet connection, etc.). I’m still going to be reading plenty, reviewing plenty, and trying to get interviews, guest posts and other content up on the site.

Over the next couple of weeks, I’ll be reading some newly-acquired hardbacks – because then I don’t have to carry them around with me for four months, or on the plane(s). So, there will be two Star Wars reviews and one Dan Abnett review over these two weeks, followed by a lot more variation. Given that I’ve managed to get a bit ahead of things (with some content ‘banked’, scheduled to go live over the next two weeks), I may still be able to mix things up a bit more. We’ll just have to see how things go.

Anyway, on to the next few months. I’m hoping to spend the coming four months keeping up with new releases (especially those listed in the “2011 Releases” page), but also catch up on some already-available novels. I’ve been saving up books on my Kindle for my travels, and I thought I’d share a preview of what is to come in terms of reviews. There will be a greater mix of genres, too – because I’ve been spending my days reading and writing about US politics, I’ve tended to prefer fantasy and sci-fi over thrillers, which used to be my preferred genre overall. Now, however, because I’ve mostly finished with my PhD revisions, I’ll be reading a few more thrillers, as well as plenty of fantasy and a sprinkling of Sci-Fi.

So, in no particular order and by no means a complete list, here’s some of the novels that will be featured on the blog:

So. I have all of Sanderson’s own novels as Kindling, but have never read a single one. This seems frankly silly, so I’m going to read at least one of these – I’m just not sure which order to read them in. I’m leaning towards the Mistborn trilogy, so I can get into The Alloy of Law soon if I love them. Part of the reason for buying them for the Kindle was that they’ve all been wonderfully priced (big thank you to publisher for that), but also… well, they’re huge, and that’s what I mainly use my Kindle for – Big Ass Books.

Any thoughts on which I should read first? 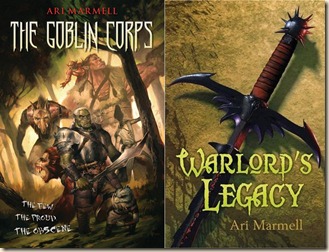 I’ve read The Conqueror’s Shadow, which was thoroughly enjoyable, so I’ve been eager to carve out time to read and review Marmell’s other two latest novels. They’re both apparently quite different from each other, too. Again, not sure in which order I’ll read them, but I will most likely read at least one of them in September.

I’ve also interviewed Ari Marmell for the site (he was our second interview, in fact). 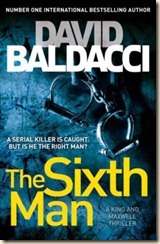 As it turns out, I’ve reviewed more of Baldacci’s novels on Civilian-Reader than any other single author (I’m not counting anthologies or co-written books). His thrillers are always entertaining, engaging, intelligent and quite weighty. There hasn’t been a bad one yet, although I do certainly prefer the Camel Club novels, with the King & Maxwell series coming a close second. This one is the latest in the latter series, and I’m looking forward to diving into it. 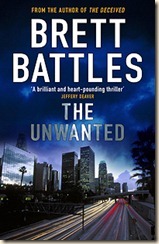 A much underrated thriller author, in my opinion. This might have something to do with the fact that you don’t see his books much in the UK – at least, not in the stores I normally frequent. This is a shame, as he’s really very good and his first series (the Jonathan Quinn series) is very good. He’s recently started a couple of new series, which may only be available in the UK through Amazon’s Kindle store (I think they’re more widely available in the US). The Unwanted is the third novel in his Quinn series (after The Cleaner and The Deceived), and I’m looking forward to getting to this one. 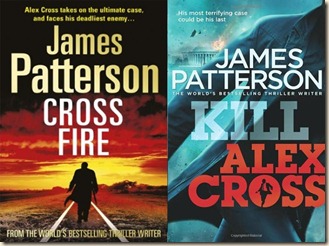 Ah, Mr Patterson… It was actually his Alex Cross series that got me addicted to thrillers – the first one I read was Violets Are Blue (when I lived in Japan, of all places), and because of how much I liked it, I quickly read all of his novels that were available at that time. Once he started collaborating with a gazillion other authors, however, I started to lose interest. Occasionally, the co-written books were ok, but there was an obvious drop in quality. I really hope these latest two novels aren’t a disappointment – especially Kill Alex Cross, which has a pretty cool-sounding premise.

If I’m honest, the Alex Cross series hasn’t been particularly great since Four Blind Mice, although they’ve still stood out as the best novels out of his prodigious output each year. (My new favourite thriller writer has to be John Sandford, whose Lucas Davenport and Kidd thriller series are awesome; I’ve only read the first of his latest series, featuring Virgil Flowers, so it’s too early to pass judgement on that.) The last Cross novel I read, I, Alex Cross was disappointing, especially after Cross Country had taken the eponymous hero to Africa in one of the more interesting recent instalments. Now that the earlier Cross books have been released for Kindle, I may go back and read some of them again. 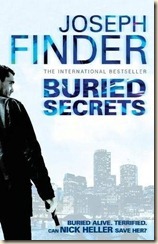 Another great thriller author, whose book I’ve been neglecting for too long. I really liked the first novel in the Nick Heller series, The Vanished, and also Finder’s Power Play, which I remember picking up on a whim in a 3-for-2 deal, I think. Finder is a great author, so I have high expectations for this novel.

(He actually sent me an email about a feature I wrote a couple of years back, about liberal-vs-conservatives in the battle for the heart of thriller genre – I was responding to an article in The New Republic that had annoyed me a little bit, because the journalist seemed to fail to understand the point of the thriller genre.) 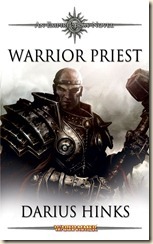 Warrior Priest was this year’s Gemmell Morningstar Award winner, by one of my new favourite Black Library authors (see my reviews of Sigvald and Razumov’s Tomb), this was a novel that I kept “saving for later” – I have a strange habit of doing this with both novels and long features in the various magazines I read and subscribe to. Anyway, I’ve heard and read some very good things about this novel, so I really must get on with reading it.

Now, I have it loaded onto my Kindle, and there will be no excuse not to catch up. 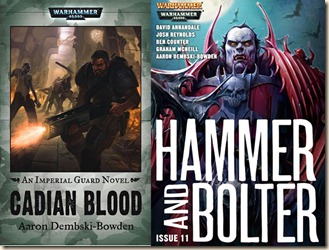 Aaron D-B is probably my favourite author among the Black Library stable (Soul Hunter, Blood Reaver and The First Heretic are frankly brilliant), and this was his first novel for them, which I totally missed: I used to only read the Horus Heresy, Gaunt’s Ghosts and Gotrek & Felix series, until Black Library kindly added me to their review lists. Since then, I’ve been reading much wider from their lists and I’m ever-more impressed by the quality of the writing and stories. Perhaps one of the most-improved imprints over the last few years. Cadian Blood was released as an eBook a little while ago, after going out of print, so I’m very happy that I get the chance to read it.

Shadow Knight is a short story Aaron wrote for Issue 11 of Black Library’s monthly e-zine, Hammer & Bolter, and features the Night Lord traitor marines from Soul Hunter and Blood Reaver. In fact, it’s a prequel to Soul Hunter, so I’m rather eager to read it. 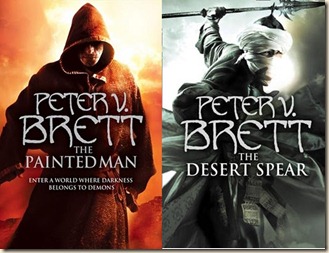 This is a fantasy series I have long neglected, and I have no clue why. It seems to get great reviews across the board (especially The Painted Man), so I really should get in gear and read them. So I shall. Probably quite soon, too. There’s a Kindle edition of two short stories set in the world, too, so I’ll try to read that, too.

I recently became addicted to the TV series based on Gerritsen’s novels, Rizzoli & Isles, and while watching I had no clue it was based on a series of novels! (Despite the fact that the opening credits include “Based on the novels by Tess Gerritsen”…) Thanks to Mieneke for pointing this out to me! So, because I liked the show, and also the idea of Boston as a location for a crime series, I went ahead and got the first novel to try.

Jack Kerouac, On The Road (Penguin)

This was a gift from Alyssa, and has a strange (and very nerdy reason) behind it: Xander on Buffy the Vampire Slayer reads it after they graduate from high school, instead of making his grand cross-continental road trip. I mentioned that I knew a fair few of the references, but had never read it, so Alyssa got it for me for my birthday.

I will be reading it when I, too, am on the road.

So, by no means an exhaustive list of what I’ll be reading, but a good idea of some of the stuff that will appear on the blog. There will be a few non-fiction books read and reviewed, as well as other new fiction titles, and US releases that aren’t available in the UK just yet – such as Howard Andrew Jones. There’s a high possibility that I will finally get around to reading both Joe Abercrombie and James Barclay, too.

Speaking of US novels: who else should I try, who isn’t readily available in the UK? I’m very keen to keep expanding what I read and try, so feel free to leave suggestions in the comments, below.

I also hope to keep up with posting interviews and guest posts over the months I’m travelling, but I can’t guarantee that they’ll be posted as frequently and consistently as they have been over the last few months. I will, of course do my best to keep them going as like clockwork as possible.