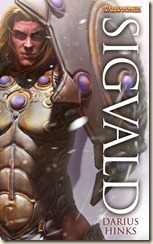 The Decadent Host marches forth

Obsessed with the Brass Skull, the object of his misguided yearnings, Sigvald is unaware his enemies are closing in around him. In a hellish quest that drives him across the twisted landscape of the Chaos Wastes and culminates in an epic confrontation, he realises that the lures of Slaanesh can never be sated.

The second of the Chaos heroes to be featured as part of Black Library’s Warhammer Heroes line of novels, Hinks has written a fast-paced, twisted tale of avarice, hubris and betrayal. It’s good stuff, and I blitzed through it very quickly.

I’ve always been drawn to the less virtuous heroes and characters in Black Library’s series: they’re just more interesting. After reading and thoroughly enjoying Hinks’s novella (Razumov’s Tomb), I was very eager to get stuck in to Sigvald, and I am happy to report that I was not at all disappointed.

The story has two main threads – one follows Sigvald’s Decadent Host, and the newcomer Baron Gustav Schüler, who is quickly assimilated into Sigvald’s coterie, despite his initial hesitation. The second thread follows a cursed tribe of Norsemen, who set out to discover the cause of their curse and end their suffering. The Fallen’s curse is linked with Sigvald’s life, and it is only a matter of time before the two forces clash. In the meantime, Sigvald has an ill-advised quest of his own to fulfil, one his ever-faithful chancellor Oddrún fears will send him further down the path of damnation.

Hinks has quite the gift for description and characterisation, and the Chaos Wastes and its denizens offer plenty of opportunity to utilise this gift. Characters are well formed, but Hinks takes his time introducing us to them, their lives and their environment – offering ever-more detail as the novel progresses. It’s done skillfully, so one doesn’t become impatient or lost, and is a sure way to keep us reading. Sigvald’s history, which arrives quite late in the novel, almost made him a sympathetic character, before cementing his selfish nature perfectly with a single choice.

When we first meet Sigvald, I was reminded of Anne Rice’s description of the vampire Armand – they’re not identical, but the way Hinks wrote it evoked Rice’s own gift for description and also a similar horrific-yet-beguiling aesthetic of her vampires. Sigvald is utterly self-involved. He also, at times, evinces an enthusiasm for life, pleasure and beauty that is reminiscent of an inquisitive puppy. Unquestionably vain (constantly, absentmindedly distracted by any perceived flaw in his appearance or physicality), he is the epitome of a follower of Slaanesh, the pleasure god. He is an aesthete. Hinks has described Sigvald perfectly, as “the doomed, beautiful, terrifying Caligula of the Warhammer world”, so enamoured by himself that his kingdom is crumbling about him and he just doesn’t care (or possibly simply doesn’t notice). There’s less ambiguity about Sigvald’s motivations than there was in the eponymous protagonist in the previous Chaotic Warhammer Heroes novel, Wulfrik. Sigvald is completely selfish, and leads me to wonder if perhaps there should be a second book series, Warhammer Villains.

There’s a madness that defines most of the characters in the novel, making some scenes slightly strange or otherworldly, but always interesting. Some are at once mighty warriors and also weak slaves to their debauched proclivities and desires, so indulged have they been for centuries (for example, the captain of the Decadent Host, Víga-Barói). Sigvald in particular, but also Baron Schüler, whose attempts to resist the pull of Sigvald’s court evaporate as he develops a new obsession with Sigvald’s wife, Freydís, which leads him to attempt a daring and bold treachery against his new benefactor, setting in motion the events that bring together three armies in an almighty bloodbath in the second half of the novel.

Oddrún is the yang to Sigvald’s yin – the chancellor is physically mutated and hideous, yet morally conflicted and almost pure, concerned about the lengths and heights of Sigvald’s depravity and his immortal soul. Locked in the futile role of trying to bring Sigvald back from the brink, to attempt even a modicum of repentance, he must constantly struggle with the oath he swore to Sigvald. Oddrún is probably my favourite character in the novel, more complex than most of the others. Although, I also have a fondness for the fish-faced mini-wizard, Énka, who was kind of amusing and almost cute in his weirdness.

Despite the flexibility and descriptive opportunities offered by Warhammer Chaos, Hinks has done a good job of not going too over-the-top, as Chaos novels and characters are sometimes prone to do. The novel starts with a more thoughtful, nuanced (though no less alien, deviant or horrific) portrayal of the followers of Chaos, but as the novel progresses, battle between various sides is joined, and Sigvald’s own journey becomes more dangerous and potentially rewarding, the more fantastical and flexible nature of Chaos and its possibilities comes to the fore. Hinks offers a kaleidoscope of horrors that are fascinating and revolting in equal measures.

Hinks’s prose is fluid, the dialogue realistic, and plot and events progress at a very good clip. There were a couple of plot points that jumped or transitioned a little too easily or quickly (Svala’s rise in standing among the Fallen tribes, for example), but thinking back on it, I see why the decisions were necessary – stretching them out would have really ruined the pace of the novel, which is one of its greatest strengths.

The more I read of Hinks’s  work, the more disappointed I am with myself for not having read his award-winning Warrior Priest (I have since bought it as an eBook and will read it as soon as I get a free moment). Sigvald is a brilliantly fast-paced, twisted tale of debauchery and vanity, from an author who has an engaging and addictive style.

Very highly recommended for all fans of Warhammer and Black Library fiction.

[Check back on Wednesday 27th July for an interview with Darius Hinks!]