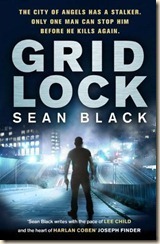 Adult movie actress, Raven Lane, is one of the most lusted after women in California, with millions of fans to prove it. But none seem to be more dedicated in their pursuit of her than the murderous stalker who is carving a demonic swathe across the streets of Los Angeles in an apparent bid to get her attention.

Fearing for her life, and with the LAPD seemingly unable to protect her, Raven turns to elite bodyguard, Ryan Lock for help. But with suspicion settling on Raven herself, Lock finds himself drawn into a deadly web of deceit and seduction.

This is the third novel featuring Ryan Lock – former Royal Marines investigator turned personal protection expert. As with Black’s previous two novels (Lockdown and Deadlock), Gridlock is a fast-paced thriller with a sympathetic protagonist and intriguing case to unravel. It lived up to my expectations, and Black continues to show growth and improvement in all aspects of his writing.

Gridlock is a straight-up thriller. Lock and his fiancée Carrie are in Los Angeles after a job, and their holiday is interrupted when someone in the LAPD recommends Raven hire Ryan as protection. Given how much Raven is offering for protection, and with Carrie’s ok, he and his partner Tyrone take the job. Only, things quickly become stranger and more complicated than he originally expected. More people are dying, and Raven isn’t telling them everything.

The identity of the killer and stalker remains a mystery for a very long time, as Lock acquires more information and things just don’t add up. It keeps the reader guessing, and lends certain events a greater level of shock as they throw up more questions.

I whizzed through this novel. Black writes in a very good, quick prose style (which has actually improved on his already assured writing). His characters and their interactions are realistic and don’t suffer the occasional tendency towards schmaltz that can plague some American thriller authors’ work (Black is British). There’s a good working dynamic between Lock and Tyrone, and a nice dynamic forms as well between Tyrone and Raven’s brother, Kevin, who also benefits from the protection the star hires. The characters are sympathetic, even when we don’t know their true motives. The bond between Ryan and Ty is obvious and well-portrayed. You will care for these characters.

If I have one disappointment, it’s that Black doesn’t delve much into the psyche of the killer, or his other characters. This prevents his novels from reaching the same level as, for example, John Sandford, Michael Connolly, or early James Patterson. The novel was certainly enjoyable, but didn’t feel like it had really enough to fully sink my teeth into it.

Overall, this is a fast-paced read and solid thriller. There are more meaty novels out there, but if you need a quick thriller fix, Gridlock will serve perfectly. Well written, nicely constructed, and with a heart-wrenching ending, Gridlock has a lot going for it. I’m very much looking forward to Black’s next novel.