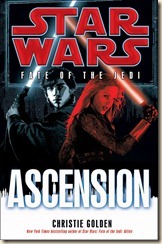 As this is the eighth book in the season, I’ll re-work the usual review structure to avoid spoilers.

The Fate of the Jedi series has seen the Star Wars universe taken in a number of new and interesting directions, following the game-changing events of the previous nine-book story arc (Legacy of the Force). Luke Skywalker, his family and the Jedi Order are faced with a number of growing and implacable foes.

This eighth novel ups the ante, and brings the various story threads closer to being tied off. The novel ends on quite a bang, and should whet readers’ appetites for the final book in the series, Apocalypse. The Fate of the Jedi series has been another entertaining chapter in the larger Star Wars saga, but it remains flawed despite some great developments. If you’re caught up with the series, read on for more information about this novel – I warn others that there are some minor spoilers after the break.

As Luke and Ben Skywalker pursue the formidable dark-side being Abeloth, the Lost Tribe of the Sith is about to be sundered by an even greater power – which will thrust one Dark Lord into mortal conflict with his own flesh and blood.

On Coruscant, a political vacuum has left tensions at boiling point, with factions racing to claim control of the Galactic Alliance. Suddenly surrounded by hidden agendas, treacherous conspiracies, and covert Sith agents, the Jedi Order must struggle to keep the GA government from collapsing into anarchy.

The Jedi are committed to maintaining peace and ensuring just rule, but even they are not prepared to take on the combined threats of Sith power, a deposed dictator bent on galaxy-wide vengeance, and an entity of pure cunning and profound evil hungry to become a god.

This series, just like Legacy of the Force before it, has brought some of the newer characters closer to the centre: Jaina Solo and Ben Skywalker, as the next generation of Jedi heroes, are far more central to recent story arcs, and have as much if not more face-time as their parents. Ben, in particular, is a strong character, and I think he will long form a strong focal-point for upcoming novels in the saga. His budding, potential romance with Vestara – a Lost Tribe Sith apprentice and nominal hostage of Luke’s – has potential for storylines in the future, and it will be interesting to see how authors develop this in novels to come (if, indeed, they decide to do so). Luke’s own reaction to this relationship is nuanced and mildly amusing for the reader – a mixture of natural, paternal concern for a son bringing home an ‘inappropriate’ girlfriend, and his overt dislike and distrust of anything Sith. Jaina is an equally strong character (who reminds me a lot of her parents, Han and Leia), but after her central role in the previous nine-book arc – especially the climax – she seems to have been a bit more peripheral to the Fate of the Jedi story. It will be nice to see her brought more central again in the future.

Ascension begins with the arrival of Abeloth on the world of the Lost Tribe of the Sith, brought there by Vestara’s father in an attempt to form an alliance against the Skywalkers and the Jedi Order. This was all done with a lot of detail – perhaps too much, if I’m honest, and it dragged on a bit. Abeloth’s visit ends with a surprising break in relations, and sets the various Sith forces on a whole new course, as they are split into factions. This took me completely by surprise, and happened with a decidedly Sith-like cold suddenness. Very well done. Unfortunately, the pacing of the novel dropped off for some time after this.

The time we spend with the Skywalkers and their travelling companions are easily the best. Luke, Ben and Vestara are now joined by Jaina, as they continue to hunt Abeloth and the rogue elements of the Lost Tribe. This takes them to Korriban, the Sith homeworld, and eventually two other ancient Sith worlds. This strand felt at first like a red herring or wild-goose chase. However, on the second world Vestara confronts her father, now sworn to Abeloth’s cause. This sets her on a path that could, potentially, bring her ever more to the Light Side. Her actions throughout the novel are closely watched by the Skywalkers – Ben in the hope that she’s turning to the Light, Luke because he doesn’t trust her apparent transformation. As we get to see through the novel, it remains unclear which side Vestara is eventually going to come down on.

Han and Leia are still neck-deep in the political machinations focused on Coruscant, as more information comes to light regarding former Chief of State Daala’s improbably escape from custody (along with Tahiri Veila), and also who is pulling the strings of Freedom Flight – the pan-galactic movement driving slavery from the galaxy. As the politicians play their games, Han and Leia get to ‘enjoy’ some action and adventure of their own as they once again become pawns in others’ agendas.

While there is plenty in this novel that is entertaining, ultimately I would say that the Fate of the Jedi is starting to feel a little drawn out. I am heartened by the fact that the next book, Apocalypse, is the last in this story arc. If past experience is anything to go by, it should close the series with quite a bang. However, I’m not sure if this justifies the nine-book format. The last three books could have been compressed into one, I think.

I’ve said it before (perhaps I’m becoming a broken record), but I really think nine books in a single Star Wars story arc is just too many. Trilogies, or four- or five-book arcs would be more advised. This worked perfectly for a very long time, until the New Jedi Order mega-arc came about. Before this, stand-alones, trilogies, and duologies were the norm, and it kept the action ramped up, and the stories tight and highly satisfying. Part of the problem, I think, is the need for each book to re-cap at least in part what happened in the previous novel. Given the short time between their publication, this means more of the novels is devoted to telling us what has happened, rather than moving the story forward.

As has also become the norm, the second half of the novel was far better than the first, as events came to a head and it felt like the story was properly moving forward. Golden throws up some unexpected twists and turns of events which I hadn’t been expecting. Luke and Ben return to Coruscant for the first time since their exile was imposed in Outcast, to a still-damaged and grieving Jedi Order. His first action is to order something that takes all of the Masters (and the reader) by surprise, even though it is also exactly the correct choice.

Some things are dealt with almost off-handedly, as if they don’t matter (yet clearly do), while other things are belaboured when they aren’t very important (or prove not to be very important the more books we read in the series). This is very odd, and not confined to Golden’s books; it happens in Allston’s and Denning’s contributions to the series as well. This pacing oddity also meant it wasn’t entirely clear how much time was passing – I’m sure there had to have been quite a shift at one point, otherwise some plans (both Abeloth’s and also the Lost Tribe’s) were put into motion far to quickly to have been realistic.

Golden’s writing is fluid and well-put-together, with only a few overly-descriptive flourishes. She’s a gifted author, and I would love to see what she can accomplish when not restricted to ‘filling-in’ novels. The action is well done; dialogue is realistic and thankfully devoid of any cliché or schmaltz. The pacing, as is probably clear by now, was a bit disappointing to begin with – we know there can’t be much closure, so it feels like the story is still treading water a bit, as everything gets set up for the series finale. It is this fact that prevents the novel from being a truly satisfying slice of Star Wars escapism.

The Star Wars series, for me, was always about adventure. There is still plenty of adventure across this series, but because of its length, the adventure is somewhat smothered by the bits in between. If it had been contracted, this series could have been one of the best within the larger Star Wars canon. As it is, The Fate of the Jedi is entertaining but by no means among the best Star Wars fiction. Ascension is, however, one of the best in this nine-story arc. The ending is sure to appeal to long-time fans of the series, and the last 75 pages were well-paced and action-packed. It felt like I was reading some of the earlier Star Wars fiction, as events moved relentlessly towards the shocking conclusion. It’s just a pity the rest of the book wasn’t like that. Apocalypse (published in December 2011) promises to be quite exciting, and hopefully Troy Denning will be able to hit the ground running and maintain the action throughout.

Posted by Civilian Reader at 10:19 AM