An Interview with MIKE LEE 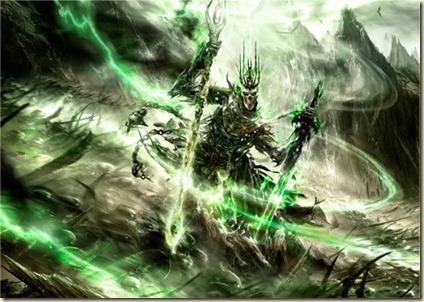 Mike Lee has written or been involved with a surprising number of things that I like: from his work for Black Library to his work on White Wolf’s RPGs, I had no idea just how familiar with his work I actually was. Having recently released the final novel in his trilogy chronicling the rise of the undead in the Warhammer universe, I thought it would be an excellent time to get in touch to find out even more about his work. 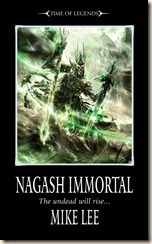 The third novel in your Nagash series, Nagash Immortal has just been published by Black Library. What’s it like writing the story of such larger-than-(un)life characters, and how did you approach the subject and series?

The Nagash series was the most challenging series of books I’ve ever written, without a doubt. The sheer scope of the story was daunting – from start to finish, the trilogy spans about 600 years, more or less – plus, it dealt with some of the most iconic characters in Warhammer Fantasy lore. In addition, the history of Nehekara is largely a blank slate before the rise of Nagash – we know little or nothing about what the kingdom and the Great Cities were like in the days of the great Priest Kings. So I also had the privilege – and challenge – of creating an epic setting that was worthy of the characters as well.

The first step, of course, was to do my research. I read everything I could get my hands on about Nagash and Nehekara, though GW restricted me to just the information contained in the various editions of the Tomb King Army Books. The Liber Necris, though full of all manner of interesting characters and story elements, was off-limits, and not considered canon. 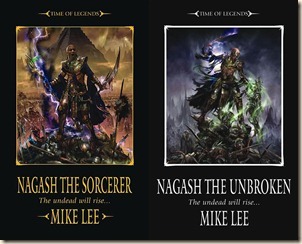 So I took the story and characters from the Army Books, and then worked out how I was going to tell the story across three books. There were a huge amount of challenges to overcome, not least of which was the fact that my main character becomes immortal during the course of book one, but many of the supporting characters do not! This meant a lot – and I mean a LOT – of careful juggling of the timeline and placing events so that I wouldn’t have to introduce the reader to a whole new set of supporting characters every few chapters, as the previous generation grew old and died off! (One of the directions I took at the outset was to suggest that the ancient Nehekarans just lived longer than humans of the “modern” age, by virtue of the blessings of their gods. That helped a great deal.) Even then, I had to decide which events to focus on and which to gloss over, or cut entirely, for the sake of length. The Nagash trilogy could easily have been six books or more, when all was said and done. A lot of events were shortened or left on the cutting room floor because there just wasn’t room for it all.

Finally, my editors at BL really wanted the series and the setting to have an epic, almost mythical feel. Each city needed to feel unique and interesting, so I put a lot of work into detailing them at the very beginning, and figuring out how they would work within the story. 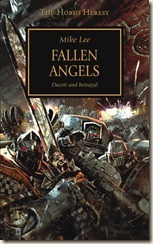 You have also contributed to the Horus Heresy series of novels. What can you tell us about Fallen Angels, and are there any plans afoot for you to write for this series again?

Fallen Angels is a sequel to Mitchell Scanlon’s Descent of Angels, and delves deeper into some of the mysteries surrounding the Dark Angels and what they were up to in the early days of Horus’s rebellion. It also raises some questions about the nature of Caliban and the reasons behind the betrayal of Luther and the Fallen. Lots of interesting stuff for fans of the Dark Angels to debate over. J

I would love to continue writing for the series, and hope to do so in the future, but I don’t have any immediate plans to do so.

I know your work primarily through the novels you’ve written for Black Library. What other projects and novels have you worked on?

Before I started writing for Black Library, I was a writer and game designer for the tabletop RPG industry. Nearly all of my work was with White 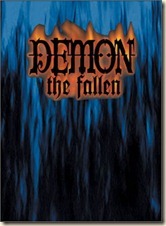 Wolf Studios and their World of Darkness RPGs. From about 1996-2004, I contributed to more than two dozen rulebooks and supplements, including Vampire: the Masquerade, Vampire: Dark Ages, and Hunter: the Reckoning. I was also the principal creator for Demon: the Fallen, the last of the old World of Darkness RPGs, and was the developer for the game line during its short life.

In addition to writing novels for Black Library, I also write for the video game industry. The two most recent projects I’ve worked on were Splinter Cell: Conviction (I created the characters and wrote the dialogue for the co-op game), and Prey 2, a futuristic first-person shooter produced by Human Head Studios.

When I was 10 years old, I went to see this movie that had just come out in theaters, called Star Wars. Nothing was the same after that. From there, I went on to discover fantasy fiction, and I read everything I could get my hands on, from Fritz Leiber, to Edgar Rice Burroughs, to J.R.R Tolkien and beyond.

Everywhere. Books, movies, history and current events. You name it. Storytelling is about taking bits and pieces of other stories and putting them together in new and interesting ways. Sometimes it’s a conscious process, and sometimes a bunch of things in your subconscious just come together and suggest a story to you out of the blue.

Writing is an immensely cool job, but it’s also a lot of hard work. A novel is a test of endurance as much as anything else; you have to invest months and months of effort into one, until it feels like you’ve been working on that one book forever, and there’s no end in sight. That means late nights, weekends, holidays – whatever it takes to get the job done. And then, as soon as you’re done, you start the next one. It’s a career that’s fraught with isolation and uncertainty, rejection and criticism. It’s definitely not for the faint of heart.

My writing process is pretty well-established at this point: first I do whatever research the story requires, then once I’ve got all the info I need, I sit down and exhaustively outline the book from start to finish. By the time I’m done with the outline, it’s almost a rough draft in and of itself. Then it’s just a matter of starting at chapter one and writing until I reach the end. I’m not one of those writers that can skip sections or chapters and come back to them later – I’ve got to have each scene nailed down before I can move on to the next. 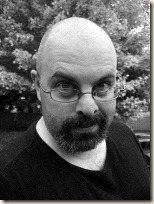 I’d been making up stories with my friends pretty much all my life, but the idea of actually becoming a writer didn’t occur to me until my thirteenth birthday. I vividly remember my mother asking me what I wanted to do when I grew up, and the answer just popped into my head. I wanted to be a writer.

From that point on, I was constantly at work on one novel or another, certain that each and every one was a sure-fire New York Times bestseller. Every one of them stole shamelessly from books, movies and TV shows of the time. There was a science-fiction epic that was a combination of Battlestar Galactica, Starship Troopers, Buck Rodgers and Star Blazers. Then there were a couple of horror novels that ruthlessly plundered from Kolchak: The Night Stalker. And then there was my high-fantasy epic that borrowed a bit from Middle Earth, a bit from Shannara, and a bit from the post-apocalyptic RPG Gamma World.

I actually started work on the SF epic and the fantasy story in around eighth grade, egged on by my best friend (and sometime collaborator) at the time. I gave up on the SF epic shortly thereafter, but kept tinkering with the fantasy story through high school. They were terrible, of course; alternately hilarious and painful to read. They were so bad in fact, that during one summer in college I dug them all out of my closet and burned them. It seemed like the only humane thing to do.

But you know, I think about those stories very fondly. They were horrible in retrospect, but at the time they were the stuff of magic. Without a doubt they kept me sane through some really difficult years.

And you know, one of these days I might revisit that old fantasy epic. It actually had a bit of promise to it.

That’s an interesting question. These days, the genre is dominated by urban fantasy and paranormal romance, largely supplanting the epic high fantasy series that were common in the 80’s and 90’s. But it seems like the pendulum is starting to swing back the other way. I think the popularity of Steampunk, for example, represents an attempt to push the boundaries of the urban fantasy into a broader, more fantastical setting once more. At the same time, fantasy stories are getting darker and grittier than before, focusing more on humans than the clichéd fantasy races that Tolkien and his peers made popular. Authors like George R. R. Martin, Joe Abercrombie and Scott Lynch are just three examples of this growing trend.

I see myself as sort of straddling the line between Tolkien’s lyrical, high fantasy, and Martin’s grittier, more “real-world” storytelling. I love the sense of wonder and epic sweep in the older fantasies, but I think they work best when viewed as a backdrop for intense, personal stories that people can immediately relate to.

What projects are you working on, and what do you have currently in the pipeline? Anything non-Black Library?

At the moment I’m actually taking a much-needed break to rest and recharge my creative batteries. I’ve been talking with Nick Kyme about returning to Warhammer 40,000 for a bit, but it’s all early days yet. We’ll see.

I just finished Chris Wooding’s Retribution Falls, which is a great, fast-paced steampunk story – kind of like Serenity, only with airships. Now I’ve moved on to Glen Cook’s Darkwar omnibus, which is a very cool dark fantasy trilogy with an intriguing, non-human protagonist. I highly recommend all of Cook’s novels, both fantasy and science fiction. His Black Company series was a tremendous influence on my own work, and I don’t think he gets nearly the attention he deserves. 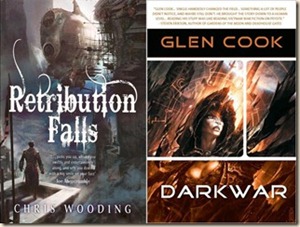 Despite everything I’ve written for Black Library so far, I don’t actually enjoy writing about vicious, evil characters – and yet, that’s been my stock in trade going back as far as my White Wolf days.

Setting up my new office at home and getting back to work on a novel. Glamorous, I know. Such is the life of the writer.

Posted by Civilian Reader at 9:47 AM