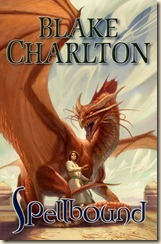 A strong second outing for hero Nicodemus Weal and his allies

Francesca DeVega is a successful healer in the city of Avel, wielding magical text to close wounds and disspell curses, but her life is thrown into chaos when a dead patient suddenly sits up and tells her to run. Now Francesca is in the middle of a game she doesn’t understand, one that ties her to the notorious rogue wizard, Nicodemus Weal, and brings her face-to-face with demons, demigods, and a man she thought she’d never see again.

It has been ten years since Nicodemus Weal escaped the Starhaven Academy, where he was considered disabled and useless, where he battled the demon who stole his birthright and killed his friends. Unable to use the magical languages of his own people, Nico has honed his skills in the dark language of the kobolds, readying himself for his next encounter with the demon. But there are complications: his mentor suffers from an incurable curse, his half-sister’s agents are hunting him, and he’s still not sure what part Francesca DeVega will play. He certainly doesn’t know what to make of Francesca herself…

Spellwright was one of the surprise debuts of last year, so I was very eager to discover what Charlton would offer up in his second novel. As it turns out, Spellbound is great; it builds nicely on the first novel, expanding the world and unique magic system. I really enjoyed reading this, and am now impatient for the third book.

As mentioned above, it’s been ten years since the end of Spellwright, which was an interesting choice – our characters have been through a lot since we last saw them, but we haven’t been ‘present’ for any of it. Nicodemus has been making a name for himself as a rogue wizard, as rumours of what went down at Starhaven Academy do not exactly resemble the truth, and also has had a prolonged campaign against Typhon, the demon who stole his ability to spell. He remains with his supportive band of kobold allies and former teacher, the aging Shannon. The first half of the novel doesn’t feature Nicodemus as much as I would have expected – instead, Charlton introduces us to Deirdre’s predicament as a thrall of Typhon, and also Francesca’s suddenly precarious situation. Through these two characters, we get a crash course (literally, in one case) in the magic systems of this world, and also the politics and factions at work.

The magic system Charlton has created is amazing, based on a number of various textual methods. In Spellbound we learn of the Heirophants, whose magic can only infuse cloth (and allows for some intriguing opportunities with war kites, wind wardens, and airships); the highsmiths who infuse metals with magic; and more of the druids who infuse wood with their texts. We also learn more about Typhon’s abilities, and his plans for Language Prime. The author’s medical training comes through in the way Francesca uses her magical abilities (she’s a trained physician, but started out learning to become a spellwright), and Charlton has come up with some intriguing and ingenious ways of substituting textual magic for modern medical practices.

Charlton’s characters are very realistic, and it is a pleasure to read about them. Thanks to Francesca (who has a lot of moxie, and is quite sassy with pretty much everyone she meets), the banter can frequently be amusing and endearing – particularly when she’s conversing with Nicodemus, who is himself quite the conversationalist. There is a fine humour sprinkled throughout the novel, balanced well with the bloody action sequences and Nicodemus’s changed character – it’s clear he’s been through a lot of difficult experiences since leaving the Academy, which has hardened his outlook on life. This is quite interesting, as I thought Nico sometimes over-emoted in Spellwright, whereas in Spellbound he is a much harder character, almost cold. I thought this was a very good development, while keeping him recognisably the same character. Shannon has also been changed by the long war against Typhon; only where Nico maintains his fervour, Shannon’s illness is slowly wearing him down. Charlton has also created and included an original take on lycanthropes, which was not at all what I expected. And I love how dragons are approached – which, if you look at the cover, are clearly important to this story.

Charlton has certainly improved as a writer. His writing, and dialogue, and the humour he’s woven into the story are all great, and you quickly forge attachments to the characters. The new location – Avel and its surrounding savannahs and forests – is vividly evoked on the pages, and there are many striking atmospheric scenes. In the decade since he left Starhaven, Nicodemus has wracked up a number of enemies, and he is a person of interest to a great many factions – all working towards their own agendas, assuming Nico is a prophesied saviour or villain in a coming war between men and demons. Over the course of this novel, we get to know more of these factions, where they are from and also how they operate.

I must admit that there was a slight re-entry issue with the ten year jump in time – there are allusions to and mentions of events that have happened in the decade of Nicodemus’s mission, but I sometimes felt a little bit like I’d missed either a novel or a short story set in the meantime. (Incidentally, I would certainly be interested in reading such a novel or novella.) This didn’t make too much of a difference for the story, however, as the action comes quick and often in Spellbound, as Nicodemus moves his plans forward, and the mysteries posed by Francesca and the Savannah Walker are slowly unravelled. The novel is written in a measure, well-timed pace – Charlton does not seem to be in a rush, and this works very well for the novel. This is not to say the novel is slow or that the story gets bogged down in details – in fact, I’d say the novel is very streamlined, and Charlton hasn’t padded his novel with extraneous exposition or description. In a rare twist of fate, life intruded on my time reading Spellbound (just as it had when reading Spellwright), but I found it just as easy to sink into the story and get swept up by events each time I picked it up.

Spellbound, as with the debut novel is, in part, about overcoming and living with disabilities. Nicodemus is cacographic, but in the decade since leaving Starhaven he has in a way overcome his disability by learning to use the kobold’s magic (which his disability does not mangle or automatically disspell). There is a touching scene later in the novel when Nicodemus is talking with another character suffering from a new disability, and it’s a rare moment up until that point when Nicodemus’s softer side comes out. The novel also looks at the lengths people might go to ‘fix’ problems and personal limitations – perceived or actual – especially when it is forcefully imposed upon you. At the same time, it is a novel of acceptance and overcoming adversity, and how those around us can provide strength and support.

Overall, this is a series that keeps getting better, developing while retaining its classic feel, and continues to be a rewarding read. Charlton is a rare talent, and Spellbound is a wonderful, engaging and well-crafted novel. Highly recommended for fans of magical fantasy, looking for something original and unique. I really enjoyed this. 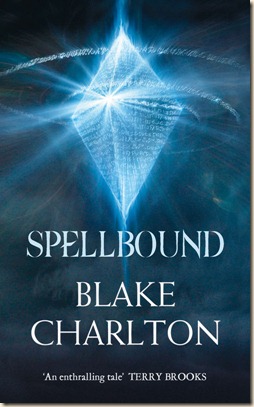