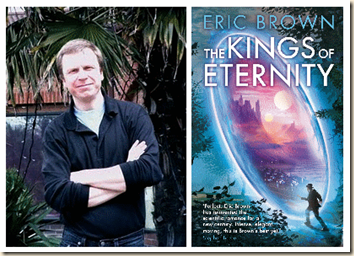 In this post, prolific sci-fi author and editor Eric Brown (Solaris/Abaddon) talks about the authors who have influenced his own writing and interest in genre fiction.

I’ve been influenced by many authors over the years. 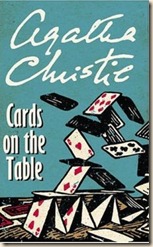 I began reading late, at fifteen, when to stifle my complaints of boredom one summer while living in Melbourne, my mother gave me Agatha Christie’s Cards on the Table. It was revelatory. Until then I had no conception of the power of fiction, of the written word. For the first time I was allowed into the heads of other people, of characters with thoughts and viewpoints other than my own. I devoured all her books over the course of the next year, and at the same time discovered science fiction.

I came upon the works of H.G. Wells and Robert Silverberg at the same time, and if I’d found Christie revelatory, then you can imagine what these writers did to my head. I read all Wells’s scientific romances (and was bitterly disappointed when I finished them and tried to read his social novels) and began collecting Silverberg.

Over the years, the latter was a great influence. He went through many different incarnations as a wordsmith. There were the early, shlock years during which he churned out hundreds of SF stories and dozens of short novels. I devoured these without prejudice or criticism, enjoying them for what they were - thrilling, fast-paced action adventures full of aliens and ray-guns etc. 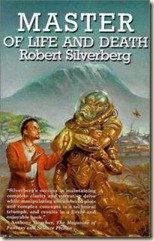 (I have fond memories of two particular early Silverberg novels, The Master of Life and Death, and Seeds of Earth - though I fear rereading them in case I find that they don’t live up to my recollections.)

Then there was his classic period, in the late sixties, early seventies, in which he wrote the amazing Dying Inside, Thorns, Hawksbill Station, Downwards to the Earth, Nightwings, Son of Man, The Book of Skulls and many more. These were accomplished literary novels, and I was in awe of how Silverberg had reinvented himself, from an competent hack to a serious novelist of ideas. He was truly inspirational. (Then came his later books, the big entertaining novels which, though lacking the depth and seriousness of his best period, were nevertheless thoroughly readable and the work of a top-class story-teller.)

The writer in me liked the idea of high productivity, and I realise that many of the writers I've found influential down the years have been large producers. I don't know whether this is the result of some working-class ethic picked up in my formative years in West Yorkshire, or a residual Protestant work-ethic, but in any field I admire hard workers, and also the idea of not letting the bastards get you down.

That's probably why I admire so much the little known writer Rupert Croft-Cooke, (1903-1979). He published thirty-odd novels on a wide variety of subjects in a writing life spanning over fifty years, as well as poetry, plays, non-fiction books on such diverse topics as Buffalo Bill, Oscar Wilde, Lord Alfred Douglas, Victorian writers, criminals, the circus, gypsies, wine, cookery, and darts. Under the pen name of Leo Bruce he also wrote more than thirty crime novels.

His most important contribution to English letters was the series of twenty-seven autobiography-cum-travel books, The Sensual World. In these he remains very much in the background, and it's the people he meets, the places he visits, the events he describes, which are the true subjects of his books. He led a long, varied, and interesting life; his travels took him all around the world and he met hundreds of fascinating and famous people.

His books rarely went into second editions, so he had to write two or three (sometimes four) a year in order to survive, and he chose to live in countries where the living was cheaper than in Britain. He lived in Morocco for fifteen years, from 1953 to 1968, and then variously in Tunisia, Cyprus, Madeira, Germany and Ireland. 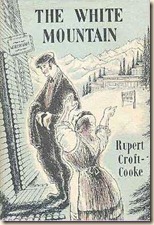 He suffered various travails. In ’32 his novel, Cosmopolis, (later republished as The White Mountain), based on his time as a teacher in a school in Switzerland, was withdrawn from publication on grounds of possible slander. His publisher, Hutchinson, drew up a crippling contract compelling him to write four novels a year in order to pay off the debts incurred by the company.

In ’53 he was jailed for six months for alleged acts of homosexual indecency. He endured the privations of Wormwood Scrubs and Brixton jail and wrote a searing indictment of the British penal system in his 1955 book The Verdict of You All. And yet, despite these knocks and set-backs, he remained optimistic and lacking in rancour, self-pity or hatred.

Sadly, Rupert Croft-Cooke is a writer little known and little read today. He had no best-sellers or lucrative film deals, and his books are no longer in print. He was essentially a jobbing professional writer who wrote with honesty, integrity, and utmost concern for his craft.

I collect his books, attempt to read everything he's written (a mammoth task) and find his work and his life truly inspirational.

Check out Eric’s website for more information on his various writing projects.

Posted by Civilian Reader at 10:43 AM