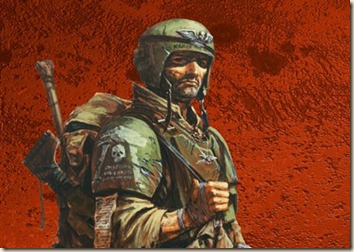 Hive of the Dead is the first Warhammer 40,000 game-book. I thought this might have been like the old Fighting Fantasy games, which is does share some elements with, but it looks like it’s a little more than that as well:

“Using rules reminiscent of those in the Warhammer 40,000 tabletop game, albeit without models and terrain, with just this book, a six sided dice and a pencil, you can battle the zombie hordes from the comfort of your armchair.” 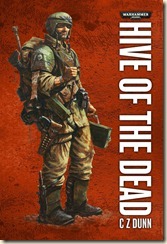 The book is Print-On-Demand, which does make it a little pricey (13.00), but if you’re on the move and still fancy some form of WH40k gaming experience, then I imagine this will suit your needs. Here’s the synopsis:

The forces of Chaos are moving against the Imperium once more, and only YOU can stop them!

The first in a new series of Warhammer 40,000 adventure game books, Hive of the Dead casts you in the role of an Imperial Guardsman, fighting for survival upon the plague-ridden world of Subiaco Diablo at the beginning of the Thirteenth Black Crusade. Face all the horrors of Abaddon’s legions, including Death Guard Chaos Space Marines, the walking dead, and foul warp-spawned daemons.

Will you make the ultimate sacrifice for the good of mankind, or will your name be forgotten with the rest?

As a kid I was drawn to the aesthetic of Warhammer 40k (and also Warhammer fantasy), but because I was always living abroad, there was never anyone to play a game with. This was actually fine by me, as I always preferred the fiction and modelling aspect of the game. That being said, if something like Hive of the Dead had been available back then, I imagine I would have been all over it.

Here’s something from the press release that I thought I’d share, because you can rarely go wrong with art of mutated zombies. “All You Need to Know About Mutant Zombies”, one could call it: 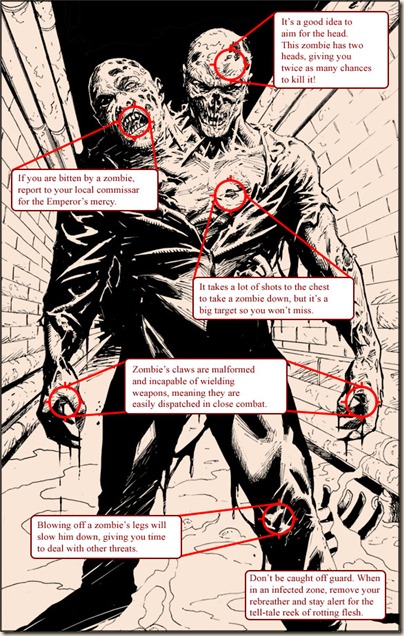 “The book starts as it means to go on, with you near-helpless and alone, and facing shambling, flesh-eating horrors.” Sound like your cup-of-tea? Hive of the Dead can be ordered through Black Library’s website, here. You can also follow/participate in a game through the BL Blog, to get a taste of the game.