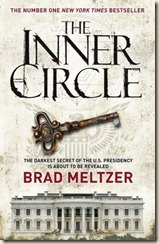 Beecher White, a young archivist for the US government, has always been the keeper of other people’s stories, never a part of the story himself... Until now.

While Beecher is showing Clementine Kaye, his first childhood crush, around the National Archives, they accidentally uncover a priceless artefact – a two-hundred-year-old dictionary once belonging to George Washington. Suddenly Beecher and Clementine are entangled in a web of conspiracy and murder.

Beecher’s race to learn the truth behind this mysterious treasure will lead to a code that conceals a disturbing secret from the nation's founding. A secret that some believe is worth killing for.

I’ve had generally good experiences reading Meltzer’s novels – only one of them has been disappointing, so I came to The Inner Circle with high hopes that the author would once again entertain and thrill. It’s doubly interesting for me, because I’m always fascinated by anything that features the US Presidency. The Inner Circle is well conceived, but the execution was disappointingly flawed.

The story of The Inner Circle sounded like it would be a great return to form for Meltzer – taking us into the political mysteries of Washington, D.C. The synopsis really makes it seem like it’ll be firmly in the same oeuvre as The Da Vinci Code or something similar. In fact, it’s not – mainly because of the story’s balance, and also the relative lack of attention paid to the historical/conspiracy side of the story. I understand why his publisher markets Meltzer’s novels this way – he likes to unravel a mystery and, where possible, a conspiracy – but there are considerable differences. However, with The Inner Circle, I felt Meltzer did not reach his potential.

It takes a little while to get going. Beecher is a strange character – he is alternately over-emotive as well as bizarrely cold. Meltzer kills off someone supposedly close to him in rather quick order, which gives him the emotional investment to get us going on this mystery. The speed with which this happens actually means we don’t really feel the friendship, especially as we’re told the deceased is often rather annoying.

It actually takes 200 pages before we really get into why we’re all here in the first place – the mystery surrounding the book Beecher and Clementine discover in the President’s private research room at the National Archives. That’s all we’re really here for, if we’re honest, and it was very frustrating that it took so long for Meltzer to set up the main premise of the novel. Or, to be more accurate, to stick with the main premise.

The novel meanders too long, and only gives us minute detail and information about why we should care about the dictionary they find. At the same time, some events jump around and come across a little jumbled. Beecher switches allegiances quite easily, when presented with rather flimsy evidence of his companion’s betrayal or hidden agendas. There are some interesting twists and turns, many of which I didn’t predict, but it nonetheless felt underdeveloped.

The mystery and historical conspiracy is why we’re reading, but it just didn’t really feature enough in the novel – there seemed to be too much attention paid to peripheral issues. Clementine, the love interest, for example, was a bit weak, and I’m sure there would have been a better way to do incorporate her into the story, or at least give us a little more development. For my taste, there simply wasn’t enough playing about with history and mystery that is meant to be at the centre of the novel. We’re expected to just accept the fleeting details.

Meltzer clearly loves the history and source material – if he let it show more, let it be far more central and make up far more of the novel, it would have made a much better book overall. (He has a TV series, Decoded, now entering its second season, which looks into historical mysteries – I’ve watched two of ten episodes and will review it over the next week.)

Meltzer’s characters aren’t all bad or weak by any means – the aged archivist Tot and a couple of the President’s friends are pretty solid (and I would have liked to have seen more of them). But, having read all of Meltzer’s novels, Beecher reminds me of every male protagonist the author has written. He’s almost identical: he’s well-meaning, flawed, low in self-esteem, and somewhat naïve. This is not necessarily a bad thing (he’s sticking with a formula that works), but this time our protagonist just doesn’t seem quite as well-rounded and fleshed out. The emotions of all the characters in The Inner Circle, particularly Beecher’s, feel a tad over done – like stage actors making the transition to film, everything is a little more than necessary.

The novel has a great premise, but it is not quite executed to its fullest potential. I think it’s meant to be the start of a series, which gives me hope that Meltzer might be able to focus on some other mysteries or the workings of the Culper Ring, rather than mess about wasting as much time on the Beecher-Clementine potential-love-story aspects of the narrative (which really didn’t work for me at all), not to mention the flashbacks which weren’t quite woven in or set up as well as Meltzer has managed in his past novels – I found that they took me out of the story too often.

Ultimately, The Inner Circle failed to ignite my imagination and interest, despite the solid and enticing premise. The problems the novel suffers from are not unique – there are many other thrillers that fall into the same traps. Whenever Meltzer dangled something about the Culper Ring, US history, or the National Archives, I was hooked. But the human story that surrounds the mystery is almost smothering and pulled me out of attention each time. I’ll probably read any sequel that comes out, as I’m a sucker for these types of novels, but I won’t rush out to buy it. I just hope Meltzer manages to rekindle some of the thriller magic and writing panache of his earlier novels. Otherwise, I’ll find his work going the way of James Patterson’s. 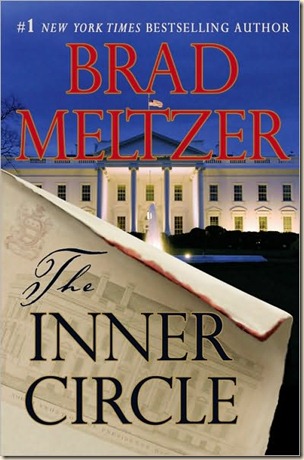 US Edition (Published by Grand Central)