This is going to be a series of posts on interesting or quirky book stores I find while on my travels. I’ll talk about selection, anything interesting about them, or anything of note. Unfortunately, all of the bookstores in and around Westwood (where I’m staying) appear to have closed, so I’ve had to go further afield. This does mean that I’ll probably end up at more big-name branch stores rather than indies, but I’ll do my best to find some of those, too.

First up, something quite conventional: the Barnes & Noble in Santa Monica. 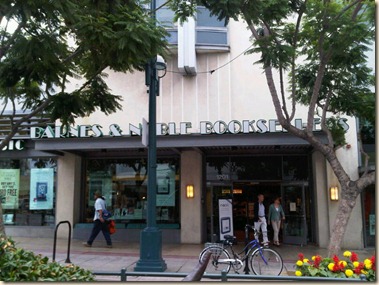 Since arriving in Los Angeles on September 13th, I’ve been constantly on the look out for book stores (this should come as no surprise, really). Thus far, I’ve seen two closed and gutted Borders stores, and only been able to visit one actual store: the Barnes & Noble in Santa Monica.

It’s an interesting store – three floors, but not really that many books. The first floor is devoted to arts, music and so forth, as well as a bargain-price section (which did have some interesting offers on last year’s thriller hardbacks among many others). There is a preponderance of books that have a film or TV adaptation either already out or in the works – so, there were tons of copies of George R.R. Martin’s A Song of Ice and Fire, Charlaine Harris’s Sookie Stackhouse series, and also a fair few box sets of Susan Collins’ Mockingjay series. Sadly, they didn’t seem to be adept at shelving their stock properly – a lot of their hardback new releases were damaged (ripped or crumpled dust-jackets in particular). One book I wanted to buy was stacked in roughly 20-30 book towers, and it would have been a real pain to get to the undamaged ones near the bottom, so I didn’t bother.

I must have looked pretty lost when I first walked in there, because the guy manning the Nook desk was quick to ask me if I needed any help. I mentioned that I was just browsing, and he gave me the run down of the tour and where to find everything in my preferred genres. He also told me about the book that has been a bestseller at that store for three years, Gregory David Roberts’s Shantaram: 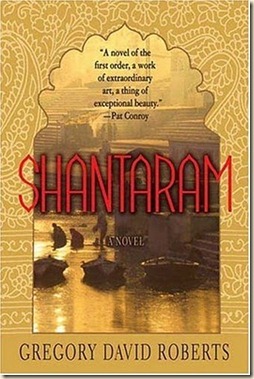 It sounds pretty interesting, but I admit I didn’t buy it. I’m still at the start of my trip, so I don’t want to load up on chunky tomes that I won’t be reading in the near future. (Thus far, I’ve only seen it available for Kindle in German.) Here’s the blurb:

In 1978, gifted student and writer Greg Roberts turned to heroin when his marriage collapsed, feeding his addiction with a string of robberies. Caught and convicted, he was given a nineteen-year sentence. After two years, he escaped from a maximum-security prison, spending the next ten years on the run as Australia’s most wanted man. Hiding in Bombay, he established a medical clinic for slum-dwellers, worked in the Bollywood film industry and served time in the notorious Arthur Road prison. He was recruited by one of the most charismatic branches of the Bombay mafia for whom he worked as a forger, counterfeiter, and smuggler, and fought alongside a unit of mujaheddin guerrilla fighters in Afghanistan.

His debut novel, Shantaram, is based on this ten-year period of his life in Bombay. The result is an epic tale of slums and five-star hotels, romantic love and prison torture, mafia gang wars and Bollywood films. A gripping adventure story, Shantaram is also a superbly written meditation on good and evil, and an authentic evocation of Bombay life.

It’s available in the UK, so I might pick up a copy there, or I might get it on the next leg of my journey, when I go to New York.

So, anyway, I then went to look for the fiction and politics books – all on the third floor (the second floor, as far as I could tell, was devoted to their Kids Zone and also a lot of Lego sets… Which I admit I was a little tempted by). That’s when I discovered two things: First, genres are pretty flexible categories in the US. And second, I’d totally forgotten about US editions often having different cover artwork. So it took me a while to find some thrillers (in the fiction section) and some fantasy titles (also in the fiction section).

The politics and history sections had a surprising number of books penned by Fox News contributors.

I also didn’t realise how large Pyr’s releases were – they don’t seem to do smaller paperbacks, which is a problem when you’re limited by luggage allowances. Grr.

So, I spent three hours in there, browsing and hunting for things. But I didn’t buy anything! I did, however, take down some names and titles to investigate online (reviews, details, etc.). 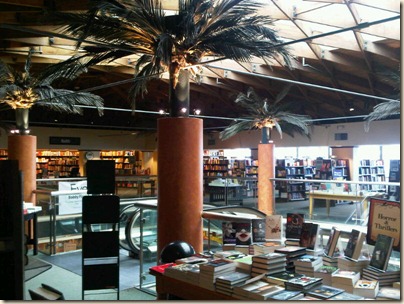 Posted by Civilian Reader at 8:34 PM