An Interview with MIKE LAWSON

I’ve been a fan of Mike Lawson’s work ever since I stumbled across his debut, The Inside Ring, back in 2006. I’ve read all of his thrillers, and with the recent publication of House Divided, the latest in his series, I thought it would be a perfect time to get in touch with him and ask him a little more about his writing. The interview will also, hopefully, introduce him to more readers – I’ve always thought, given how good his novels are, he deserved far more attention than he appears to get in the UK.

Your sixth novel, House Divided, was recently published in the US. The series hasn’t been as widely available in the UK as in the US, so I was wondering if you could introduce the Joe DeMarco series as a whole and also the new novel to new readers? 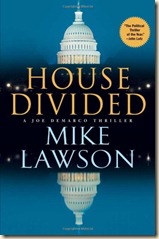 Regarding the series, and because of my background working for the US Navy, I wanted to write books that had some sort of connection to Washington, D.C. because, for a writer, D.C. is a “target rich” environment. There is always something going on there: corrupt things, absurd things, devious things and, yes, sometimes heroic things. So, almost all my books have some basis in real events, like my last one, House Divided, which was based on illegal eavesdropping by the National Security Agency that occurred during the Bush administration.

The protagonist in my books is a guy named Joe DeMarco, and he’s basically a fixer for a vaguely corrupt politician.

What inspired you to write the DeMarco series, and where do you draw your inspiration from in general?

As I said above, Washington inspired me to write the stories – i.e., the things that happen in Washington. My third book (House Rules) is based on an article I read about the no-fly zone around D.C., my fourth book (House Secrets) was based on rumors surrounding John F. Kennedy’s links to a Chicago mobster, and my fifth book (House Justice) was inspired by the Valerie Plame case, where Plame, a CIA agent, was basically “outed” by a U.S. politician.

I love being a writer. There’s nothing more I’d rather do than make up stories, and the people I’ve been associated with – my publisher, my editor, my agent – have all been terrific. I enjoy meeting other writers, and have found that most of them are ordinary, likeable folk.

Regarding my work practices, I write every day, usually get up about five a.m. and start writing, and write for four or five hours. I don’t work from an outline; I just write – and then rewrite and rewrite and rewrite until I think I’ve finally got it right. Regarding research, I do all the usual things: travel to the places I write about, research things on the Internet, and consult with experts and insiders.

I can’t recall a specific moment when I decided I wanted to write, but I started about twenty years ago. I used to take a ferry from where I lived to where I worked (this was when I had a real job), and the ferry ride gave me half an hour of uninterrupted time every day in which to write. Most writers who are still holding down jobs don’t have this luxury. And then laptop computers came along, it became mechanically easy to write – and, more importantly, rewrite - so I just tried my hand at it and finally, six years ago, got The Inside Ring published.

Regarding the thriller genre in general, the genre is doing great, and it would take too long for me to list all the good thriller writers I enjoy reading. Where do I think I fit in? Well, I think I provide a good alternative style to people who like political thrillers written by such writers as David Baldacci, Vince Flynn, or Brad Thor. My protagonist isn’t like those of these other writers, but my books, which have been nominated for several awards, are just as thrilling – or so I’d like to think.

I’m just finishing my seventh book – going through the final editing cycle – and it’s about DeMarco getting cross-wired with a big, greedy pharmaceutical company who may be killing a few people to develop their drugs. The book is called House Blood, and will be published next summer. My eighth book, which is about half done, is about a woman who’s been accused of insider trading and not only is the SEC after her, but so is the mob.

For fiction, I’m currently reading a book by UK author Mo Hayder, and just finished a book by Deon Myer, a South African writer. Regarding non-fiction, I just finished Too Big To Fail and The Big Short, books about the financial melt-down. 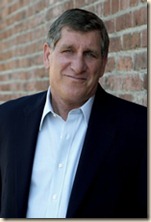 Usually people are most surprised that I’m a former nuclear engineer. For some reason, people don’t expect engineering types to be fiction writers.

The thing I’m most looking forward to – as always – is writing the next book. The best book is always the one you’re working on.

The other thing I’m hoping is that my name will become known to more readers and, for this reason, I’m very grateful to you for doing this interview.

Posted by Civilian Reader at 7:20 AM