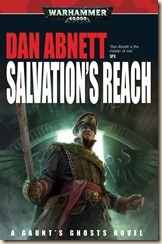 The Ghosts of the Tanith First-and-Only have been away from the front line for too long. Listless, and hungry for action, they are offered a mission that perfectly suits their talents. The objective: the mysterious Salvation’s Reach, a remote and impenetrable stronghold concealing secrets that could change the course of the Sabbat Worlds campaign. But the proposed raid is so hazardous, it’s regarded as a suicide mission, and the Ghosts may have been in reserve for so long they’ve lost their edge. Haunted by spectres from the past and stalked by the Archenemy, Colonel-Commissar Gaunt and his Ghosts embark upon what could be their finest hour… or their final mission.

The thirteenth book in Abnett’s hugely popular Gaunt’s Ghosts series, Salvation’s Reach offers the great action and characterisation that we have come to expect from Abnett, and should please existing and new fans alike.

The novel opens with a pretty intense scene involving Major Rawne, Gaunt’s second in command. There’s lots of close combat. If it was in a movie, it would be filmed with no soundtrack, just the sounds the assailants made; close camera angles, too (think of the scenes in Bourne Ultimatum). Abnett therefore quickly shows once again how good he is at writing conflict – I’ve never read a scene of his (across 13 Gaunt’s Ghosts, three Horus Heresy novels and his Eisenhorn and Ravenor series) that has made me think “deja vu”. He keeps things fresh and exciting, despite having written hundreds of battles scenes before.

The novel is in three parts. In the first part, we get to know a lot more about the everyday life and logistics of an Imperial Guard regiment in the run up to shipping out. Through Elodie’s experiences we get an interesting window into the life of the regimental entourage. She is newly attached to the regiment, having fallen in love with Captain Ban Daur during Blood Pact, the previous novel in the series. This part of the novel, I thought, showed another area that Abnett excels in: making the Imperial Guard more than just soldiers, delving into the lives of their entourage and non-battlefield activities.

The second part of the novel focuses on the regiment in transit to Salvation’s Reach, and we get some void-conflict to spice things up (it’s something we’ve not had much of in this series). The third part of the novel sees Gaunt’s plan executed, and offers up some of the most sustained action and tension in a Black Library novel. It’s awesome – the conflict is seen from a number of angles and different perspectives among the Ghosts. If you like your WH40k fiction action-packed, you may wish Gaunt and company got to Salvation’s Reach quicker, but I think the structure of the novel gives the final assault all the more impact, following as it does a more regimental-perspective of the Ghosts and their expanding ranks.

The action in Salvation’s Reach, as already mentioned, is intense – we get a number of different venues and war arenas, which add a nice bit of variety, as well as upping the ante for the regiment. In each situation – be it void war, open battle, or tunnel fighting – we get a good feel of the emotions warring for attention in the characters. We feel the anxiety when favourite characters are disarming booby-trapped mines; we feel the confusion and disconnection when the enemy surprise our heroes; we feel the loss when a character (peripheral or central) dies or is wounded.

Any review of an Abnett novel cannot fail to mention the action, but Salvation’s Reach is very much about the characters, as well as the life of the regiment away from the battlefront. A few characters who have been more peripheral are brought more to the centre of this novel (for example, the wounded, former-sniper Merrt). The Tanith Ghosts are a dysfunctional family – they struggle with internal rivalries, black sheep, endemic issues, and a grey economy. While preparations are being made for the mission ahead of the Ghosts, newcomers stir the pot, the less-legitimate economy of the entourage and soldiers comes to light (and you will share the officers’ anger over a specific money-making scheme). In addition, Ibram Gaunt is confronted by a big surprise that threatens to compromise his ability to lead dispassionately and in a level-headed manner. It’s nicely and deftly handled, and rounds out Gaunt – perhaps the most established character in the Warhammer Mythos, now, save the Emperor and Horus at this point.

Salvation’s Reach is a shorter novel than some of the previous Gaunt’s Ghosts novels, and it benefits from its brevity. The novel is very well structured and put together – the combination of Abnett’s assured prose and tight plotting meant I read it in three short sittings. The momentum is superb, and I hated having to put it down (to sleep after 3am on two occasions). For me, however, the most important elements of Abnett’s novels are the characters themselves. His decision to focus more on previously less-central characters is another way he has made it fresh and engaging. At the same time, it’s always great to spend time with “Mad” Larkin, the Ghosts’ head sniper; Dorden and Ana Curth, the Ghosts’ lead medics; and Ayanti Zweil, the preacher who is slightly dotty. And, of course, Gaunt himself.

Overall, an awesome novel. Abnett shows no signs of resting on his laurels, and the series and readers benefit from his attention to detail, story, and characterisation. He has pushed and developed this series with each new novel, making it consistently fresh, original and exciting.

Very highly recommended. This is a superb addition to the series.

Posted by Civilian Reader at 10:20 AM