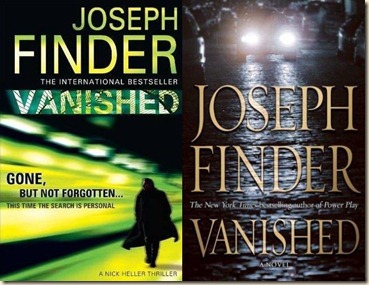 A new action/thriller hero makes his debut, as he searches for his brother

Lauren Heller and her husband, Roger, are out to dinner one night when they’re brutally attacked. Twenty-four hours later, Lauren awakes in the hospital to find that her husband has vanished without a trace. The only one who has any chance of finding him is his brother, Nick, a high-powered investigator with a private intelligence firm.

Nick Heller is tough, smart, and stubborn. Trained in the Special Forces, he specializes in digging up secrets that powerful people would rather keep hidden. He and his brother have been estranged ever since the imprisonment of their notorious billionaire father. But Nick will do anything to protect Lauren and her son, Gabe. He never backs down. Even if it means taking on the most lethal enemies he’s ever had to face.

Plunged headlong into a desperate chase, Nick begins making shocking discoveries about his brother's life — and about the giant defense contractor he works for. Now, in order to keep Lauren and her teenage son alive, Nick must take on a powerful and deadly conspiracy that will stop at nothing to protect its secrets.

One of the great things about Joseph Finder’s novels is that they are populated by believable characters. They are neither overly-good nor overly-bad, they have realistic and natural flaws (even if they’re only vocalised internally, as with Nick Heller). In order to introduce us to the main characters, Finder writes what appears to be an unrelated opening chapter (the relevance of which only becomes clear as the story progresses). Nick's investigation at the airport is a good introduction to what we can come to expect from him: he’s tenacious, detail-oriented, and very good at thinking on his feet (all skills that will serve him well throughout Vanished).

“See, that's my problem. Kind of a personal failing. I get my hooks into something, I can't stop. Sort of an obsessive-compulsive thing.”

Heller's initial job has wider implications, however, and is a reference to one of the greatest scandals and blunders by the Bush administration and the US occupation of Iraq after 2003; namely, the pallets of billions of dollars in cash sent to Iraq as bribe-money for locals and contractors. I remember reading articles about this, thinking it was the most ridiculous policy in a sea of idiocy.

Heller’s job gives us a glimpse into the world of K Street, as Heller works his contacts to get his way and further his investigation, which in turn offers some commentary on corporate and Washington practices and norms. Finder’s considerable attention to detail is on display here. When coupled with his grasp of fine, gripping writing, he manages to make everything sound interesting and worthwhile, never making the reader think they're being attacked by an info-dump. The level of detail did mean Vanished started pretty slow, but I was nevertheless hooked by Finder's prose-style. A rare gift.

“After five years of working the dark side of Washington, D.C., both in the government and out, I had a pretty good Rolodex... I knew someone in just about every three-letter government agency.”

There's some light, gentle comedy whenever Nick is talking with Gabe, unsure how the kid can do anything while listening to bands like Slipknot. Nick’s interactions with Gabe and Lauren show the other side to the novel – as well as a contemporary thriller, with commentary on corporatism and Washington lobbying, the novel takes a good look at the humans involved. Lauren’s fear of Nick discovering the family scandals, Nick’s own issues with his incarcerated father and the brother he grew to dislike but still needs to find and possibly save.

The only thing that remotely disappointed me was the misuse of the word “mates” from a British character (it always comes across unnatural, when written by an American author. It's weird). Other than this, the dialogue in Vanished is always natural and realistic.

Overall, this is a very fine contemporary thriller, introducing a great new protagonist. Finder is very good at setting the scene, introducing us to his characters in ways that let the reader know what to expect (even if it is obvious this is what he’s doing), and also developing the characters so we actual care about them. There’s some good action, tension and a well-developed back-story. I’ve only read one of Finder’s other novels (2008’s Power Play), which I also enjoyed a great deal, but Vanished is even better.

Vanished stands out from a lot of other thrillers because it’s not the most action-packed, and there’s more attention paid to the investigative side of things – in this way, more like David Baldacci and Mike Lawson, rather than Vince Flynn or Brad Thor. This might make the story too slow for some, but I found myself sinking into the novel, eager to see how Nick’s investigation developed and getting to the bottom of the conspiracy.

Finder should be recognised as being in the top echelon of contemporary thriller authors. Highly recommended.

Vanished is published by St. Martin’s Press in the USA

The second Nick Heller novel, Buried Secrets, will be released in the UK in July 2010