An interesting novel about life and immortality. Superb

2019. Humanity has witnessed its greatest scientific breakthrough yet: the cure for ageing. Three injections and you’re immortal – not bulletproof or disease-proof, but you’ll never have to fear death by old age.

For John Farrell, documenting the cataclysmic shifts to life after the cure becomes an obsession. Cure parties, cycle marriages, immortal livestock: the world is revelling in the miracles of eternal youth. But immortality has a sinister side, and when a pro-death terrorist explosion kills his newly-cured best friend, John soon realizes that even in a world without natural death, there is always something to fear.

Now, John must make a new choice: run and hide forever, or stay and fight those who try to make immortal life a living hell.

I knew nothing about this book before it arrived in the post. The premise appeared intriguing and original. Having now read the book, I can say that it exceeded my already positive expectations. It is a great novel, one with depth and an interesting message. 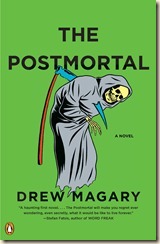 The End Specialist (or The Postmortal, in the US) has quite an interesting structure – it’s put together like a collection of (very well-written and eloquent) blog entries, compiled from the files left over by our protagonist, John Farrell. Magary, an accomplished journalist, has managed to make this structure work very well and it gives the book a quick pace and a compulsive readability that I had not expected.

To begin with, over the first few chapters, there is a gentle comedy running through John’s internal commentary on getting the cure and what it means for him and those around him – from the implications on marriage, never retiring, and also his roommate’s thoughts on getting her period forever. It is a light-hearted introduction to the idea of eternal youth, and the reasons people would pursue it (vanity basically).

John’s writing is drawn from everything around him, from news stories to his own musings and recollections of events and interactions. It makes The End Specialist a very personal and intimate novel, and I found myself liking John immediately. He’s sympathetic, well-intentioned, and above all honest about why he got the Cure, and his thoughts on the issues that arise because of it. Some of the most touching scenes are between John and his father, and also with his family – especially as the decades pass, and John comes to realise how important family is, and the damage eternal youth has done to that dynamic.

After the somewhat lighter beginning, the “sinister side” of the cure, mentioned in the synopsis above, comes to the surface, and the novel takes on an increasingly dark tone. This is, along with Magary’s obvious gift for writing, the greatest strength of the novel – Magary, through John, poses a number of concerns, issues and side-effects of eternal youth that most people probably haven’t thought about (I certainly hadn’t considered some of them). Some of the issues are exaggerations of issues facing the world today – growing populations, contracting resource supplies, aging populations, and the environmental and social problems these bring with them. These problems aren’t spelled out or hammered into the reader’s mind – instead, Magary allows events to show us the dour possibilities of unaging generations and the strain this will put on society, international relations, and the planet as well.

As the world’s population grows ever-larger, and the cure becomes cheap and widely available, a sinister career arises: that of End Specialist. End Specialists help people who have become tired of life, for whatever reason, to end their lives. There are tax and inheritance benefits from taking this route. It is government-sanctioned and outsourced. As the population grows, resources become more scarce, and the country (and the world) becomes more chaotic, the job of End Specialist expands; their purview expands, their powers expanded, and their methods become more paramilitary.

Daydreams about immortality or immortal youth are often selfish – how often do you imagine everyone being immortal? The End Specialist takes these daydreams further, posing questions and dilemmas of global eternal youth and what this means for society. It’s an excellent examination of one of humanity’s timeless quests and aspirations. It will make you reconsider your fantasies. The world becomes the ultimate selfish system, as nations and individuals develop ever-more selfish goals and outlooks. Magary has done a great job of keeping this future all-too-real, tapping into many present-day fears and concerns and extrapolating into the future how the situation will just get worse. It is a chilling picture.

This novel took me by surprise. I read it in two days, staying up well into the night, and was hooked from very early on. It is unlike anything else I’ve read, despite what might sound like a trope of dystopian future fiction. It is compulsively readable. It is very amusing at times. It features a sympathetic and engaging protagonist. It shows heart. It is intelligent and thought-provoking. It is, in a word, superb.

Very highly recommended, this could easily be one of the best books I’ve read this year.

The Postmortal is available in the US already (book & Kindle), and The End Specialist will be published September 29th in the UK, but is available as Kindling already.

Posted by Civilian Reader at 9:39 AM