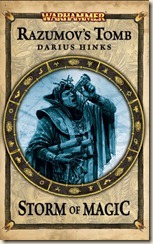 The winds of magic blow strong in the Warhammer world

As the Chaos moon of Morrslieb veers wildly off course, the Old World is wracked by a series of bizarre plagues. From a lofty spire of the Celestial College, the Empire's Grand Astromancer, Caspar Vyborg, scours the heavens for an explanation, seeking guidance in the stars. But as the Empire sinks further into madness and violence, his order is forced to search stranger places than the night sky – the investigation leads them to the grave of a long-dead sorcerer named Razumov and an ancient, half-remembered prophecy. Caspar decides that his only hope is to complete the dark rituals that killed Razumov centuries earlier, but as Morrslieb waxes full and ferocious magical storms begin to tear the very fabric of reality, Caspar learns the true, terrible nature of Razumov's tomb.

The first of three novellas set in the Warhammer world during magically-charged times, Razumov’s Tomb offers up an entertaining, twisted mystery, and was rather entertaining.

Magic in the Warhammer world is based on the premise that wizards, sorcerers and shaman can tap into the “Winds of Magic” from which they draw power for their spells and rituals. These winds blow at different strengths, and this series of novellas are set during times of effectively hurricanes of magic, which makes the chaotic creatures bolder, weather stranger, and the world ever-more dangerous for those who inhabit it.

At the centre of Razumov’s Tomb are two Celestial wizards of the empire. Grand Astromancer Caspar, the aging, slightly dotty and ever-more jealous of his younger colleagues. Protective of his position, he is also paranoid and feeling a bit out of his depth, as the various plagues continue to blight the Empire and he can’t find an answer to them. Gabriel, Caspar’s apprentice, who is altogether odd, a savant-like figure with abilities far beyond what he realises. The two wizards have an academic’s blinkered worldview – seeing everything through a lens of what’s important to their studies and agenda, but often forgetting what else is going on. It is therefore not surprising that they go stumbling into a situation without much preparation; and events (and conspiracies) set in motion centuries before have a habit of biting the unprepared in the ass…

Sent to protect Caspar and Gabriel on their mission to locate Razumov’s Tomb, the pompous and privileged Reiksgraf Niclas von Sudenhorst offers his services. Looked down upon by the veterans who served his father, he is nonetheless totally fearless in his desire to make a name for himself and be written into the history books. Not the most noble inspiration, but it has the welcome effect of making him a pretty inspiring, if sometimes stumbling leader. As the truth about Razumov’s Tomb is revealed, the Reiksgraf steps up to lead the defence against a vast horde of beastmen, driven mad with bloodlust by the abundance of magical energy. And then things start to get even weirder… (I won’t spoil any more of the plot, but it went places I really hadn’t expected.)

The novella is lighter in tone than most of Black Library’s other Warhammer fiction, but this is quite welcome, as it brought to mind some of the earlier short stories from Inferno! magazine, written with a similar sense of humour to Bill King’s Gotrek & Felix or Matt Forbeck’s Blood Bowl series (both of which remain entertaining after multiple reads). It’s not all lightness and humour, however – Hinks creates some brutal, horrific circumstances his characters must overcome, and no one escapes unscathed.

The Storm of Magic offers Hinks the chance to have fun with the setting and play around with over-the-top magic and Chaotic invention, transforming the Warhammer world into something even more fantastical and bizarre. It’s pretty awesome, really, and bodes well for the other two novellas in the series (released over the next two months). Hink’s sense of humour also comes through with some of the background detail – it’s almost Pratchett-esque, and off-the-wall, which was unexpected but entirely welcome. I don’t know why, but there’s something inherently funny about the word “cuttlefish”, especially when there’s been a plague of them. Inland…

Overall, an entertaining and fun Warhammer diversion. If you ever have a short span when you need something quick to read and fancy something in fantasy, then Razumov’s Tomb should certainly do the trick. Solid writing, a quick plot, bombastic magic, and some mystery and conspiracy thrown in for good measure. This was good fun and highly recommended to all fans of the setting.

[Dragonmage by Chris Wraight and The Hour of Shadows by C.L. Werner will be published in July and August, respectively.]