“Choices of One” by Timothy Zahn (Century) 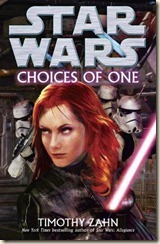 The fate of the Rebellion rests on Luke Skywalker’s next move. But have the rebels entered a safe harbor or a death trap?

Eight months after the Battle of Yavin, the Rebellion is in desperate need of a new base. So when Governor Ferrouz of Candoras Sector proposes an alliance, offering the Rebels sanctuary in return for protection against the alien warlord Nuso Esva, Luke, Leia, Han, and Chewie are sent to evaluate the deal.

Mara Jade, the Emperor’s Hand, is also heading for Candoras, along with the five renegade stormtroopers known as the Hand of Judgment. Their mission: to punish Ferrouz’s treason and smash the Rebels for good.

But in this treacherous game of betrayals within betrayals, a wild card is waiting to be played.

Choices of One, the latest offering by Tim Zahn takes us back to the days between A New Hope and Empire Strikes Back, reuniting us with our favourite characters from the movies as well as some new favourites from other novels in the Star Wars universe. In typical Zahn style, it offers great action and fun, and is one of the best in the series.

The novel starts off by re-introducing us to the main characters at this early stage of the story: Luke, Leia, Han and Chewie are all still figuring out how to work together and get used to each other. Luke’s still adjusting to the lightsaber and his budding Force abilities, and it’s strange to read a couple of situations when he is effectively helpless, and to see how easy it is for a couple of characters to surprise him (reading this after the Fate of the Jedi novels offered particularly stark evidence of just how much his abilities have grown). Han is struggling to find a place in the Rebellion, not used to being out of the loop and being given orders, but forced thus because he is, technically, just another soldier. It was a nice change to see him not fully in control, subordinate (at least nominally) to others.

Mara Jade is still cleaning up messes for the Emperor, and shanghais the Hand of Judgment (the vigilante deserter Stormtroopers that we first met in Allegiance) into helping fix the problem of traitorous Governor Ferrouz, who is apparently angling to shift his support to the Rebellion. Add Thrawn, Pellaeon, and the mysterious Lord Oda to the mix and you have a strong cast of interesting and engaging characters with multiple, conflicting and oft-hidden agendas.

It quickly becomes apparent that what begins as a typical Star Wars adventure will morph into something a lot more. There are some interesting developments that surface mid-way through the novel, which send our heroes on unexpected tangents and presents some new mysteries to solve (not to mention new dangers to survive). Even though we know what happens to most of the characters in the novel, Zahn still manages to keep us entertained and unsure of how things will play out.

We get both sides of the Empire and the Rebellion. We see the well-meaning Imperial subjects – loyal, yet afraid of the tactics used by Darth Vader and Grand Moff Tarkin (the fellow who ordered the destruction of Alderaan) – as well as the darker, brutal side of the Empire. At the same time, the earnest, justice-seeking Rebels are juxtaposed with those in the Rebellion who are just drawn to conflict and chaos, not to mention those who are separate from both sides and just opportunistically trying to take anything they can get.

Given what happens to these characters in the future, it’s difficult to know who to root for, as the Hand of Judgement and Mara are well-meaning and genuinely virtuous, and certain members of the Rebellion are worse than the Empire. Obviously, we know the Empire loses and Luke and Mara end up getting married decades after the events of this novel. This, actually, offers an interesting conundrum for Zahn: Luke and Mara have to remain apart – they don’t properly meet until much, much later. This consideration, keeping two integral characters apart for the whole novel (actually, two novels, as the same characters can be found in Allegiance), is handled in an interesting way that works, and doesn’t feel forced or contrived.

Choices of One has Zahn’s assured writing, and he certainly remains the best author writing Star Wars fiction today. This is an excellent novel. The pacing and prose pull you through, but I never felt rushed, despite the high page-rate I was reading at. There was a slightly slow beginning, but this may have had to do with needing to reorient myself to the earlier timeline after reading so many ‘recent’ Star Wars novel (set roughly 40 years after the events in this novel).

Ultimately, I thoroughly enjoyed reading Choices of One: it has the adventurous feel of earlier Star Wars novels, and it is easily one of the best novels to come out for the series in a few years. A worthy and entertaining return to the franchise for Zahn, this comes highly recommended. It might, however, be best to read Allegiance first, if you’re not quite as caught-up on the other novels now available.

[While reading this, I couldn’t help but think of how the original Star Wars movies would have been received if they were new releases today – or in the past ten years since 9/11, really. It’s got me thinking, so I will probably put something together as a single article to post in the near future.]