Another Look: “The Reapers Are The Angels” by Alden Bell (Tor) 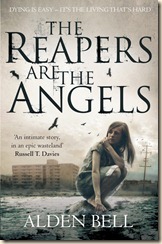 It is a standard of horror movies to wait until close to the final curtain to allow the audience a really decent look at the monster of the tale. When the director does let us stare into the eyes of the beast it is often in the moment of their death. I’ve always felt an uncomfortable tenderness in that brief period of staring. It is a final moment in which it is hard not to feel some kindred spirit with whatever alien creature has been chasing teenagers about this time. For this reason I often find zombies rather hard to hate. Unlike other monsters we frequently do get to stare at them long and hard, and indeed directors often draw great humour from moments of apparent familiarity in their strange behaviour.

The Reapers Are The Angels lives in that tender moment just after you’ve looked too long into the eyes of the monster. Its hero, Temple, is resiliently optimistic in the face of apparent global collapse and as the story proceeds one’s normal feelings of discomfort with pity for the undead begin to dissipate. The author appears to insist on the beauty of life even in its darkest moments. Most of this is communicated by Temple herself. Her musings on the miraculous nature of life and her sense that the unnatural creatures around her are only acting in their ‘natural’ way feels genuine and unforced. At times the point can seem laboured – other characters express similar sentiments, and if this book is missing anything it may be a strong opposing point of view. Rather than screaming at God in the wilderness, most characters in the book are resigned to their fate. Temple’s admirable sense of the value of God’s creation might stand better in relief were we treated to other perspectives, although one could easily suggest that the obvious fact of undead humans eating the living provides relief enough.

The revival of zombies (no pun intended) in recent times is an interesting phenomenon. It has been said that zombie stories of the twentieth century reflect anxiety about communism, fascism, or whichever other oppressive movement you might like to suggest. Such a reading is convincing enough, especially when you consider that zombie movies have tended to focus on the beginning of the crisis – on the invasion itself. Stories like The Reapers Are The Angels, however, focus on the aftermath of the zombie apocalypse. Temple’s world changed before she was even born and her apparent optimism and suitability to the fallen world might well be because she is, herself, a product of it. If one seeks some reflection of western anxieties in the zombie genre,. then it could be suggested that these genuinely post-apocalyptic stories better reflect a feeling that the crisis has already occurred. If the world has fallen then the immediate priority is to learn how to love it again, and this is something that Temple achieves. Temple’s pursuer, a man called Moses, certainly appears to believe that in his pursuit and her escape both are somehow acting out God’s plan. Alden Bell does an excellent job of creating a story in which things appear to click into place in an order of sorts, despite the novel’s chaotic setting.

It would be a mistake to think that The Reapers… is merely a melodrama retold among the undead. It doesn’t lack for dark humour or even graphic brutality and, let’s face it, if you are reading a zombie novel then that’s probably what you have come looking for. It is no great achievement for a horror survival story to leave you with the feeling that you are happy to not be dead – that’s what they’re supposed to do. Alden Bell’s take on the genre really does leave you glad to be alive, but for all the right reasons.

Posted by Civilian Reader at 9:40 AM

Email ThisBlogThis!Share to TwitterShare to FacebookShare to Pinterest
Labels: Alden Bell, Post-Apocalyptic, Review, The Reapers Are The Angels, Tor, Zombies