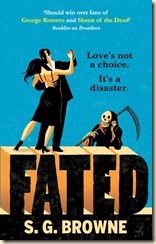 When Fate gets involved with his subjects…

Over the past few thousand years, Fabio has come to hate his job. As Fate, he’s in charge of assigning the fortunes and misfortunes that befall most of the human race – the 83 per cent who keep screwing things up. And with the steady rise in population since the first Neanderthal set himself on fire, he can’t exactly take a vacation.

Frustrated with his endless parade of drug addicts and career politicians, it doesn’t help watching Destiny guide her people to Nobel Peace Prizes. To make matters worse, he has a five-hundred-year-old feud with Death, and his best friends are Sloth and Gluttony.

And worst of all? He’s just fallen in love with a human. Sara Griffen might be on Destiny’s path, but Fabio keeps bumping into her – by accident at first, and then on purpose. Getting involved with her breaks Rule No. 1 – and about ten others – setting off some cosmic-sized repercussions that could strip him of his immortality... or lead to a fate worse than death.

Fated is a slim novel, with lots of fun and clever word play, and is frequently amusing. It’s not perfect, however. The story is a little predictable as Browne adheres to some of the romantic comedy formula. The novel casts a dark observational eye on human nature and its weaknesses, but offers signs of hope for our race towards the end. Overall, it’s quirky, fun, and quickly paced.

Fated is the story of Fate, also known as Fabio. He has been at his job of designating humans’ futures for millennia, and has become tired, bored and depressed by his cosmic role. He travels around the world, fulfilling his obligations, never interfering, growing less confident about humanity’s ability to get anything right. He is jealous of those entities charged with better responsibilities (Hope, Destiny and so forth). A chance meeting leads him to make some important decisions that could have monumental, unintended consequences. As Fabio becomes distracted and wrapped up in his own experiences, the repercussions become too big to ignore, and Fabio’s existence could change tremendously.

There’s lots of word play in this novel. This is in large part thanks to the anthropomorphisation of the Seven Deadly Sins, the intangible and tangible emotions, sins, feelings, and human characteristics (hate, anger, secrecy, ego, guilt, and so forth). Browne trots out a lot of these quite early on (don’t forget, it’s a pretty short novel); at first they’re funny and amusing, not to mention rather tongue-in-cheek. But after a short while it felt like there were a few too many puns being thrown at us. When the story kicks in properly, however, and Fabio starts taking more of an interest in his wards – accidental at first – things calm down and the puns and jokes have more impact because they’re more spread out. The novel is tightly plotted and Browne write some breezy prose – the dialogue is realistic and quickly paced, and the story is constantly moving forward. It’s a very lean, stripped-down novel; there’s no padding so it never felt like it was standing still.

Browne does a great job of creating the personifications of the deities, emotions, and so forth. For example, Death (who goes by ‘Dennis’), doesn’t like dead bodies and often turns up wearing a hazmat suit (gloves and particle mask at minimum). Other examples include Prejudice, who has Tourette’s syndrome, and a number of dysfunctional Deadly Sins. More central to the story, however, are Karma, Sloth and Gluttony, Fabio’s closest friends who provide him with what amounts to a support network and friendly advice – not all of it useful. Also, we have the fiery Destiny – his rival, in a way, and a total minx of an immortal.

As Fabio gets to know Sara, his life and work ethic completely change : he starts to care a little more about his 83% of humanity. I kind of saw where the novel was going, which didn’t really spoil things too much. It’s a good, light read, and there are plenty of endearing moments throughout. Browne does a good job of dressing up his observation of the darker, more depressing side of humanity in light humour about how stupid and bizarre human actions can be.

The relationship part of the story reminded me of Mike Gayle, if he were to dabble in some metaphysical fantasy. There’s a lot more going on with this novel than just an unorthodox love story. As Fabio spends more time with Sara, he starts looking at humans more closely. He starts off thinking of them as walking disasters waiting to happen. Invariably, their life boils down to some sexual deviancy or some violent act in their future. The novel also features plenty of commentary on modern society – particularly American, from its rampant, meaningless consumerism, to the strange moralism that permeates ‘official’ society:

“Not every human being has some kind of sexual hang-up or disorder or desire waiting to be realized. But most Americans do. This probably has something to do with the fact that the United States demonizes sex and represses sexual energy. Personally, I prefer the Italian and French. To them, sex is just part of their culture.”

The commentary is nicely done, and Sara’s innate decency is clearly meant to contrast with the generally depressing impression Fabio has of his charges and humanity as a whole.

Browne throws in a little mystery, as things start going wrong with some humans on the Path of Fate. Forces become arrayed against him as his newfound compassion starts to affect a grander plan. The ending of the novel was not at all what I expected, and is certainly original. (Not to mention a little weird…)

If you’re after something light and fun, something unusual and out of the ordinary, I’d say Fated should suit your needs perfectly. This was an enjoyable read.

Posted by Civilian Reader at 7:24 AM