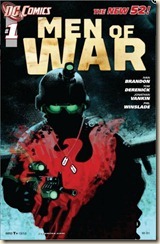 A World War II Hero caught in between battling superheroes

On the ground and on the front lines, a young, headstrong soldier known as Joe Rock assumes the command of Easy Company – a grizzled team of ex-military men turned contractors. Will they survive the battle-scarred landscape carved by the DCU’s Super-Villains?

This appealed to me because the main character was not a superhero with special powers. He and his regiment do, however, find themselves up against some super-powered villains. This issue has a number of extras, including two interviews with other New 52 writers (Batwing and Animal Man), and also a second story, “Navy SEALS: Human Shields, pt.1/3”.

It’s a very atmospheric comic, with lots of action. It’s primary aim is to introduce us to the characters and setting, which it more-or-less achieves, but I think there’s still more needed to decide on whether or not I’ll be sticking with the title. This might be one where a collected edition might suit readers better.

It contains some fantastic “sound effects” throughout, too. Here’s one from a gun-fight:

Men of War finishes on quite the cliffhanger, as the unit finds itself in the middle of a super-power conflict. I really liked that the alternate perspective offered by the story – one doesn’t always consider what happens to those around the super-powered heroes and villains, but Brandon manages to do a very good job.

The art, by Tom Derenik, alternates between panoramic and close-quarters, and has good dynamism. I thought this worked very well for the setting and story. The colour palette is well chosen, and has the feel of every Second World War (colour) movie you’ve ever seen.

The Navy Seals story wasn’t as good, unfortunately, and I’m not really sure why it’s in here. Sure, it’s another military comic, but it has a very different feel to Men of War. The artwork is very different, also, and reminded me a lot of my dad’s old comics that I found when staying at my grandparents’ house one summer.

A good issue, and I like the human-as-protagonist angle, but I think it’s still too early to tell how good this title will end up being. The short format is, I think, its main weakness. Shows some promise, though.