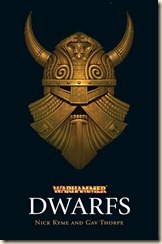 The Dwarfs are a stoic and long-lived race. Their unbending will and pride serve them as fearsome warriors on the battlefield and the greatest craftsmen across the Old World. But cross them at your peril, as a dwarf grudge is never forgotten, a quest for revenge handed down from generation to generation until the debt is settled in blood…

In this action-packed omnibus, the bravery and resilience of the dwarfs is brought to life as they wage war against the twisted powers of Chaos, vile skaven ratmen, brutal greenskins and their oldest adversaries, the mysterious and powerful elves. From the ancient dwarf holds to the killing fields of the Empire, war will be waged in the name of Grungni, Grimnir and Valaya, and no foe shall forget the day they met these unbreakable warriors in battle.

The blurb doesn’t lie when talking about the sheer breadth of this collection. You really get a lot of what the Black Library does best, especially with Warhammer: battles, blood, betrayal and everything else in between. Taking on a vast timeline, Gav Thorpe and Nick Kyme have taken the stalwart Dwarfs of the Old World and woven a fantastic set of tales that constantly keep you reading. A sizeable portion of the book gives details of the culture and history of dwarf kind. If you collect dwarfs in the table top game, or your favourite character from Lord of the Rings is Gimli, this is the book for you. It is an indispensable guide to the trials and tribulations of the dwarf people.

It would be unfair for me to look at this omnibus as a single entity, so I will be breaking this down to look at each book in turn. The first of these is Grudge Bearer by Gav Thorpe. The story takes on a snap-shot feel as you read it, each of the smaller narratives within it concentrating on a specific grudge of the main characters, and it reminded me of the first Gotrek & Felix novel (Trollslayer) in style. This is by no means a bad thing: it allows you to concentrate on one main plot at a time, and Thorpe does do a great job in the end of marrying it all together to finish it off.

The novel also has the feel of a Time of Legends novel in that it spans a huge amount of time. This can be a little confusing at points, especially for me when I was reading the last chapter. Overall, however, the story is quite a good romp into the world of the dwarfs. It delves deep into their culture and lifestyle, and you get an almost encyclopaedic view of the lives of the normal dwarf, the ceremony of their day-to-day activity and of course the awesome nature of the grudge. Also, allowing different grudges to take the focus means you get to see them square off against many different enemies, which is always welcome in a Warhammer novel.

One part that seemed a little out of place and I thought was going to carry on yet didn’t, was the portion featuring Grombrindal, the White Dwarf. He appears in the first half of the book, in a manner that suggests he may return later in the story. However, this doesn’t happen, and it seems a bit shoe-horned in, especially for someone so important – I would have liked to see him return.

The portion during the siege at the end of the novel is incredibly powerful and shows the sheer ferocity of the dwarfs as a race. There is a section towards the end of the battle where you will be really taken aback by the dwarf’s behaviour.

Ancestral Honour is the second of Thorpe’s stories in this omnibus and it follows the reclaiming of honour, something that runs through many dwarf stories. The character of Grimli is likeable and following him as he traverses ancient holds and forgotten pathways is an enjoyable jaunt. It was over too quickly in my opinion, and it would have been nice to see it expanded. Again, you can really tell with this story that Thorpe’s mind was in ‘lore mode’: he has a fantastic grasp of the background material and you can see his army book writing days flowing through the pages. This can mean that portions of a story feel a little stilted or out of place, but it’s never such a problem that it becomes unreadable.

Next on the list is Nick Kyme’s Oathbreaker. This is probably the most forlorn and dark story in the omnibus and truly takes on the mantle of Grim Old World Narrative. Kyme is not afraid of killing off heroes – about a quarter of the way in, one seemingly important character was killed off in a serious ‘What the hell?’ moment. I loved this story, and the way that it weaves a tale of doom and forlorn hope is fantastic. Kyme manages to really tie you to all of the dwarfs as you read and even when the perspective shifts towards the end of the novel between groups doing their own mini-quests, you never have a favourite.

It really is a labour of Dwarfen love for these guys. The detail in the dialogue – adding in little hints of Khazalid (the Dwarf language) and always building on the surroundings they find themselves in – is fantastic. Every room is lovingly crafted as Kyme writes, and you really get a sense of the Dwarf lifestyle (as in Thorpe’s descriptions). These guys know their stunties! Another thing Kyme does well that very few do is dwarf women. I won’t spoil it for you, but the dwarf female character in this book is fantastically written and you really get a good look at the other side of dwarf society. To put the icing on the cake, he even manages to weave a dragon into the story.

Last of the novels, and my favourite of them all is Honourkeeper, also by Nick Kyme. This, much like Grudge Bearer, could easily be a Time of Legends novel, given the subject matter. The story revolves around King Bagrik as his hold deals with the tense moments between the High Elves of Ulthuan and the mountain-dwelling dwarfs. I recently read the Tale of the Sundering trilogy, and was starting to love the pointy-eared princelings from across the sea, but Kyme’s novel has just turned me right back off them. The elf characters in this book are insidiously well done, hovering on that knife edge between likeable and hated, and it’s superb. I did twig to the twist in the tale as soon as it happened, but despite that I don’t think it ruined the reading experience. I still looked at the elf characters in the same light, but it was interesting to try and guess who was in on the secret – a bit of a whodunit, really, which was nice.

As in his other novel in the omnibus, Kyme shows a great grasp of perspectives: he knows how to tell a multitude of stories all at the same time. Even in the heat of massive battles he doesn’t lose track of what’s going on and successfully guides you through to its conclusions. This is another one of those stories where Kyme does dwarf women well, with the queen of the hold, Brunvilda, a fantastic secondary hero. The side-tale running through this concerning her ‘other’ son is also well written and really does play on the dwarf culture, layering their honour-bound and grudge-bearing lifestyle alongside the need for family, really humanising them as a race and allowing you as a reader to relate to them more.

I could go on talking about these stories for many, many more pages, but I must reign myself in and deal with the last little extra at the end of the book. Grudgelore is a wonderful way to end the collection, offering a very detailed look into the history and culture of the race. It is a helpful aid to the stories so you can check the meaning of the occasional Khazalid word, and join in with the jokes of the characters. It even has a fair few short stories within it – while not fully-formed narratives, they are still entertaining and worth reading. I urge you to read this section once you have finished the other three books. Along with the art, it is a fantastic end to a great collection. This book is worth every penny.

Like I mentioned at the beginning of this review, if you like Dwarfs in any form this is the book for you to pick up. It’s a set of fantastic tales woven through with enough culture and history to breath life into the fiction, allowing for a really interesting and rewarding reading experience. You will fall in love with most, if not all, of the characters and despite a few hiccups here and there in terms of pacing it really is a fun read. There are plenty of battles within, and that’s what every good Warhammer fan wants: a real good romp of blood, battle, betrayal, and most of all beards. You will also want your very own Dammaz Kron by the end of it… and you will have to read this to find out what that is! 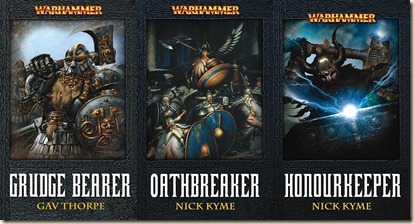 Posted by Civilian Reader at 10:18 AM