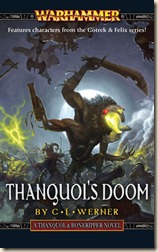 Upon his return to the Old World, the ambitious Grey Seer Thanquol is coerced into leading an army against the dwarfs of Karak Angkul. Renowned for its engineer clans, this city will not fall easily, but the true object of Thanquol’s fascination is a secret artefact of incredible power which he believes will assure his ascension to the Council of Thirteen. His efforts are thrown into disarray when the infamous Skaven Ikit Claw usurps control of the army for his own nefarious schemes, and so Thanquol must act quickly before the warlock can unleash his ultimate weapon – the Doomsphere.

Continuing the tale of the conniving and downright lucky Grey Seer Thanquol and his hapless minion Boneripper, C.L. Werner has woven a tale of backstabbing, dwarfen resilience, and rampant in-fighting in the sprawling Under Empire of the Skaven. The novel starts off with Thanquol scratching a living out in the dankest corner of the world. He works his way back into favour, trying to save his own tail while manipulating those around him to suit his needs. There are plenty of twists and turns throughout, which keep readers on their toes until the novel’s final, epic conclusion in the halls of Karak Angkul.

I have always been a fan of Werner’s work, especially after reading his Witch Hunter trilogy featuring the fantastic Mathias Thulmann. On top of that, being a lover of Gotrek & Felix has also made me a fan of the crazy Grey Seer Thanquol. So, to have the two combined was fantastic – I was excited to see how the story would unfold in this third novel in the Thanquol & Boneripper series, and I was not disappointed. For starters, Thanquol himself is incredibly well-written: the details of his small mannerisms that effect his every motivation, and the way his mind works when confronted with any given situation are great, and really make him come alive on the page. There are a few key moments within the story that really make you smile as the forlorn Grey Seer tries to work out exactly what’s going on, and who is after his blood. Werner is particularly on form when writing about the Skaven and their relationship with warpstone (the magic-imbued and corrupting rock that falls to the world in meteor showers), and what happens when the ratmen use (and abuse) the potent material. You can tell that Werner loves his subject and writing about it, and this enthusiasm is transferred to the reader as well.

There is always the danger when looking at a race like the Skaven of tarring them all with the same brush. It could be far too easy to make them all schemers and one-dimensional, but Werner creates a set of very distinct characters. One who appears towards the end of the novel is the incredible character of Queek Headtaker. Werner seems to enjoy characters that defy the conventions of their established race, and Queek is certainly one of them: Queek is a Skaven obsessed with battle and leading from the front. It’s great to read how Thanquol’s mind reels at the sheer stupidity of Queeks actions. It’s also an example of Werner creating the twisted mirror-image of the foe with Queek’s bloodlust mirroring the bloodlust of the slayer cult of the dwarfs.

Another interesting character is Thanquol’s arch nemesis, Ikit Claw. A skaven obsessed with technology and advancement, Ikit Claw is the equal of Thanquol in almost every way, and another atypical Skaven. It is always interesting to see two superior minds, wracked with indecision and murderous intent facing off against each other in a power struggle. Ikit is the twisted opposite to one of the dwarfen characters in the novel, Klarak Bronzebeard. Both defy the laws of their cultures and are similar in their ambitions to advance their respective empires and cultures. In this comparison, you see that the races are similar in many ways, despite their differences and hatred for each other. Seeing both sides of a very dark and gothic coin is interesting and provides a sense of depth you sometimes don’t get in Black Library novels.

Through other characters in the novel, Werner gives readers a fuller picture of Thanquol, as his interactions with others remind him of previous encounters with, among others, Gotrek and Felix. You see his character grow and expand, adding more depth to him.

As well as paying excellent attention to his characters, Werner has gone to great lengths to explore and describe life in the Under Empire. The picture he paints of the world below is just as colourful and different as the Old World above it. From the beginning in the parched underground lairs beneath Estalia, to the towering ruins of Skavenblight, and then back into the depths beneath the dwarfen mines, Werner has managed to evoke each setting masterfully. All the places Thanquol travels through are unique and fun to read about, showing the depths of Skaven society. While it doesn’t seem like much at first, it’s nice to have knowledge of the kinds of market stalls the Skaven have in their great city, showing that life still continues in the Old World despite the constant war and bloodshed.

I really enjoyed reading Thanquol’s Doom. Seeing things through the bad guy’s eyes was interesting and gave the reader a broader insight into Skaven society. On top of that, it was good to have a Black Library book that allowed me to smirk and chuckle at points, bringing to the world a sense of black comedy that is not always present in Warhammer novels. It felt like an old school fantasy story from the Games Workshop back catalogue that took the tongue-in-cheek tone of forces like Orcs & Goblins and Skaven and wove it into a fun narrative. After novels as serious as the Time of Legend series, it feels good to get a more light-hearted jaunt.

Make no mistakes though; this is still a Warhammer novel. The twist at the end of the tale is one I really did not see coming and really livens up the back end of the novel with a bloody and powerful climax. You should enjoy this novel, and if you’re looking for a little bit of a departure from the normal Black Library books, this should fit the bill quite nicely.