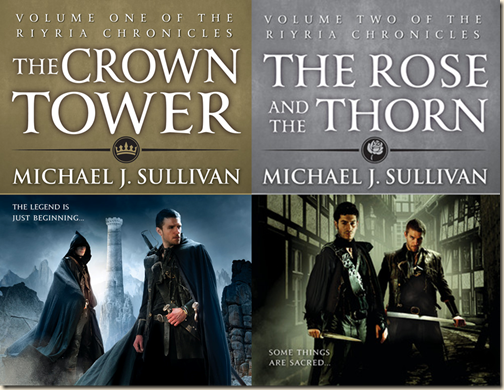 Long-time readers of Civilian Reader will know that I’m a big fan of Michael Sullivan’s Riyria Revelations series (re-issued by Orbit Books in 2011-12). To celebrate the release of a prequel duology – The Crown Tower and The Rose and the Thorn – the author has penned this piece on the historical influences on his series, and the decisions he made on how to approach and incorporate these influences into his fantasy world and narrative.

A good deal of invented-world fantasy is based on history. While much of this may be due to writers imitating other authors who came before them, there is a very practical reason for this: familiarity. When creating a world you’d rather not do it from scratch. Even the best chefs have used frozen pie crusts or stock broth. It just saves so much time and effort and allows you to focus on the more important aspects – the story.

In fantasy you could rework everything. You could do away with leaders or councils and run anarchy. People might not need to eat or drink, but instead soak up sunlight to survive. Of course you might not have a sun either. Instead you might have geysers that emit vapors that must be absorbed. People in the new world might not believe in trade, everyone could subsist entirely on what they alone find or make, hence no economy. There might be no day and night cycle, no seasons, no linear time at all as we know it. There might be no sexes, or there might be five different ones and reproduction could require the coupling of at least three different participants. Anyone of these would be a lot for an author to explain through all of its inevitable ramifications, but all of them and all the others one would need to invent to establish a completely alien world entirely disassociated from our own would both consume massive investment of words and likely bore even the most patient reader to tears.

As a result authors of invented-worlds like to use preconceived ideas already conveniently built in the minds of readers. Characters will use swords, bows, spears and shields, or flintlocks and powder kegs. No need to explain why or what they are. Day and night, summer and winter, years and hours, can all remain the same, because these basic building blocks aren’t worth altering unless that is the focus or theme of the story. Eighty percent common knowledge and twenty percent invented, and readers will have little problem jumping right in and enjoying this “alien” world you “created.”

History is also a great guide for such things as economic and political systems and also work as justification, guides, and proof of plausibility. When I was in art school a friend who was in the photography program scoffed at my efforts to painting still-life. “Why bother when you can just take a photo?” My response was that I wanted to be able to paint what couldn’t be seen, what he could never fit in his viewfinder. Before I could do that I had to master painting what was visible, so I could use that knowledge when I invented what wasn’t and still make it look just as believable. By utilizing the same rules of reflection, shadow, proportions and light, I lend credence to the incredible. This same idea applies just as assuredly to writing fiction.

When I first conceived of the Riyria Revelations, I did so while reading a college text book on Western Civilizations. I studied medieval and renaissance history, which threw off dozens of ideas that I jotted down. The missus dominicus – the agents of Charlemagne – became the basis for the sentinels in the world of Elan. Royce had some roots of his character grow out of a biography on Edward, the Black Prince of Wales. The Church of Novron and the monasteries of Maribor were inspired by the cradle-to-grave dominance of the Roman Catholic Church and the Benedictine and Franciscan orders. The Theorem Eldership came from the secret orders of knights such as the Knights Templar and the Illuminati. The lost empire of Novron was pulled from the Fall of Rome. The elves and dwarves were redefined from the Tolkien-esque tradition into something resembling the minorities of the Dark Ages. Dwarves who once long ago had their own homeland and kingdom were, in the time of Royce and Hadrian, universally disliked, distrusted, and forced into ghettos, but still sought for their uncanny skills. Jews faced similar problems in the post Roman era. In this way, the major themes of ancient life helped provide much of the framework, while the lesser known details provided inspiration for unique set pieces.

I didn’t stop there, however. I mixed and matched. Elan isn’t Earth, so I had no reason to limit myself unless I felt the need. For example, there are potatoes that historically came from the New World and were unknown in Medieval Europe. The same is true for tobacco. Sailing vessels were not at all like the great ships of the Age of Sail – the age of Nelson – but I liked the romance of a three mast ship plowing waves. I just excluded gunpowder and cannons. I loved the imagery and characterization that powdered wigs provided and so tossed those in, but kept armor and the joust from centuries earlier. I used modern military ranks because I wanted to avoid explanations of such basic concepts.

In total, I made specific and personal choices concerning what I would keep accurate and what I would change. There was no standard I followed beyond my personal taste of what I thought would make a wonderful reading experience. I wrote Revelations to be the sort of book I wanted to read, the sort of story I couldn’t find on any shelves. Equal parts realism, heroism, and simple prose so nothing stood between the reader and the story. I felt fantasy had begun taking itself too seriously and in its lofty goal of becoming a Genre Worthy of Respect, forgot the date that brought it to the dance. I felt too much of fantasy had left out the fun, the humor, the sheer blast of joy that comes from taking an arduous journey with someone you come to love and the sweaty fingers that turn the pages as they face the final showdown. This for me has always been the best of fantasy: not the worldbuilding, or the lessons in humanity, but the emotional blowout that for me, only fantasy – free of the baggage of the real world – can provide. This is what divided the books I carried with me, the ones I remembered fondly decades later, and those I forgot I ever read.

Regardless of whether fantasy is historically consistent, dark and cynical, or idyllic and heroic, all that matters is that the story and characters are good enough to make readers laugh, cry, and feel a terrible sense of loss after the last page is turned.

Also on CR: Reviews of The Viscount and the Witch, Theft of Swords, Rise of Empire, and Heir of Novron; Interview with Michael J. Sullivan, Guest Post on Gritty vs. Heroic Fantasy 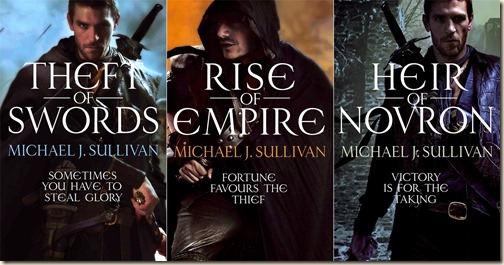