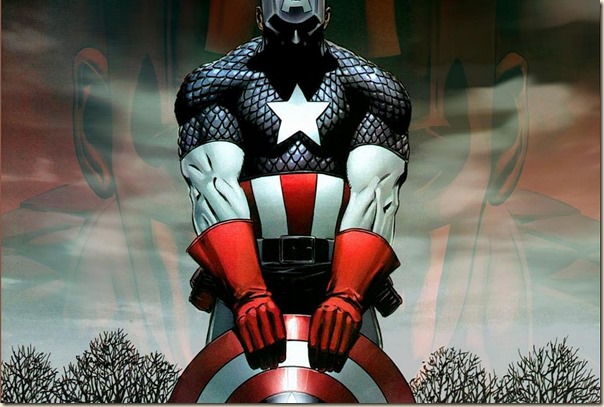 With my new job, I haven’t been spending as much time at my home computer in the past few months. I have not, however, stopped reading. Not by any stretch of the imagination. As a result, though, I have been racking up a lot of sets of notes for books (fiction, non-fiction, and particularly graphic novels) that I haven’t had a chance to feature on the blog, yet. So, over the next couple of weeks, I’m going to try (famous last words) to get a whole bunch mini-reviewed.

Part of the attraction of shorter reviews for many of these graphic novels, along with the lower time commitment, comes from a desire to avoid spoilers. Some of these – as in this review – are volumes that come pretty late in established (or slowly-becoming-established) series. Anyway, let us get on with it. Here are some thoughts on the following Captain America books: The Death of Captain America, Vols.1-3, Man With No Face, and also Man Out Of Time.

DEATH OF CAPTAIN AMERICA Vols.1-3 & MAN WITH NO FACE

Continuing the story begun in Winter Soldier, Red Menace, and Civil War, Ed Brubaker manages to keep this series going very strong. I have no doubt the impact of this storyline would have been much greater, had I not already known about the wealth of series featuring Steve Rogers-as-Captain America that would come afterwards. I can see how it would have been pretty shocking at the time, though. 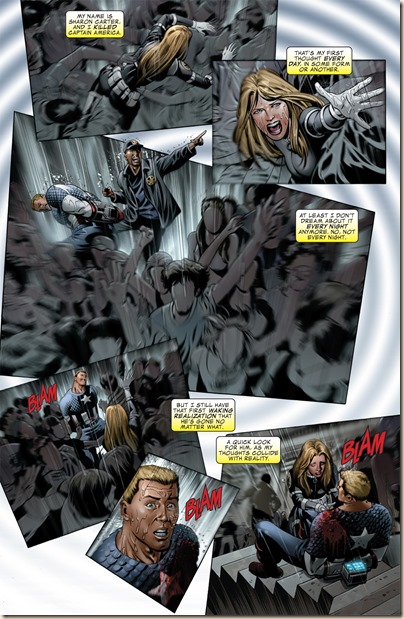 The story is pretty strong, and in the first volume we see how Steve’s death impacts those who have fought alongside him for years and even decades. Brubaker and the art team do a great job of portraying the pall of gloom that descends on the core members of S.H.I.E.L.D., Iron Man, but especially Bucky (Winter Soldier) Barnes and Natasha (Black Widow). We also learn of Rogers’ wish that Bucky should take on the mantle of Captain America. This is quite a contentious issue, given Bucky’s status as a wanted criminal (the Winter Soldier, you’ll remember, was a Russian assassin). What follows over the course of the three Death of Captain America books is a combination of survivors getting to grips with the new reality, a significant amount of soul-searching (without ever getting too ‘emo’), and Bucky’s growth into the role of Captain America. Understandably, it takes a while before our new star-spangled hero gets even remotely comfortable in his new role, and Red Skull and a small clutch of evil minions certainly don’t make things easy.

Speaking of Red Skull et al… I can’t help but think of some of these classic Captain America villains as being rather more cartoony than can properly survive in modern comics, with modern tastes. Certainly, Brubaker & Co. have done a superb job with the story and the artwork (very atmospheric throughout), but the Red Skull, Armin Zola… Too silly, in my opinion.

Sharon Carter’s storyline was a little too drawn out, I think. It was interesting, certainly (and there are a couple of shocking reveals along the way), but I think this could have been handled better, without resorting to some rather cheesy ‘classic’ plot devices.

This problem is sidestepped in Man With No Face, as Brubaker places Bucky’s past – as Cap’s sidekick and as Winter Soldier – at the centre of the conflict. The story revolves around a couple of mission in China, and a decades-long plot for revenge. I thoroughly enjoyed this one (perhaps more than the Death of… storyline, which did start to feel a little dragged out). This fourth book is an interesting story. The eponymous antagonist (sort-of: the Man Without a Face) is truly creepy, but his boss is even more creepy in his lack of super-powers or weird ‘evil’ deformities (I can’t say more without ruining things). The story is filled with slow burn, noirish touches, and I was hooked throughout.

All of these books, but especially the latter, are great, and continue the story brilliantly. For me, Brubaker’s Captain America will always be the Captain America for me. I love this series, and am very glad I have a few more books to read… 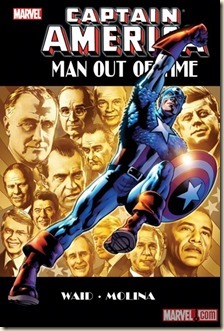 CAPTAIN AMERICA: MAN OUT OF TIME

When the Avengers pull a mysterious, tattered soldier from the sea, they unwittingly bring back to life the Living Legend of World War Two – a man whose memories of a life sixty years ago are as fresh as yesterday! How will Steve Rogers, frozen in suspended animation for half a century, adapt to the world of the 21st century?

This is a great story. We see Steve Rogers slowly come to grips with the new time, from its history and tech to his place within it. Tony Stark gradually brings Cap up to speed and into the modern age, showing him a number of developments, exhibitions at the Smithsonian, and more. We learn of how he survived: it seems that he fell into the sea and (somehow) became frozen on the day Bucky was blown up on a plane (to later re-emerge as the Winter Soldier). 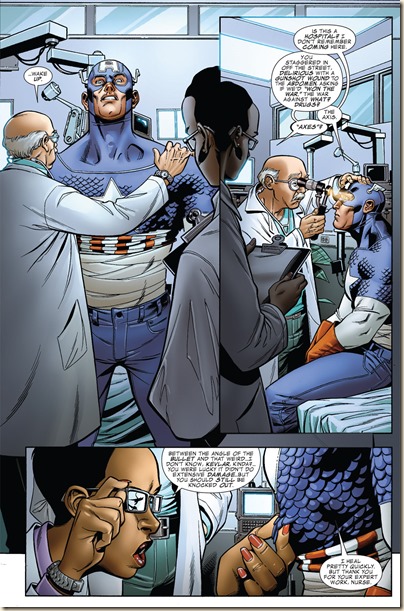 Frankly, Waid knocks it out of the park. It is a brilliant story, written with heart and nuance. The author’s trademark subtle and gentle humour is also on display. Waid also uses Captain America’s reintroduction to his own country as a means to offer up some social, political and cultural commentary, too, which I thought he handled very well.

The artwork is often stunning, and certainly enhances the story (though sometimes the faces were a smidge more cartoony than I like), and this is both a moving and striking graphic novel. The many full-page images, for example, are particularly wonderful and evocatively composed (see below for but two examples).

Man Out Of Time is very highly recommended indeed. A must, in fact, for fans of the character. 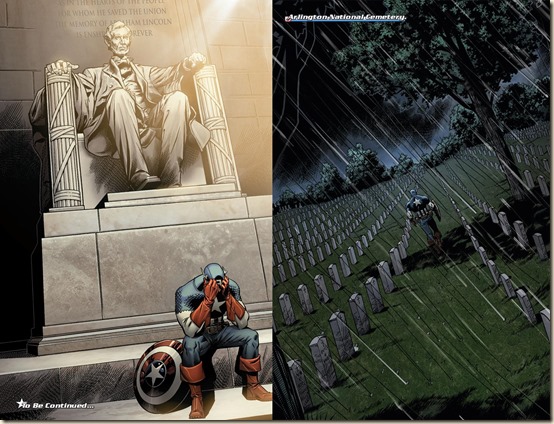