I was at the British Library’s Propaganda: Power and Persuasion exhibition last week. I highly recommend anyone within easy reach of London visit the exhibition (open until September 17th). There are a good number of excellent displays, and even a couple that are relevant to content that has appeared on Civilian Reader. I’m putting together a longer post about a specific piece in the exhibition, but I thought I’d share another of my favourites here today. Namely, “Freedom American-Style” by B. Prorokov (1971): 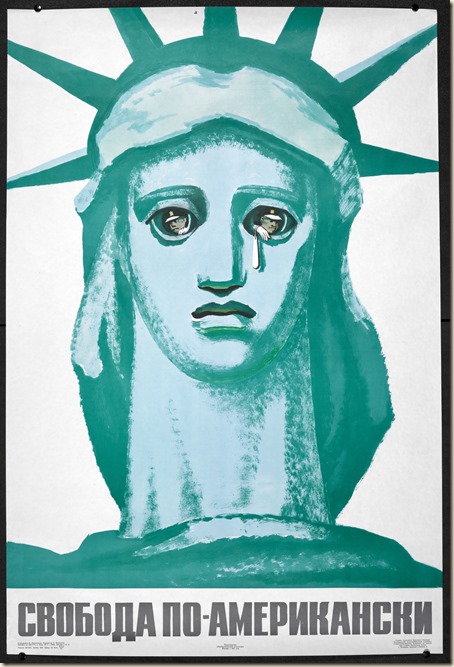 I shared this over on Politics Reader, too, but I thought some readers of this blog might also find it interesting. According to the British Library’s page on the poster:

“… New York’s famous Statue of Liberty is parodied as a look-out tower for the American police to observe its people, mocking the idea that it is a symbol of freedom. The poster attacks and subverts American propaganda that promoted the idea of the democratic freedom of the West.”

Given the considerable prison population in the United States, it would appear that Prorokov’s piece retains contemporary relevance, and probably will for quite some time to come…

Posted by Civilian Reader at 9:40 PM

Email ThisBlogThis!Share to TwitterShare to FacebookShare to Pinterest
Labels: An Aside, B Prorokov, British Library, Cold War, Commentary, Freedom American-Style, Not At All Book-Related, Politics, Propaganda, Propaganda Power and Persuasion