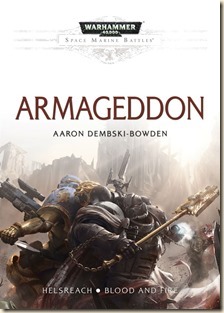 They lied to us about the Mannheim Gap. They sent us there to die. You know of whom I speak. We cannot outrun the echoes of Khattar. We pay the price now for our virtue in the past. The Celestial Lions will never leave this world. A handful of us remain, but we know the truth. We died at the Mannheim Gap. We died the day the sun rose over the scrap-iron bodies of alien gods. ++

Armageddon collects Aaron Dembski-Bowden’s early Space Marine Battles novel, Helsreach, and a new novella set shortly after the events of that novel, Blood And Fire. Both are quite different, and as a long-time fan of the author’s it is interesting to compare them – in terms of style, confidence, and story construction. (Though, fear not, this review is not a piece of academic literary criticism.) Overall, I think this collection is very strong, and while the novella is much better than the novel, both are highly recommended for fans of the author, the series, and science-fiction in general.

I’m going to address each part of the omnibus separately, before providing a brief summation at the end. 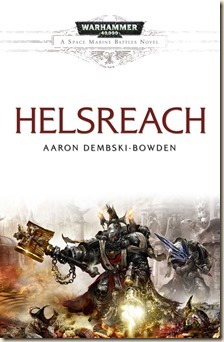 When the world of Armageddon is attacked by orks, the Black Templars Space Marine Chapter are amongst those sent to liberate it. Chaplain Grimaldus and a band of Black Templars are charged with the defence of Hive Helsreach from the xenos invaders in one of the many battlezones. But as the orks numbers grow and the Space Marines dwindle, Grimaldus faces a desperate last stand in an Imperial temple. Determined to sell their lives dearly, will the Black Templars hold on long enough to be reinforced, or will their sacrifice ultimately be in vain?

Helsreach is a very strong addition to the Space Marine Battles series. It is a novel that is both excellent, yet also slightly disappointing. It is an excellent example of military science-fiction, with intense and fast-paced battle and action scenes, strong characters, and a tightly written plot.

Given the series parameters (which is far more combat-oriented), though, I felt that Helsreach doesn’t really give the author the space or time to do what he’s best at: getting into the heads of his characters, exploring the light and dark of conflict, and the psychological impacts of warfare at any length. This is a pity, as I think he approached these themes brilliantly in the Knight Lords trilogy and also his Horus Heresy novels. Helsreach remains a strong novel, however, and I think he certainly fulfills the brief of the series. There are still some very good observations sprinkled throughout. For example, the PR benefits of certain tactics and well-timed speeches, and also when the strategic council discusses the morale-boosting benefit of having the Black Templars assembling in formation before sallying forth, pict-feeds beaming the imagery around the embattled/besieged planet. (Noam Chomsky and John Pilger would have been proud of these observations…)

Despite the slightly diminished focus on character development, there are shades of Dembski-Bowden’s skills evident throughout. I can pick out quite easily the scenes that some early reviewers didn’t like, as they do break up the action and slow down the novel just a smidge. I welcomed these quieter moments, though. For example, Grimaldus’s face-to-face with the princeps majoris of Invigilata, Zarha. It was an interesting scene, he in his imposing armour, her floating in an amniotic tank, on the bridge of a vast war machine. Though even this scene was too short, truncated by the need to get to the conflict.

It was nice to see some brief cameos from familiar characters (Commissar Yarrick, for example, most recently immortalised by David Annandale in his truly excellent novella, Yarrick: Chains of Golgotha). There were also a higher-than-normal number of strong or highly-ranked female characters for a WH40k novel, which is another nice touch.

Above all, though, there are fierce Space Marines of the Black Templar chapter – one I don’t know a great deal about. I must, say, though, that they do seem a rather dour and ferocious lot. Makes for interesting reading. There are also orks. Lots and lots of orks. As I said earlier, there are plenty of solid action scenes, and the author manages to resist the more florid impulses and tendencies of many of his fellow BL stable-mates, keeping descriptions sparse-yet-evocative. A couple of them were still a shade over-long for my tastes.

Ultimately, this is a very good novel of science fictional warfare on a pretty massive scale (So. Many. Orks.), and if that’s what floats your boat, Helsreach should suit your taste very well. However, having read everything else Aaron Dembski-Bowden has written for Black Library, I must admit to preferring his other, less constrained and more nuanced fiction. He’s still my favourite Black Library author, but this is by no means my favourite of his books. 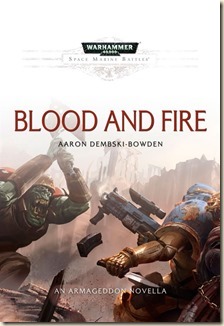 In the aftermath of the war for Hive Helsreach, Black Templars Chaplain Grimaldus receives a unexpected distress call from an old ally. The Celestial Lions Space Marines are being targeted by the Inquisition and have been brought to the brink of extinction. Will they regroup and rebuild, or will they choose to go out in a final blaze of glory? That is what Grimaldus must decide...

In contrast to Helsreach, Blood And Fire is far more reminiscent of Dembski-Bowden’s post-Helsreach fiction. It’s less about cramming in as much bolter porn as humanly possible, and more about exploring the characters involved, their temperaments and motivations. We get to know Grimaldus more (always a good thing, as he’s a really interesting character). The story builds to a fantastic, intense battle. There are a couple of elements of the story that I thought weren’t as well rounded-off as I would have liked (the role of the Inquisition, for example), which could suggest that there is either more to come from Grimaldus – or, less charitably, that this should have been longer (which would have been no bad thing). As with Helsreach, this is a very strong addition to the series.

If you have any interest in the Warhammer 40,000 franchise, then I would certainly recommend this book. Both stories give us an excellent glimpse into how the Astartes and their Imperial Guard allies make war together, and also just how deadly a scourge the orks can be, when rallied under the banner of a gifted warboss. Intense, brutal, yet also deftly written, this is very fine military science-fiction.

Space Marine Battles Series: Rynn’s World, Helsreach & Blood And Fire, The Hunt for Voldorius, The Purging of Kadillus, Fall of Damnos, Battle of the Fang, The Gildar Rift, Legion of the Damned, Architect of Fate (anthology), Bloodspire (audio), Wrath of Iron, Deathwolf (audio), Flesh of Cretacia, The Siege of Castellax, Steel Blood (short), The Death of Antagonis