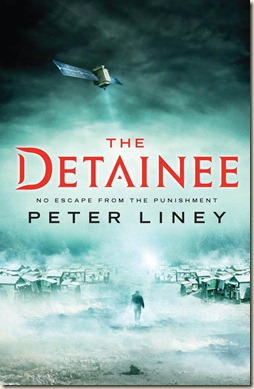 I’m not exactly sure when THE DETAINEE started to take shape in my mind. For a long time I had this notion that I wanted to write a book about the human spirit, about the fact that, no matter how dark the situation, given hope, we always find a way to survive. Like those seeds that lie dormant in the desert, year in, year out, waiting for rain, and when it comes, suddenly burst into the most beautiful of life. Or the victims of kidnapping, political prisoners, those held for no reason and often under the most appalling of circumstances, where do they find the will to survive? To wait for the arrival of that shower of life-giving rain?

So that was my theme, but where was my story? Well, if you’ll forgive me, it started with garbage (yes, I know I’m running a risk saying that, but hey, it’s the truth). Some years ago now, whilst visiting New York, I wandered into the City Library and was greeted by an exhibition about landfill on Staten Island. Ting! Yep, it was one of those writer moments – landfill, rubbish, everything society throws away, what if people were discarded with them? What if they were sent out to live on a stinking pile of waste in the middle of the ocean? Unable to escape, terrorised by fellow Islanders – that would be a pretty good challenge to the human spirit, wouldn’t it? What if society decided to discard all those they could no longer support? Those who can’t support themselves? So many countries in the world are concerned about their ageing populations, about how they can possibly sustain them, and really, the mathematics do seem overwhelmingly simple, not to mention, chilling. How will the few who are still working pay enough taxes to support those who are not? I mean, we can juggle the figures around, make people work a little longer, but is that going to do it? And that, of course, is if all things remain as they are.

What if we have yet another economic crisis? Or should I say, what if this one takes a turn for the worse? What if governments have to make even more savage cuts? No more free education, healthcare, the old left to take care of themselves – what would happen then?

And with story, of course, comes characters. Good, strong characters with clearly defined goals. The courageous Lena, the resourceful Jimmy, the enduring Delilah, and, of course, our hero, Clancy, a reformed villain with an inherent sense of right and wrong. A man to respect, and well-qualified to oversee a life-or-death challenge to the human spirit.

Peter Liney’s The Detainee will be published by Jo Fletcher Books in the UK on July 4th 2013. The Detainee blog-tour continues at the following sites…

There’s more! I’ll be sharing an excerpt from The Detainee this Friday, and with luck I’ll have the book reviewed next week or the one after. Be sure to come back and check these posts out!

CORRECTION: The original version of this post stated that The Detainee was to be published on August 1st. I was wrong. Correct date now mentioned above.