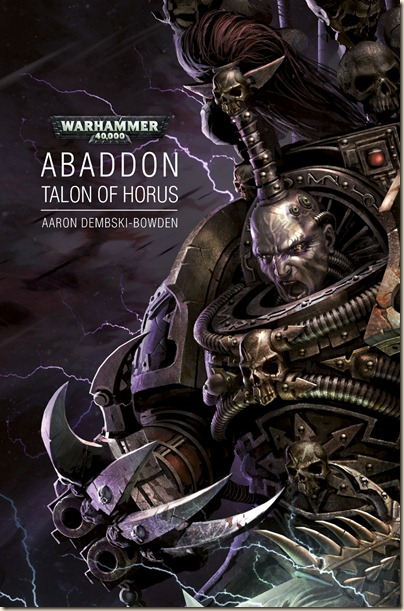 I had no idea this cover had been released, yet, but while on Goodreads adding my latest read to my Currently Reading shelf (Aaron Dembski-Bowden’s Helsreach), I saw this listed among his novels. Complete with a cover. So I did some more digging/Googling, and this post is the result.

Abaddon: Talon of Horus is the first in a new series of novels focussing on the Black Legion and their leader – former first captain of the Luna Wolves/Sons of Horus (who will be familiar to readers of the Horus Heresy series). Naturally, I’m extremely excited about reading this. The author is one of my favourites, period. (Although, that being said, I’m struggling a bit with Helsreach…) Also, as a more personal aside, Abaddon was my favourite model from the Warhammer 40,000 range, when I was younger and paid more attention.

Here’s an early synopsis, which I found on Simon & Schuster Canada’s catalogue…

The rise of Abaddon, successor to Horus and Warmaster of the Black Legion.

When Horus fell, his Sons fell with him. A broken Legion, beset by rivalries and hunted by their erstwhile allies, the former Luna Wolves have scattered across the tortured realm of the Eye of Terror. And of Abaddon, greatest of the Warmaster’s followers, nothing has been heard for many years. But when Horus’s body is taken from its resting place, a confederation of legionaries seek out the former First Captain, to convince him to embrace his destiny and continue what Horus began.

Aaron is also the author of brilliant The First Heretic (Horus Heresy), and the superb Night Lords trilogy (Soul Hunter, Blood Reaver, and Void Stalker), among others.