So, uh, This Really Doesn’t Sound Any Good… 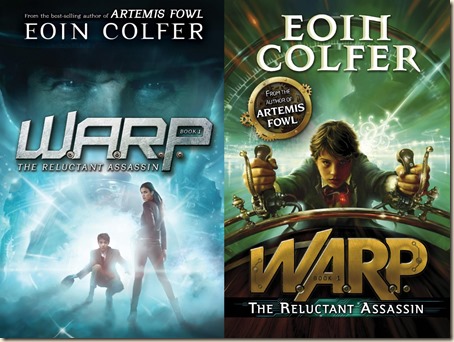 While on Goodreads last night, I stumbled across this upcoming book, the first in Artemis Fowl-author Eoin Colfer’s new series: THE RELUCTANT ASSASSIN (W.A.R.P. #1). The novel will be published by Puffin in UK, and Disney Hyperion in US. Its synopsis is one of the most underwhelming I have ever read…

Riley, a teen orphan boy living in Victorian London, has had the misfortune of being apprenticed to Albert Garrick, an illusionist who has fallen on difficult times and now uses his unique conjuring skills to gain access to victims’ dwellings. On one such escapade, Garrick brings his reluctant apprentice along and urges him to commit his first killing. Riley is saved from having to commit the grisly act when the intended victim turns out to be a scientist from the future, part of the FBI’s Witness Anonymous Relocation Program (WARP) Riley is unwittingly transported via wormhole to modern day London, followed closely by Garrick.

In modern London, Riley is helped by Chevron Savano, a seventeen-year-old FBI agent sent to London as punishment after a disastrous undercover, anti-terrorist operation in Los Angeles. Together Riley and Chevie must evade Garrick, who has been fundamentally altered by his trip through the wormhole. Garrick is now not only evil, but he also possesses all of the scientist's knowledge. He is determined to track Riley down and use the timekey in Chevie’s possession to make his way back to Victorian London where he can literally change the world.

Never before have I read a synopsis for a published novel that was this problematic. First of all, I’m not sure about the trend (or, at least, the beginnings of a trend) in YA novels featuring protagonists that are assassins is a particularly inspired one.

Next up: The FBI are operating in London? Really? They’re the department in charge of domestic US law enforcement! At the very least, Colfer could have picked the CIA, which would have been at least a little bit believable... The clunkiest attempt I’ve seen to keep a novel set in the UK “American accessible/friendly”. And a 17-year-old FBI agent? Sorry, no.

Finally: that steampunk-esque cover on the right isn’t going to fool anyone… The inclusion of Victorian-era characters does not a Steampunk novel make.

If I read this on submission, from a would-be-debut author, I would reject it out of hand. Given the author, I can only hope this is a case of “Someone Doesn’t Know How to Write Synopses”, but if I’m honest I still don’t care.

Email ThisBlogThis!Share to TwitterShare to FacebookShare to Pinterest
Labels: An Aside, Assassins, Meh, Not Anticipated, Not Making Friends Today, Time-Travel, Upcoming, Victorians, YA