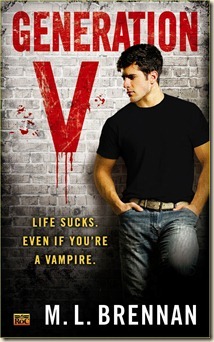 The start of a new, fun vampire Urban Fantasy series

Fortitude Scott’s life is a mess. A degree in film theory has left him with zero marketable skills, his job revolves around pouring coffee, his roommate hasn’t paid rent in four months, and he’s also a vampire. Well, sort of. He’s still mostly human.

But when a new vampire comes into his family’s territory and young girls start going missing, Fort can’t ignore his heritage anymore. His mother and his older, stronger siblings think he’s crazy for wanting to get involved. So it’s up to Fort to take action, with the assistance of Suzume Hollis, a dangerous and sexy shape-shifter. Fort is determined to find a way to outsmart the deadly vamp, even if he isn’t quite sure how.

But without having matured into full vampirehood and with Suzume ready to split if things get too risky, Fort’s rescue mission might just kill him…

Generation V is that rare beast: an Urban Fantasy that managed to both entertain me and surprise me, while also eliciting plenty of chuckles. I’m not as versed in the genre as I perhaps should be, but this was a lot of fun, and I can’t wait for the sequel.

Brennan offers up an interesting spin on vampire urban fantasy (some of which is detailed in yesterday’s interview). For one thing, I liked the Not Born a Vampire, but Born to a Vampire thing – the gradual evolution from human to vampire for those born to a vampire line was pretty intriguing. Naturally, therefore, Fort’s “transition” to vampire, or apparent lack of managing it, forms a good part of the meta-narrative of the novel. The process is kind of random and unknown, and Brennan drops hints about it and the overall process along the way. The vampires in this reality are not the uber-predators we may be used to. Sure, they lack a conscience, and drink blood, etc. But they have extreme difficulty in reproducing more vampires. I liked this.

Brennan offers a lot of detail, but doesn’t get bogged down or over-complex. In many ways, Generation V plays the role of origin story, as the novel has a pretty clear purpose: to introduce us to these characters and this mythology. It does an excellent job, actually. We learn about Fort’s family (see quote below, for his relationship with his siblings), his friends, his manipulative ex-girlfriend, his feckless and douchebag of a roommate.

“My sister, Prudence, fantasized about breaking all of my bones to kindling (as detailed to me last year at Christmas), but Chivalry wouldn’t. He was just giving me a reminder of what I wasn’t. He was a full vampire, and could break a person’s neck before the person even realized he was moving. I was still mostly human, and sucked at sports.”

Fort is an interesting character, and a fun guide to this new world. He is world-weary, but also loves being human, and wants to hang on to it as long as possible. He is also a victim of the economic downturn (sort-of…), languishing in the service industry after graduating from college.

My favourite character, though, is Suzume, who I liked immediately. She’s a lot of fun, and plays a wonderfully mischievous bodyguard with a slight case of ADHD, and a mission to protect Fort. While simultaneously driving him crazy… She’s a “kitsune”, a fox trickster from Japanese mythology, and Brennan does a great job of weaving in this myth into her narrative. (Interestingly, kitsune have featured in more of my reading of late – see Fairest Volume 2, by Lauren Beukes.) Suzume’s clan’s history, however, also presented the only clanger in the novel: while recounting her grandmother’s migration from Japan to the US, the story gets the order of the atomic bombs dropped on Japan wrong, which I thought was a very strange mistake to make (“After the next bomb was dropped on Hiroshima...” – the first was dropped on Hiroshima, the second on Nagasaki…)

The novel is lighthearted in tone (as I mentioned earlier, the story and banter made me chuckled frequently). That being said, Brennan can also conjure up claustrophobic fight scenes and a dash of the sinister, too, and equally skillfully. The author avoids becoming flippant, but does skirt quite close on just a couple of occasions. Generation V is the closest I’ve come across that evokes the style and fun of Kevin Hearne’s Iron Druid series (which is also superb).

Ultimately, this is recommended for anyone who wants their Urban Fantasy with a healthy does of fun, an interesting new twist on vampire and supernatural mythology, and a decent story. True, it is very much part one of a series: it feels like an opening salvo, focusing perhaps too much for some readers on laying the groundwork for something larger and more long-term. But, I had a blast reading this – it’s quickly-paced, tightly-written, and often funny. I really can’t wait for the sequel, Iron Night.