Some more information about Black Library’s ongoing, excellent Horus Heresy series. This is looking further ahead, so there’s even less information available. But, as a Heresy junkie (I have a review of four short stories coming up, as well as the next full-length novel ready to be devoured), here is the cover art for Dan Abnett’s next novel in the series: 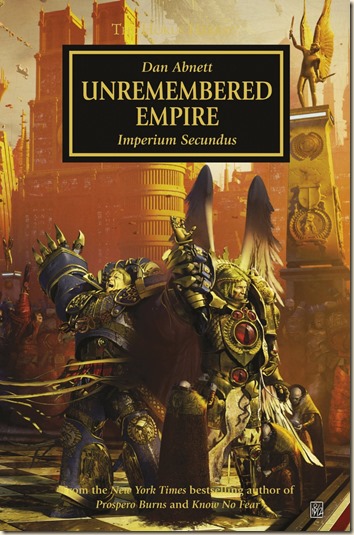 Also, on an interview over on The Bolthole, Dan Abnett had the following mini-snippet to say about the novel:

“Next for me is The Unremembered Empire, which is a direct sequel to Know No Fear and takes the Ultramarines (the survivors) back to Macragge. Then again, Aaron’s (Dembski-Bowden) Betrayer is also a direct sequel to KNF, so KNF is a bit of a branching book. The interweaving is getting more complex and the pace is picking up.”

Here is the full art… 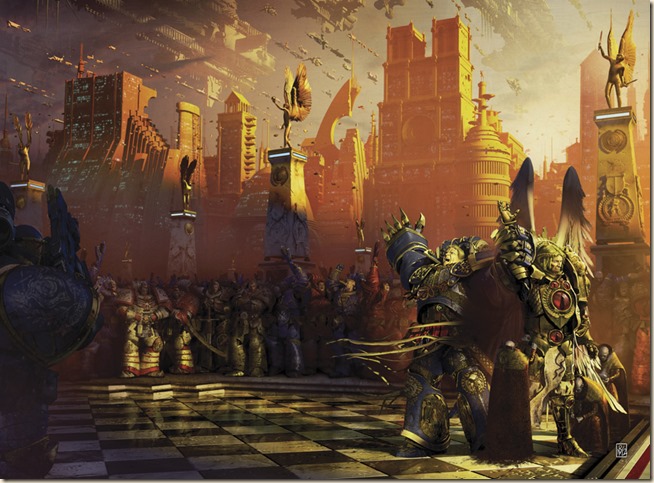 Dan Abnett is the author that kicked the series off with the truly amazing Horus Rising. The 26th novel in the series, Vulkan Lives (by Nick Kyme) will be published very soon.

Believing Terra has already fallen to the Warmaster, Primarch Roboute Guilliman founds the Imperium Secundus.The unthinkable has happened – Terra has fallen to the traitor forces of Warmaster Horus! Nothing else could explain the sudden disappearance of the Astronomican’s guiding light at the heart of the Imperium, or so Roboute Guilliman would believe. Ever the pragmatist, he has drawn all his forces to Ultramar and begun construction of the new empire known as Imperium Secundus. Even with many of his primarch brothers at his side, he still faces war from without and intrigue from within – with the best of intentions, were the full truth to be known it would likely damn them all as traitors for all eternity.

In other Horus Heresy news, I’ve dug up a little bit more for the series’s future. Major hat-tip to First Expedition for this information about other upcoming Horus Heresy fiction, which I found while searching for a synopsis of The Unremembered Empire (which still eludes me…). Here is some of what is still to come in the near future…

Due for publication in November 2013

“Full colour, 100-page graphic novel, hardback to match the rest of the HH series perfectly. This will NOT be available in partwork, nor split into comics, and is being produced SOLELY by Black Library. It follows the naval duel mentioned in 'Know No Fear', between Marius Gage and Kor Phaeron. This will be available in time-limited edition with extra content, as well as non-limited edition later.”

This is pithily described as, simply, “Novel”. Who ever said the art of brevity was dead on the internet…?

“Limited edition novella, which shows what is currently happening on Mars. Techno-heretics are released from imprisonment by loyalist forces fighting a rebellion war on the surface against Kelbor Hal.”

“Literally, what Corax did after Deliverance Lost: attacking a forge world which had begun producing daemon engines. Also described is a ‘battle’ between two floating cities which ‘broadside’ each other for weeks while assault troops jump back and forth between them.”

In addition, two more anthologies have been announced (though, I have no idea where), titled SHATTERED LEGIONS and THE SILENT WAR. Laurie Goulding will apparently be editing both of these books.

Posted by Civilian Reader at 9:47 PM